I get a lot of queries regarding video editing software for Macs on this site so rather than ignore the subject entirely (I use Windows myself) I thought I would do a ScreenFlow Review to at least include one recommendation I feel confident in.

This one is not necessarily the most obvious choice because it started out its life as a screen recording and capture program rather than a video editor. But as they say, “from little things big things grow!”

ScreenFlow originally came to my attention as a consistent recommendation by a number of my friends who are involved in video editing and happen use Macs.

My original assumption was that these guys, who are all producing video in some kind of professional manner, would be using Final Cut Pro or perhaps the Adobe Premiere product but no, they were in fact using ScreenFlow.

When I questioned them on it every one of them said that they had switched to ScreenFlow because using the fully professional programs had become complicated and cumbersome.

It had everything they they needed and using the big pro software was somewhat like using a Sherman tank when all they really needed was a pistol!

Before I get into the review proper, it is important to note that there is always the iMovie product that comes with Mac computers. By all reports it is an “OK” video editor given that it is bundled free with the computer.

However it does have many of the same restrictions that the equivalent Windows Movie Maker suffers from regarding your choices of input and output file types and more advanced features.

Traditionally iMovie was always considered to be the superior program above Movie Maker but it seems that over the past few years Apple have not been particularly active in continued development.

Having said that, if you are just starting out then I would suggest cutting your teeth on this one first as it does provide a good introduction to the various tasks you will be undertaking in video editing.

So with ScreenFlow being the one most recommended to me I got hold of a Mac and a copy of the program to take a look for myself and my thoughts on it are below.

As I mentioned earlier, ScreenFlow began life a few years ago as a screen recording and capture program in the days when doing those things was considered rather exotic.

How times have changed!

It is for that reason that I guess a lot of people overlook this great program but the truth is ScreenFlow has developed into a very, very good video editor.

It has the ability to capture from all kinds if video sources such as video cameras, camcorders, mobile devices etc. or load existing video files you may have.

It is very well suited to the modern batch of highly compressed video file types like .mov, MP4 and files created using the H.264 and H.265 codecs.

It comes with a full range of editing features such as extensive transitions, filters and video effects as well as a newly updated audio module for more precise audio editing.

It has an extremely clean and very user friendly interface with all editing functions easily accessible made even better by the updates in the new ScreenFlow version.

Now I don’t want to start sounding like a gushing Mac fanboi but really!

Why is it that Mac programs generally can get these sleek, clean user interfaces that follow the most wonderful logic in their layouts? 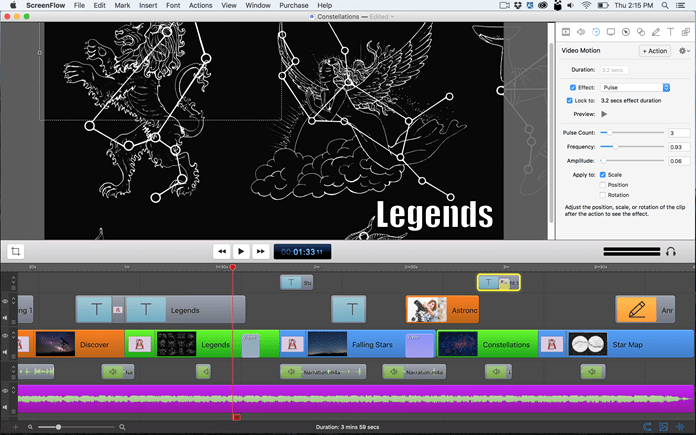 Using ScreenFlow made me realize just how cluttered and clunky a lot of Windows software is and how we have been systematically trained into accepting it!. Ok, end of rant!

The real beauty of the program is that it has been designed so well that when you want to do something all you really need to do is look at the screen controls and somehow it seems obvious how to do it.

It handles HD beautifully and I am not sure why, it just seems to eat them up and process them effortlessly.

A lot of the Windows programs could certainly learn a thing or two from ScreenFlow on that point alone.

It comes with full titling effects and offers very nice audio control. In fact one feature of the audio control worth mentioning is audio ducking. Yes, you read that right! Audio Ducking.

Audio ducking is the action of raising and lowering the background music to suit the main audio track.

For example, if you have a main video sound track of you narrating something or some sort of dialogue with background music as well, normally you would have to manually raise and lower the music depending on when someone is speaking or not.

This is one of the key points that makes a video “appear” professional. Remember, the most important part of video is… audio!

With ScreenFlow the program does it automatically, which is not just totally cool but results in a very professional result without hours of fiddling around with the sound levels.

On top of that the new audio editing features have been beefed up in this latest version allowing for a greater number of tracks to be included in the mixing module.

Cutting and trimming are simply a matter of selecting and dragging the ends of clips or using the scissors to cut sections out and the addition of transitions is dead simple.

Just drag the end of one clip over the next and in the overlap a cogwheel appears. Click that and the full transitions menu is activated offering a full preview of each.

Allround ScreenFlow 6 is a great little video editing software program and if you are a Mac user I don’t see how you could go wrong with it unless you want to get into very complex special effects.