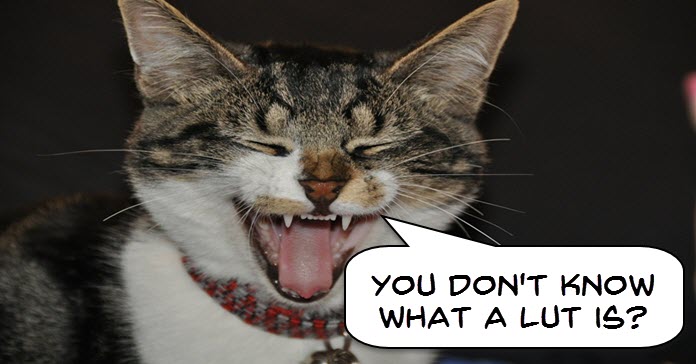 If you happen to be the proud owner of a version of CyberLink PowerDirector that has the color grading module, Color Director attached then you may find this to be of interest.

One of the more advanced features of this software is that it allows you to use LUTs.

LUT stands for Look Up Table and is a table of preset settings to handle color in a particular way.

They can be used to given a uniform “look” to an entire video project or to certain parts of it.

The video below gives a great explanation using of course, cats to show how they work.

The important point to remember here is that for a LUT to be effective, it has to be configured on the basis of the camera that it taking the footage in order to get the desired result coming out the other end.

I mention this because some sites offering free or paid LUTs promote or at least describe them based on the look they are intended to achieve.

However it is not as simple as that.

If you have an iPhone, take footage of your friends and then apply a LUT that promises a “cinematic” look you will not get that result if the LUT was designed for a Canon DSLR!

OK, over the last few weeks I have managed to find a few good tutorials on the subject of green screen.

What I have repeatedly said as an intro to those articles and videos is that the last thing you need to worry about when it comes to green screen is the software.

Most, if not all of the main players offer a module to facilitate the color keying that is needed to achieve this effect.

What I find misleading is that nearly all of those same software makers present green screen as some kind of awesome feature that the software handles for you almost automatically and you can achieve amazing results with the click of a button.

This is so far from the truth it would be funny if it wasn’t so disingenuous.

The truth is that there are many points to consider when it comes to green screen with anything you do in software being easily last on the list.

This week over at the Basic Film Makers YouTube Channel he has put together a long tutorial/rant on the subject.

If you have any interest in this subject then this is the video for you!

It runs a little over 20 minutes but he really covers exactly what you need and what you really need to do to make green screen a relatively painless process resulting in the kind of effect that you have always thought you wanted.

Funny how I came across this article this week because I had just received a question from a reader on why he felt it was taking him so long to execute what he wanted to do in editing.

There simply is no getting around the fact that video editing can be at times one of the most tedious activities you can engage in.

Sometimes it seems that you start a session and by the time you finish and come out, the kids have grown up, moved out and are now introducing you to your grandchildren!

If there is any area in which you can gain some time and truly reduce the stress levels of editing then it has to be that of organization.

I learned a long time ago that if you really want to turn editing into a smoother experience then don’t begin editing until you are organized.

Get your clips named in a meaningful way that lets you know what they are and get them grouped together in a way that makes sense to you and makes sense for the project.

This applies to videos, images and audio clips.

Believe me, there is no greater time suck than that of having to view or listen to some kind of asset in your library in order to identify what it is and whether or not it is the thing you are looking for.

One truly stunning method of shooting videos is to do it against an all white background.

“How to” videos or just about any video of someone talking to the camera can really be elevated by using this simple yet effective technique.

However similar to setting up a green screen the key to it is the lighting.

It is pretty easy for exposures to get a little screwy when there is this much bright white floating about.

The video below comes from a somewhat photographic perspective but the author does include the concept of shooting video and although a little advanced it offers much to the average user.

Good tutorial here on the basics of adding 3 point lighting to a shoot.

The article gives good details as to both how to do it and what the effect various positioning will have on the end result.

Now Cut That Out!

It’s all a matter of perspective!

With most of the main video editing software suites supporting the creation of time lapse videos these days it’s a wonder more people don’t get into it.

With a little time and care some amazing video can be achieved through this process.

My thought is that most people don’t use it because it seems unfamiliar and they probably think it requires some kind of professional video editing voodoo to get it done.

Take a look at this article for some ideas and some awesome examples of time lapse.

Corel release their latest version of VideoStudio this week which takes us up to version 8 and theoretically my new review of that software will be up soon…ish.

In the meantime Gripps has already done a review and this video below which goes into details one of the enhanced features.