Corel proves the zombie apocalypse may not be as bad as we first thought. 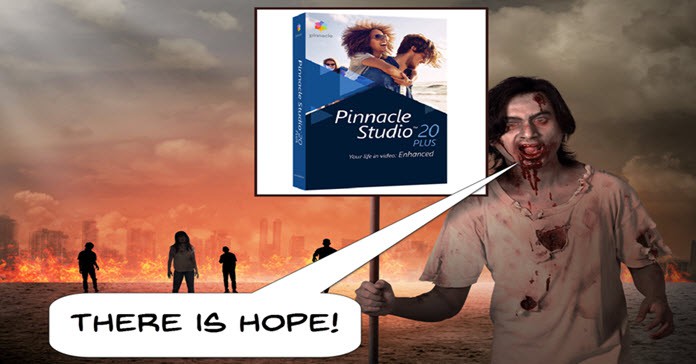 This week I am devoting the Friday Roundup to the release of Pinnacle Studio 20 from the nice people at Corel.

Some of you may be a little surprised at this because let’s face it, I have never included Pinnacle Studio as one of my recommended editing suites.

Well times have changed and the truth is that I have been watching Pinnacle Studio for quite a while now waiting to see what was going to happen to it.

So before I get into the main thrust of the post I think a little history is in order and a little catch up on where we are now with Pinnacle Studio as Corel release version 20 into the wild!

First up here’s the new promo video for Pinnacle Studio 20 to give you a taste of where the software is right now and further down the page a bit more on how we got here!

Pinnacle Studio was released way back at the dawn of the digital video era.

Pinnacle Systems was one of the very first companies to offer any kind of video editing software that could handle those new fangled digital files.

They were I think, the only ones at that time to even entertain the idea that video editing software would be a consumer level product.

Given the limited access people had to capturing digital video, the need for a pretty hefty computer to do the work and the woefully underperforming operating systems at hand, it is easy see why all the others headed off in the “pro” direction.

However it wasn’t long before Pinnacle’s choice proved to be sound and quite soon they had not only secured a pretty hefty market share but the other software makers were exploring ways to simplify their own programs for the consumer market.

My guess was that Pinnacle just lacked the resources to keep up with how fast digital video formats were changing as well as the changes and advances in computers and operating systems.

They always seemed to be trying to play catch-up but never really catching up.

Eventually one of the big professional players in the market, Avid, decided that they wanted to get into the consumer market so instead of developing their own editor outside of their existing offerings, they just bought Pinnacle.

At the time I thought it was a rather dumb move on Avid’s part because they were a company that had no history in the consumer market and what Pinnacle needed to be successful for anyone was going to take two things.

First, an understanding of video editing at the amateur or consumer level and secondly the time and wherewithal to confront and handle the inherent problems the software had.

I think Avid Probably set out with all good intentions but after a few versions, Pinnacle Studio hadn’t really progressed anywhere and was still as buggy as all get out.

Meanwhile back at the ranch….

Corel entered the consumer video editing market also a few years back by buying what was originally Ulead’s Video Studio.

Video Studio was actually the very first editor I purchased and I still have a copy I use on my computer.

Corel too had a little bit of a reputation back in the day for taking good software and turning it into not very good software or at least not really taking it anywhere.

All that changed somewhere around 2009.

At that time the majority shareholder of Corel structured a buyout of all outstanding shares in the company and took control of the whole shebang.

This was a major turning point in Corel’s history and the changes were not only very swift but were also very, very effective.

Suddenly Corel staffers were all over the user to user forums engaging with users and finding out what they wanted.

They set up a dialogue with some of the senior members of that forum and began including them in beta testing new features and releases.

To put it bluntly, instead of swanning about like a bunch of “knows best” princesses they got down into the trenches with the real users of the software and really took the time to find out what was going on.

They didn’t just concern themselves with what was wrong that needed to be fixed; they actively sought advice and guidance as to what those users wanted to see in future development.

The result was that VideoStudio in very short order began to display exceptional levels of stability and the development path was steered in the direction of what people actually wanted.

So back around 2012 Corel announced it was acquiring Pinnacle Studio which I thought was rather a genius move at the time.

Sure they were buying a slightly clunky piece of software but despite Pinnacle’s problems over the years it still boasted a massive market share.

I suspected Corel were going to slowly through the back door, simply swap out chunks of Pinnacle Studio and replace them with bits of VideoStudio until ultimately they were the same software with different branding.

I was wrong on that point and have watched with interest as Corel have set their little code monkeys onto the Pinnacle product and slowly but surely tamed its little “quirks” and moved it forward.

So that brings us to the present where I think it’s time to acknowledge that there really is life after death and Corel have managed to pull Pinnacle Studio out of its zombie like state!

Right now I have a copy of the software in my computer and it is behaving itself very well!

So What’s Corel’s Take on All This?

I will be posting a full review of Pinnacle Studio next week but in the meantime I wanted to get some direct answers from Corel on the program, its past and its future in the Corel stable.

DIYVideoEditor: Although Pinnacle Studio was a pioneer in the field of consumer level video editing it has over the years, established a reputation for crashing and being generally buggy.

Since Corel acquired the software back in 2012 from Avid what steps have you taken to get it under control so that the average person can feel confident trying it out?

Michel Yavercovski: First, it’s important to note that Pinnacle Studio is very different from where it was when we acquired it. Versions 16 to 20 are based on the product previously known as Avid Studio and took a huge leap ahead in terms of features and editing power.

We acknowledge that in the past, users had concerns regarding product quality.

The entire team felt it and we invested in fixing this by working directly with the community to not only hear their concerns, but fix them.

Product development went through a huge philosophical change, moving to a release cycle with frequent updates so we could address any issues as quickly as possible.

We also turned to the community and engaged them in improving the product.

We added a voluntary User Experience Improvement Program that enabled us to characterize the source of many problems.

And on top of regular fix updates, we also started to add new features through the life-cycle.

We have since seen the differences this had made to our users, and see the comments in our forums, online comments and in reviews.

We’re very proud of what we’ve done with this program, continue to invest in development and support, and are always open to suggestions.

DIYVideoEditor: Given that Corel already have a consumer level or amateur level video editor in VideoStudio Pro what do you see as being the main points of separation between the two.

Why would a person choose Pinnacle over VideoStudio or vice versa?

VideoStudio’s focus has always been creativity and being easy to use.

The experience is very intuitive, and users can easily and quickly create videos from templates, easy drag and drop, and an intuitive user face.

VideoStudio is popular for the casual video hobbyist and first time editors – but it also surprises users with its power and ability to do more as the user becomes more experienced.

Pinnacle Studio is without question a more powerful, precise and sophisticated editor.

It enables users to get closer to pro results.

We are the first to acknowledge that its capabilities make it more challenging to learn.

It gives you more opportunities to customize and has more power under the hood.

With options to customize and achieve precise editing, Pinnacle Studio attracts the experienced video editors who are looking for power, precision and specific editing capabilities.

Interestingly, with VideoStudio, we sell more of our simpler and less expensive version, VideoStudio Pro – users are looking to get their foot in the door, and don’t necessarily care about the added bells and whistles in Ultimate.

But for Pinnacle Studio, we sell primarily the Ultimate version.

Actually, we sell more Ultimate versions than Standard and Plus combined.

I think this is telling about the differences between our typical VideoStudio and Pinnacle Studio users and what they care about.

DIYVideoEditor: Simple economics would suggest that at some point Corel would be well advised to simply combine the two existing software suites into one and consolidate their own market.

What do Corel intend to do with the development Pinnacle moving into the future?

We’re committed to both product lines and have no plans to make them into a single video editing product.

VideoStudio and Pinnacle Studio are both exceptional and loved by their users.

Each has characteristics that appeal to a certain kind of video editor.

Plus, they’re each a market leader in different markets around the world.

Yes, you may see some shared development between the products, for example with the multi-camera editor, but they will remain separate product lines that will stay true to the needs of their particular audiences.

So there you have it and judging by my preliminary testing of the program over the past few days it seems Corel have managed a remarkable turnaround for Pinnacle Studio and managed to teach the old dog a few new tricks in the process.