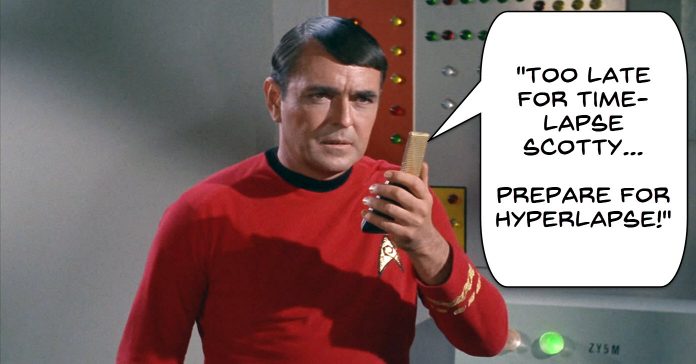 Another post this week on taking your timelapse footage up a notch and turning it into hyperlapse!

Ooh! Hyperslapse, it sounds so exciting!

Anyway simply put, a hyperlapse is just a time lapse sequence but instead of keeping the camera in a fixed position for the entire shoot you move the camera incrementally over time.

It’s sort of like a time lapse only more… hyper!

I have posted tutorials on this before and as always you can just use the search function on the site to find them but this one is a little different.

This tutorial has been specifically designed for shooting hyperlapse in a handheld situation. Look Ma! No hands!

OK, in this case it’s actually no tripod but an interesting technique nonetheless.

Well Filmora seem to be on a roll this week.

Somewhere else in this weeks Roundup there is a video showing how to make effective channel art for your YouTube presence.

This one here is another showing how to make a standard intro sequence for your YouTube (or any others actually) that you can just insert at the beginning of any project.

It’s a good run through the process and they are also offering some free (only for Filmora of course!) templates you can use to create your own into sequence.

In a world of ever increasing competition on YouTube there is pretty much no part of the process that you can afford to ignore these days.

Just uploading and hoping for the best simply will not cut it theses days and although the list if things you need to do is manageable, you have to actually DO them!

One of those tasks is to have an attractive banner on your YouTube Channel.

YouTube is essentially a visual world on the internet.

Everyone on YouTube or visiting YouTube is already “tuned in” to having a visual experience so in any place where you have the ability to improve that experience or to stand out you have to take advantage of it.

The video below is a good tutorial on how to make an effective and attractive banner for a YouTube Channel using a free service and you can download a bunch of free templates to get you started.

A couple of truly excellent videos this week covering an entire editing workflow in both Pinnacle Studio and CyberLink PowerDirector.

They give some great organizational tips on getting yourself setup just right so as to make the editing itself far easier.

In fact if you only did the first two things outlined in each video as the first steps of starting a project you would be well ahead of the game already.

Those two steps, renaming your tracks to suit the project and mapping your shortcuts (or even learning the existing ones!) can make a world of difference to any project you are working on.

OK. First of all let me issue a warning here regarding this video.

In reality it does show a simple setup for shooting overhead shots on interior shoots.

The downside is that the video is about 9 minutes long and the actual explanation of the technique is about a minute.

The rest of the video is just a guy blabbering on and on about why you would want an overhead shot and the difficulties of doing that.

It seems to me that if you were looking for a video on how to setup an overhead rig it would be because you already know why you want it and have already realized the difficulties.

It is kinds of hard to watch the video itself without at some point yelling at the monitor, “Shut up and get on with it!”

How to Make a Photo Slideshow in Mins!

If you are looking for a quick, down and dirty method for making a slideshow then you can’t really go past Filmora on that.

Check out the video below for just how fast and easy it is.

So let’s face it, to most of us there is no difference between “shooting” and “handheld shooting!”

It’s all just shooting to us!

I think very few of us can actually afford the luxury of of carrying a tripod around everywhere we go or at least having a lackey to do it for us… just in case we need to get a few shots!

But that doesn’t mean we are disadvantaged completely.

Within the realm of shooting handheld there are many things we can do and techniques we can employ to end up with interesting footage for out projects.

The article below goes into a few of them and is a good demonstration of being creative despite a lack of resources.

Having said that I think I need to repeat my number one rule for shooting handheld so here it is: Whenever you are shooting handheld the most important point you must keep in mind is that you are SHOOTING handheld!

My point is that often you will see people shooting on the fly whilst at the same time watching the action unfold.

This always results in footage that looks like a three year old was watering the garden with a hose.

If you are going to shoot the action then you must stop being an observer and start being the one preserving that action.

Another good tutorial this week from Tom Antos on using color correction and grading.

What I like most about his tutorials is that they are actually just explanations of how he is doing things in his own actual projects and not in some “theoretical” sense.

Many of his tutorials are perhaps a little (or a lot!) above the level of the average home movie maker but not always.

In this one he goes through the process of taking some footage that was shot on an overcast day which didn’t really match the rest of the footage that would be shown.

He covers how and why he is doing each step and again, it may not be done in the same editing software you are using but generally speaking the ideas are the same.

Some Webcam and Microphone Tips

It’s really hard these days to sift through the mountains of information online and try to work out which is good and which is not so.

This becomes especially difficult when it comes to evaluating cameras, camera gear, software and associated products.

You really have to look at the motivation behind whoever is posting their opinions to get any idea. So with this in mind I think I can pretty safely recommend the link below to the guys at Wistia.

It is a reasonably well balanced look at microphones and webcam setups and provides some good alternatives within an affordable range.