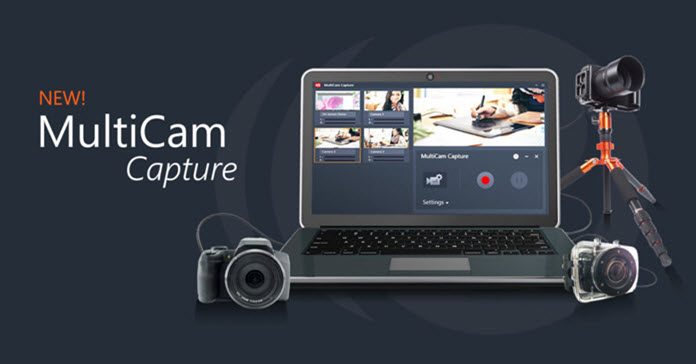 This is a pretty cool new plugin that Corel have “sort of” released this week… kinda.

So the video below demonstrates a product they have released called Multicam Capture.

It is basically a plugin that is for Pinnacle Studio only so far but I would imagine it will get rolled out to VideoStudio quite soon as well.

Once you have the plugin (more on that later) it integrates with pinnacle and you can use it to hook up more than one capture device to your computer at once and have them all record simultaneously.

Because the details on it are still a bit sketchy I would imagine that it will need some petty good computer resources to enable capture from three or four devices at once but the concept is awesome.

You could connect a webcam, a camera and a smartphone all at once and from different angles, record a video.

Then use that captured video in the multicam editing module of the main editor and create a multi-angled video very quickly.

Prior to recording the module also allows you to tweak the color balance and settings of the stream that is coming in from each device to get a good match.

Unfortunately the rest of the details seem to be a bit sketchy.

It is supposed to be available from within the Pinnacle Welcome tab but my copy is not showing it and there seems to be no mention of it on the website… maybe its a secret!

OK, I just found the details and at the moment it is $49.95 and only available through the Welcome screen in Pinnacle Studio 20.5

Probably one of the better Youtube channels around for color grading and specifically the use of LUTs is Casey Faris.

In the video below he goes over some of the basic steps to take when working with LUTs and given that more and more video editors are LUT capable these days it is worth looking at.

Bear in mind that Casey does the video using DaVinci Resolve but as he points out very early in the video, the program being used is irrelevant.

Any software that has some kind of color correction/grading module that can handle LUTs will look pretty much the same.

The second point to keep in mind is that there is an idea that if you take reasonable well taken footage from a cam, load it into software and apply a LUT you will be presented with cinematic genius as a result!

Sorry to burst that bubble but no, that won’t be happening.

A LUT is simply a table of presets that are instantly applied to footage once it is loaded.

The basic concept of a LUT is that when the footage is from a known source then the characteristics of that source footage are also known.

The LUT just applies preset values to that footage because it is known that those presets will get you a long way towards a particular look.

But that is not the end of the story.

The real value is that now you are very close to where you were wanting to go with the footage without having to endlessly tweak the settings.

The final step is to then intervene and make the final adjustments to achieve the exact look you want.

Recently there seems to have been a bit of a revolution over at Filmora resulting in some very high quality content being published.

For those of you that are unfamiliar with Filmora it is a simple and very easy to learn and use video editing suite.

You can read my review of Filmora HERE but the bottom line is that it is my top choice for easy video editing software at the moment.

One of the problems I come across very often in fielding questions on this site and in moderating on some of the forums is this.

People these days tend to have been trained into the concept that because they can’t do something with and editing program or can’t get the results they are looking for in a program then they start looking for another program, an upgrade or some “awesome new thing” to deal with the problem.

Most often I find that the real reason they can’t do something with what they have is because they just haven’t bothered or thought of working out how to do it.

There is a kind of expectation that somehow the software is going to do it.

The prefect example of this is Filmora.

It is very simple, has basically all the features you need to create great videos and is only really restricted by the user!

They have just finished up a series on how to make cooking videos and this week launched into a series on travel videos.

After seeing what they ave on offer it really is worth taking the time to go and have a look at them.

It doesn’t matter whether or not you are using Filmora.

The videos cover all aspects of shooting and editing videos for a particular purpose and are applicable in any field with any video editor.

Add a Picture Inside a Video or Another Picture

This week Filmora have posted another great tutorial video this week covering the Picture-in-Picture effect.

The PiP effect is one of those features that just about every video editor I am aware of comes equipped with.

Like most basic effects features it can be used to achieve results from the sublime to the downright cheesy and it all depends on how it is used.

In my experience I would say that in the main, it is used very, very badly.

In the video below they not only go through the technical steps you need to go through the create the effect but also the presenter is verbalizing his decision making process as he goes along.

In other words you get to see the how of it all as well as the why of it.

This is an important and quite frankly rather unusual piece of information for anyone out there using Handbrake on a Mac.

Apparently hackers have stolen the source code of the software, injected a virus into it and then released it back into the wild.

Now before anyone goes crazy here let’s get this perfectly clear.

This is ONLY Mac users who are using Handbrake and ONLY those who have installed it or updated it in the past few weeks.

If you don’t run a Mac or are asking yourself the question, “What’s Handbrake?”

Relax and move along folks… nothing to see here.

If you think you may be affected click the link below to the original article giving full details and action to take.