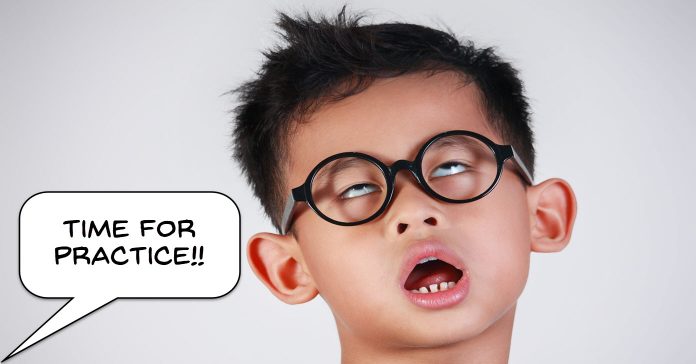 I am kind of leaning towards this video probably being the most important entry for this week’s Roundup.

Back in the days of shooting on film it was very difficult for anyone to get good at shooting as a skill unto itself.

That was because film was very expensive especially when you took into account processing costs.

These days it is a totally different story yet the subject of practice still seems to be mentioned very little.

Practice in itself is something I always refer to when answering questions on shooting or editing video.

You can watch YouTube videos all day long to get endless tips, tricks and tutorials on all aspects of video production.

NONE of that will add up to anything unless at some point you engage in a significant amount of practice.

Then I choose an action like accessing a particular feature in the menu and PRACTICE doing that until I get fast and comfortable with it.

I then repeat this process over and over for all the other things I will be doing with it.

The video below talks simply about the subject of framing.

You can watch all sorts of videos on the subject but until you go out and practice it you will always be slow and clumsy in get your framing right.

The big news this week on the software front was the release of CyberLink PowerDirector 18.

Here’s a cheesy promo video to watch so you can be amazed at the bright, shiny newness of it all!

In all seriousness though this is a pretty good all round update from them.

They have continued their flexible pricing structure offering all of their software on both a stand alone and subscription basis.

My current PowerDirector Review is here which I will hopefully get updated by next week.

Last week I included a video from Derral Eves covering the story of YouTube being fined $170 Million by the FTC for tracking and holding user data of minors watching YouTube videos.

There has been a lot of speculation on and around the YouTube creator community regarding this subject.

As is usual with anything like this that discussion tends to get a little crazy with everyone and his dog chiming in with their own conspiracy theory.

The reason I included Derral’s video was that he is one of the few creators on YouTube that I trust to give a measured and accurate assessment on anything like this.

This week my other “go to” source for all things YouTube Tim Schmoyer, finally came out with a video of his own on this topic.

As he points out in the intro to the video he was well aware of what was going on and did not want to go public with anything until he felt he had all the facts.

That’s one of the reasons he is my other go to guy on YouTube.

So if this latest development on YouTube affects you in any way I would strongly recommend you check it out or if you are just interested in the subject then go for it.

An Overview of Creating Overlays in Pinnacle Studio

I have been using and posting reviews of Pinnacle Studio for a few years now yet I still get surprised at the features you find buried inside that software.

The video below gives yet another great example of why Pinnacle is easily at the top of the heap when it comes to fine tuning and control over your projects.

At this price range most video editors will offer some kind of ability to add and manipulate shapes, text or graphics from inside the program.

The better ones allow for animations and and all sorts of tricks.

Then we have Pinnacle!

Inside that you can create the shape and control every aspect of what that thing does and how it behaves.

It really is quite amazing to think that at this price range these days you get this kind of control.

And here we go again!

Most video editors will allow you to import videos with alpha channels and work with them easily in your projects.

For the uninitiated an alpha channel is simply a transparent background.

So just like you can have a .png image file where the background is transparent you can do the same with a video.

The usefulness of this is that you can overlay something on an existing video and the underlying video is still visible.

The kind of dirty secret to all of this is that most video editors can’t actually produce a video with an alpha channel so you were somewhat restricted in the way you could use them.

You either had to only deal with .png images with transparent backgrounds or you had to source video material that had been produced with an alpha channel.

In the latest version of Pinnacle Studio 23 all that changed so now you can produce (export) a video with an alpha channel yourself.

Nail Your Focus with These 5 Easy Tips

When shooting in HD one of the biggest problems you will hit is that HD is NOT going to forgive you for being a fraction out of focus.

Sure you can pretend you were going for an artistic effect but that trick goes stale very fast!

This reliance on sharp focus very often means that we all end up using auto-focus all of the time resulting in footage that completely lacks any depth of field.

When it comes to shooting video and getting that total amateur look nothing beats a consistently wide depth of field!

Check out the video below for some great tips on how to tame the manual focus on your camera and also how to escape from auto-focus hell!

This is a pretty straightforward tutorial on using the pan feature in PowerDirector to make a shot taken with a fixed camera to appear to have camera movement.

The second part of the video covers using the zoom effect to zoom in on the action again to add some camera movement where there was none before.

Most video editing software will have similar functions to achieve the same thing.

There is one important thing to note about using effects like this… OK there are probably two!

The first is that you need to be a bit tasteful about these effects.

Madly panning around or zooming in and out is not always a good thing!

The second and more important point is that both the panning technique and the zooming technique will require that you isolate sections of the existing video and expand it to fill the frame.

You have to keep an eye on the quality you are achieving during the process because there will be a point where your image quality begins to degrade.

However if you are using 4K footage into a 1080p project you will be bale to take it much further before the quality starts to drop.

How to do a Walk By Transition Effect – FilmoraPro

The transition effect being shown in the video below is not really referred to as a “walk by” transition generally.

Sure in this case they are using someone walking in front of the camera to achieve the effect by really it’s called a mask transition.

That’s because it uses a mask!

The technique remains the same regardless of whether you are using someone walking past the camera or some other object doing the same thing.

You can even use it on footage where objects in the frame are static but it is the camera that’s moving.

How to Get Basic Text in Filmora9

Most video editing software these days offers all sorts of whizzbang, whirly-swirly all singing all dancing ways of creating titles and text in your video projects.

I just took a look at a few editors I have on my computer right now and even the most basic one offers about 40 different preset titling alternatives.

The problem is that with all the hooha about titling you see in most of them the one thing that has been seemingly lost is the ability to just do some simple basic titles!

In the old days you needed specific instructions on how to enhance your titles.

These days you need specific instructions on how to simplify them.

The video below runs through that process in Filmora9 but it basically applies to any video editor with preset titles on offer.

All you have to do is add the preset then simply delete or disable all the whizzbang stuff to get back to basics.