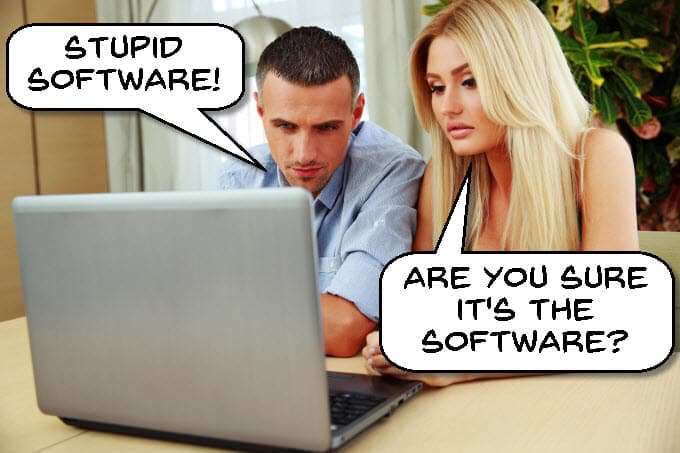 It is pretty common these days for me to receive queries from users regarding problems they are having with their editing projects.

In fact this is one of the most common types of question I get here on this site.

Easily 90% of these questions start off by the user stating that they are having some kind of problem with the software they are using.

This is pretty easy to understand because when you are working on a project and something goes wrong the thing you are looking at is the software.

It is usually the software that is telling you that something has gone wrong.

From that it is an effortless step in logic to assume that the software must be in some way causing the problem.

From there the user generally sets forth on a journey (often not a happy one!) of somehow trying to “fix” or “debug” the software without luck.

These days I find it pretty safe to say that in almost 90% of cases I deal with, the problem is not the software.

So in my experience the fastest way to work out what is going on is to assume the software is fine and the problem lies somewhere else.

If you think about it the software is quite simply organizing things in a way that makes sense visually.

Then based on your wishes, it instructs various components of the computer to carry out tasks on your behalf.

In fact these days I rarely find a situation where it is the software’s fault!

The problem with trying to troubleshoot any video editing or rendering glitch by focusing on the software is that you are instantly blinded to a whole range of other possible sources of the problem.

That’s why when anyone posts a problem on any of the user-to-user forums the very first thing the members of that forum insist upon before they even look at the problem is a shopping list of specifications.

People who answer those questions nearly always find a solution, people who don’t never get an answer because the people on the forums know for certain that it is rarely a software problem.

Does this mean it is NEVER the software? No.

But usually it is something else unseen or not considered by the person having the problem because they have become fixated on the software.

How Do you Make a Video Every Week?

One of the first barriers the enthusiastic newbie blogger or vlogger will hit is the awful realization that after having made a video and posting it… nothing happened.

Undaunted, our generic blogger will then produce another video which like the first, all his friends will say was awesome, yet again, nothing happens.

By now the terrible truth will be beginning to set in and usually it takes only a little research to discover that the road to riches in the world of online video is not quite how it is described on the box.

If he or she is fortunate they will finally hit upon the first rule of success online and that is that you have to keep at it and keep creating content on a regular basis.

Check out the video below from a successful blogger to get some ideas (if this is you) on how to set and maintain a sustainable strategy for creating content regularly.

Color grading is probably the latest “new darling” of the video editing software world at the level of the consumer or enthusiastic amateur.

To be blunt it is a marketer’s wet dream if ever there was one because of a few reasons.

The main reason is that it sounds awesome and the idea of being able to do something that only the big Hollywood studios could previously do has more than enough wow factor to get that sale!

However the reality is that even though most of the major video editing software companies are offering this as a feature the majority of people who access it are most likely clicking out of the module as quickly as they are accessing it!

The real problem with color grading is not really having the tools to do it.

The real problem is knowing what you are supposed to do with those tools once you have them.

I have spent the last year searching for good tutorials or websites… or anything that lays the procedure out for the beginner and I have to admit I haven’t had much success.

So in what seems to be an ongoing tradition of providing access to tutorials that really don’t show you much about how to do color grading here’s another one!

If you are looking for guidance on why you want to do it and how doing it affects your shots or overall projects then this one is awesome.

I just can’t promise it will show you in any meaningful way HOW to do it!

A Little More on Color

Carrying on in the vein of providing you access to tips on color grading that once again give you plenty of WHY but absolutely no HOW here is a great article on color as a subject.

One of the aims of color grading is the creation of a feeling or mood simply by the use of color.

It is just another emotional trigger that film makers use to engage the audience but the question is what colors will give what responses.

The article below doesn’t just apply to film, video, or still images.

It gives a great rundown on what effect a color or range of colors will have on the audience viewing it.

Capturing Video from a Smartphone

These days one of the most popular ways to outline a process or to teach how to do something is to just slap together a screen presentation of it.

With great software on offer for this task like ScreenFlow for Macs, Techsmith Camtasia etc, there is very little you need to know to set this up and get it running.

In fact this kind of video production has become so in demand that the three top video editing programs I recommend on this site all have a separate and integrated module for screen recording.

Now in the past recording the screen on a tablet device wasn’t quite so simple and in fact you really had to jump through some hoops to get it done.

Of course nowadays this has all changed and it really is a pretty simple process… if you know what you are doing!

One of the advantages of using a DSLR camera or an MILC (Mirrorless Interchangeable Lens Camera) is not just the fact that they generally tend to have larger sensors offering better image quality for video.

Unlike fixed lens cameras which tend to try to focus on everything in the shot giving a flat effect, these types of cameras offer something called depth of field.

Now depth of field is one of those terms that gets bandied about on a regular basis usually said by someone who seems to be an authority so we all think it must be a good thing!

Well it is actually but that’s no reason not to at least understand what it is and why.

Take a look at the article and embedded video in the link below to get a really good understanding of this subject so you too can extoll in an authoritative voice the virtues of depth of field!

Given that many video editing projects will include images I thought this guide would be of use.

Inserting images into video projects is a great way of including photos of an event or story that may have been otherwise lost or quietly shuffled to the back of your hard drive without ever seeing the light of day.

However there are some considerations regarding the use of images in video projects that you need to be aware of.

This especially applies to things like resolution, image size etc. all of which can generally be handled OK in video editing software as long as you know what you are doing.