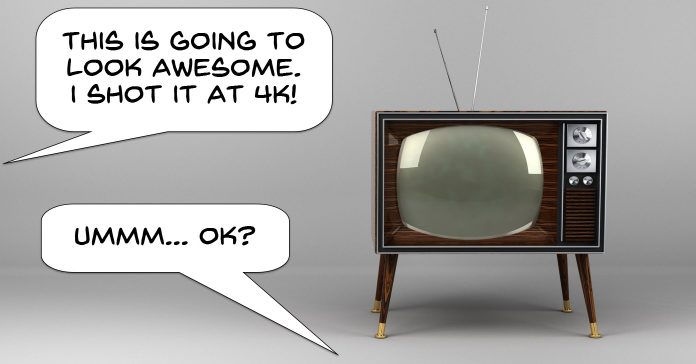 Over the past few years the development of video as a medium has seemingly exploded with advances being made in the creation, editing and distribution of projects.

One thing that is pretty obvious is that whatever is happening at the pointy end of the market will eventually find it’s way down to us average users at some time.

The difficulty in this is that the cutthroat competition within this market means that features and developments are presented to us in a way that makes everything seem vital to have now.

However if you look back in time rather than the future, a pattern emerges which if you take note of it, can save you a lot of money and effort.

A few years ago developments in the area of professional 3D suddenly took a leap forward.

Now bear in mind this was way up the food chain and was primarily concerned with feature length movies shot a la Hollywood.

The reality was that it took special cameras to shoot it, special editing software and super-sized computers to edit it and a special projection system to display it… not to mention wearing in some cases, stupid cardboard glasses!

So what was the result?

At the pro level the public were actually a tad underwhelmed by it all and ultimately if we look at today, there is not much said about it.

At the amteur or consumer level there was a flurry of marketing that jumped on the back of the hype at the time and all of a sudden the big “must have” feature for video editing software was 3D editing and creation.

You simply HAD to upgrade or buy some new editing software in order to get that 3D editing ability otherwise your friends and family would ostracize you in short order!

Of course the reality is that it has all kind come to nothing as time has passed.

So the current spate of marketing is focussing on two fronts.

The first is virtual reality which is a ways off yet if you look at the entire production line from capturing footage, editing it, producing it and finally having some kind of viewing system.

The other is resolution and this one is full of confusion.

4K is the format of the moment despite many people having no way of displaying it anyway but not to be deterred by that we are now getting hit with 8K!

The question is, do we really need it yet? For me the answer is no… so far… we’ll see how it plays out.

Pinnacle Studio 20 have announced an update to their software this week taking it from version 20 to 20.5.

This is a free update for existing users and obviously anyone buying it as of now will receive the 20.5 version.

Pinnacle have addressed a few bugs in this one and have also added some more features so let’s squash the bugs first.

Well the reality of Pinnacle is that Corel have been running a two pronged attack on it since they took it over a few years back.

The first order of business has been stabilizing the software which they have pretty much done.

The other thing they have been doing is getting Pinnacle to look like a modern editing suite and I don’t mean that cosmetically.

I mean things like screen recording, advanced disc burning, motion tracking and a bunch of other features modern software like this would be expected to have.

Of course it is simply not a matter of just slapping that feature into the pot and stirring well to combine!

Every time something gets added there has to be an extensive process of making sure that you didn’t just cause some kind of bug or glitch somewhere else in the program.

So in this release they have added support for single and dual fisheye 360 degree camera footage as well as making some updates to the motion tracking module.

They have also changed the opening screen of the program to a Welcome screen that provides access to the Pinnacle website and more importantly, the training tutorials for the program.

One of the more powerful of the new features is the split screen designer which allows you to create split screen effects way beyond what you can achieve by just using a basic track and a video overlay on top.

You can add all sorts of shapes and designs and save it as a template.

The designer also comes with some preset templates to get you started.

They have also added the ability to export transparent video, improved the multi-camera editing module and added stop motion animation.

Excellent explanation of shutter speed and how it relates to frame rate as well as the effect it has on a video sequence.

Part of the explanation involves a comparison to barn doors and cows so clearly the creator of the video knows what he is talking about!

Excellent tutorial from Filmora from their series on how to make cooking videos showing the use of jumps cuts.

Jump cuts get mentioned often and are explained often but just as often some of the finer points on shooting specifically for them or using are lost.

This one gives a complete run through from shooting correctly to make use of jump cuts and then the editing steps needed to achieve the desired effect.

If you are in the market for making some cooking videos then this one is for you but if not it really does give a great visual explanation of using jump cuts effectively.

Boy, I really need to keep a close eye on what going on at the CyberLink Learning Center!

These are all quite simple tutorials designed to achieve a particular effect or sequence but the real value of them is that they introduce you to techniques that can be applied in other ways.

The first one is the 007 gun barrel effect you see in James Bond movies.

This next one shows exactly how to achieve that “Sherlock Holmes, text moving with an object” effect.

It is a good one to check out regardless of whether you want to carry out that effect or not because it gives a good run through on how to use motion tracking to attach an object to something in a shot and have it follow.

The two examples they give are for looks that match the well known movies, Hacksaw Ridge and La La Land and show how even in a consumer level editing program you can get these kinds of results.