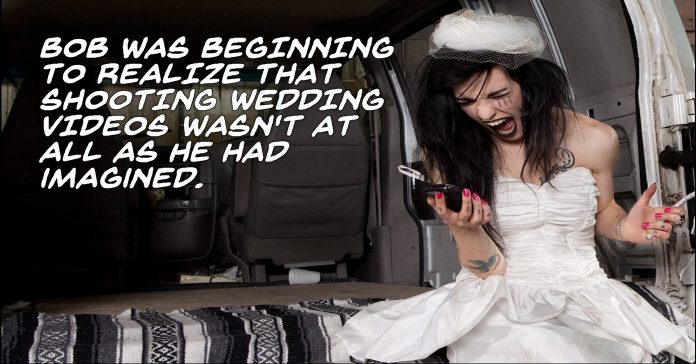 As an introduction to the video below on tips for wedding videos let me just explain myself a little here.

The whole purpose of these weekly roundups is for me to scan through the morass of information presented every week on the subject of shooting videos, editing videos and distributing them.

This is all done with the amateur or enthusiastic amateur video maker in mind and is my attempt to filter out the irrelevant and only include the useful.

So this week it is with some trepidation I present the article below on Wedding Videos!

So here is my warning for anyone who has a video capable camera and has no experience whatsoever in shooting and editing a wedding video.

No matter how confident you feel, no matter how well you rate your own abilities and no matter how much the family, bride, groom or whoever beg and plead… JUST DON’T DO IT!

There are few human activities that are supposed to have their roots in the concepts of joy and happiness, that can create more concentrated insanity than a wedding.

If you are hellbent on doing it then sure, check the article below to get some tips… then just don’t do it!

I think that one of the best ways to learn how to take your home made videos and turn them into watchable content that rises even a little above the rest is by watching what others are doing.

By that I don’t mean to “watch then copy.”

What I mean is to watch certain types of videos, look at what the creator is doing and ask yourself how is he or she doing it and why are they doing it that way.

What techniques have they employed to carry out their mission and is it successful?

By doing this you can expose yourself not only to many different types of videos by a bucket-load of techniques you may never have thought of.

Remember, there are very few truly unique or original video makers around.

I don’t mean that as a disparaging comment on video makers in general.

What I mean is that rarely these days will you come across something that you have not seen before in some other film or project.

Check out the video below that takes a gazillion music videos that have ever been made then creaks them all into three types.

Once you have the type isolated then you can understand what was being used to best convey that particular type of video.

You can do this for just about any genre of video and repeat the process.

Good tutorial on how to freeze, reverse, speed up and slow down footage in Filmora.

Although the specific controls used to achieve these effects will be different in other editors this is a good introduction to using them.

One of the reasons I get a lot of questions on this site about problems with video editing software is because most people really don’t have a great understanding of what it is that really have.

Consumer level video editing software is based on the concept of “a jack of all trades and master of none.”

It is actually five or more separate pieces of software rolled into one and given the “appearance” of integration but at the same time with capabilities that are quite incredible.

Just to give you an example of how complex all this software has become check the article below this blurb for just a few.

It gives examples of techniques like compositing, rotoscoping and mattes that are employed at the pro level for making movies.

As you are watching the videos on that page bear in mind that your average run of the mill consumer video editor can do just about all these things.

The difference is that the pro’s often have a whole department dedicated to each one of them and a specialist piece of software for each as well.

So what you actually have is a video file capture/transfer and organization module, an editing module, a post production module, a rendering module and a disc burning module.

Each one of these individual modules all started out in life as leaky boats attempting to bring the latest and greatest technology to the home user.

Ever since then a bunch of code monkeys being controlled by another bunch of corporate flunkys have been not only trying to plug the original leaks and any new ones that have appeared, but also somehow scotch tape the whole shebang together into one unit.

The reality is that modern video editing software suites do not work on technology as you may have thought.

In fact it all works on the basis of magic!

Commercial discs of any type are not “burned.”

It is only us poor sap consumers do that because commercial disc producers know that’s just crazy!

They actually “press” their discs with a master and even then get a level of error.

I have seen electron microscope images of a burned disc compared to a pressed disc.

A pressed disc looks reasonably ordered, a burned disc looks like an alien landscape and clearly shows us that the only reason a burned disc actually plays on anything is due to as I said before… magic… there can be no other explanation.

Next up we have the disc itself.

One would think that both the Blu-ray and DVD standards are so well entrenched that surely both the creation of the files, the burning process and the discs themselves must be completely standardized right?

So the next time you go through the process of creating a project and at some stage the entire thing just falls over remember that is to be expected, it’s when the whole thing actually works should you be surprised!

Top Camera Movement Techniques to Use in Your Videos

Although the title of this video seems to indicate it is for travel videos only that’s not really true.

Most of the tips and advice generally applies to just about any outdoor type video project.

The creator of the video focuses mainly on the use of gimbals and drones in what he is describing but they are not entirely necessary to the process.

Some Laws of Light

The article below is an essay, and quite a good one I might add, on the subject of light and emotion.

Just like many of the resources I pull together here there may be many of you that are wondering why, at an amateur level, are we going this deep into a subject.

That’s a pretty good question and the answer to it is that I don’t post stuff like this because I think anyone is going to actually use the whole thing in their shooting or editing.

The real reason I post some of these advanced concepts is that by you at least being aware of the existence of a particular factor will make you better anyway.

I am by no means a good photographer, videographer or video editor.

But over the years by reading and watching resources like this I have definitely improved and I have also developed the ability to see that something looks wrong and make a pretty good guess as to what that is and how to adjust it.