You are here: Home / DIY Video Editor Blog / The Friday Roundup – Working it Like a Pro, Sin City and More 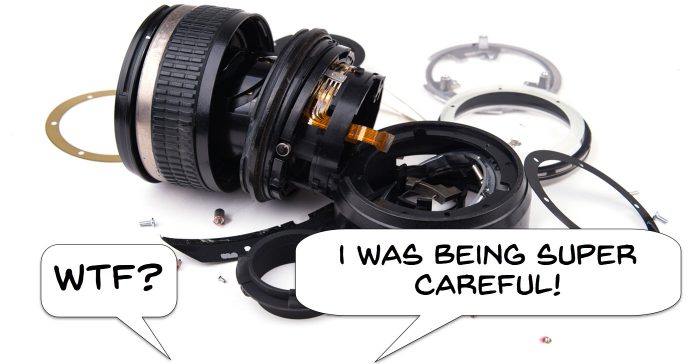 Professionals are not “Careful”

Over the past few weeks I have seem to have been stumbling across a lot of videos showing how to use masks and motion tracking in videos.

Most fully loaded video editing software these days has at least some kind of rudimentary ability to execute these tasks.

Like many editing features we have at our finger tips the one main limit on all of them is our own ability to to use them imaginatively.

Being able to do that depends on a few things like having an imagination in the first place but also something that is not really discussed a lot.

That factor is familiarity.

Becoming smooth with whatever video editing software you have and becoming familiar with what it can actually do are two things that most people tend to ignore.

At the amateur level we tend to only do some editing when we have something to edit.

If we do want to do something a little out of the ordinary we tend to try to learn that thing when we are half way through the edit which is not really a great time to be doing it!

You will find another slightly long rant from me just below in this week’s Roundup on the subject of becoming familiar with your physical equipment like cameras etc.

The same concept really does apply to video editing and getting good at it to the point where it is marginally less stressful comes through practice.

When Roger Federer is playing Novak Djokovic in the final of a Grand Slam tournament, neither of them are at that point… practicing!

They are in reality taking advantage of the fact that at some prior point in time they practiced and as a result of that they are not “carefully” going through the motions.

The same goes for editing.

Learning and practicing half way through an edit is not really going to help much.

The time to practice is when you are not working on a project.

So when I include videos showing some kind of technique in editing software what you really should do is to grab some old footage you have and go through the technique as practice.

Do it over and over until you not only understand the concepts involved but feel comfortable doing it and are not sitting there thinking and thinking about what is the next step.

Now getting back to motion paths and masks etc.!

Last week my son showed me a video of a singer called Billie Ellish in which she cries black tears.

It is just a simple straight on shot and for the life of me I couldn’t work out how they did it.

In the end I figured they had frame by frame animated the black tears which I thought was just crazy! Even then I still had my doubts.

Finally a video came out this week showing how it was done and it was a major face palm moment because in the end all they did was use a motion path, an image and a mask.

Something nearly anyone can do with even a basic video editor.

The secret ingredient? Imagination and a familiarity with what’s possible in editing.

Learn How – Stop Being a Slo-Mo Filmmaker

If you want to know what one of the major differences is between an amateur and a pro then all you have to do is watch one of each, side by side, getting ready to shoot some footage.

The Pro will be set up in a flash while the amateur will still be fumbling and struggling to get everything in place and ready to go.

It is not that the pro is a better person or smarter or anything like that.

It is simply the fact that the pro has practiced and drilled those actions over and over until there is no longer any real thought process going on prior to doing those actions.

It is exactly the same as a child learning to tie his shoelaces.

In the beginning it is a thought heavy remembering exercise followed by slow and careful movements.

Eventually the action is repeated so many times that pretty soon that same child is tying his shoelaces and there is zero thought going into the process… he is just doing it.

The exact same thing applies to you and your equipment and believe me when it comes to cameras, software or anything else you are using for your videos, familiarity does not breed contempt! It creates competence.

There is more on this in the video below.

This is a rather basic run through of using the motion tracking feature in CyberLink PowerDirector 17 and then using the created motion path to attach an image.

Just a couple of points I wanted to add here is that in the demo you will see the automatic motion tracker following the object successfully from start to finish.

Sometimes when the object being tracked is not quite so prominent or large auto motion trackers quite often will “lose” that thing you are trying to track.

The simple solution to this is to watch whilst it is doing its thing and as soon as you see it lose the object stop it, back up to the point where it had the object located, reset the tracking and continue.

Beyond what you see in the video remember that you can use key frames and a whole bunch of other effects once you have created the basic moving path.

How To Make The Sin City Effect In Cyberlink Powerdirector 17

So the Sin City effect in a rather simplified form is that concept of stripping out all the color in a video except for one.

The reason it is called the Sin City effect is because that movie was shot in color then had all the color stripped out in post production except for the color red.

The effect resulted in what appears to be a black and white movie but with highlights and splashes of red throughout.

It really is an amazing looking movie visually but trust me, there was more going on than what I described above to get the final look.

However at a simpler level the effect can be mimicked in most video editing software using filters that allow you to retain one color and removed all the rest.

The tutorial below uses CyberLink PowerDirector and a NewBlue FX plugin to achieve the desired result and also an alternative using CyberLink Color Director.

If you are not running that software don’t sweat it, there will some kind of filter or color effect somewhere in yours that will do the same thing although you may have to dig around a little.

Both Tim Schmoyer from Video Creators and Jeff Bartsch from Story Greenlight are very successful YouTube Creators in their own right.

In the video below they go into some great detail on the importance of story when it comes to making videos that attract an audience.

I understand that not everyone that reads this blog is particularly interested in building a YouTube Channel for fun and profit and that’s not really why I have included it.

The video itself is full of examples of how this basic rule can be applied to anything you produce and is well worth watching.

How to Get the Film Look

Yes this is a video on the subject of achieving a more cinematic effect and yes if you follow along you may get it!

However pay close attention to the first three minutes where the presenter lists out a whole bunch of things that really are the key to getting a cinematic look.

Spoiler alert, nearly all of them have nothing to do with what you can do in video editing software!

How to Make a Time Lapse Video in Filmora

Time lapse videos can be very effective ways to both communicate things in your videos as well as add interesting sequences that will hold viewer attention.

They are relatively easy to execute effectively as long as you know a few basic things.

In the video below the guys from Filmora cover those basics and it should be enough to get you started.

However like most things in life you can always do it just a bit better by understanding the process at a deeper level.

My advice would be to watch the video below then go out and have a play (remember the brand of software being used is irrelevant) with it.

If it does seem like something you may want to explore further then use the search function on this website and you will find a bunch of tutorials on the subject.