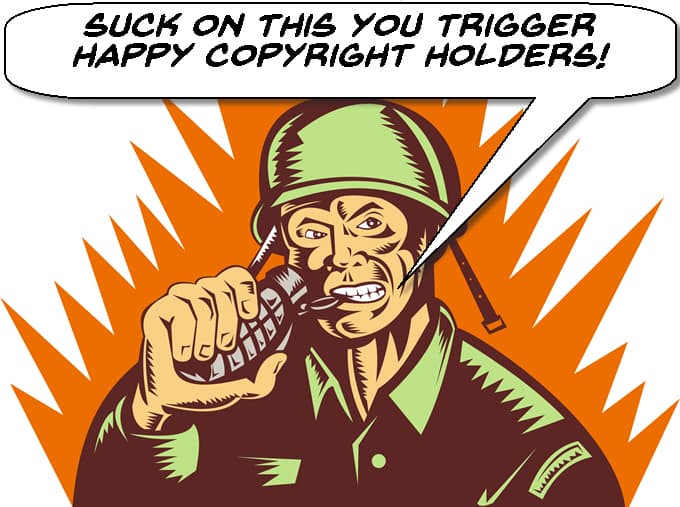 One of the long term sticking points users have had with YouTube has been the policy regarding the application of copyright laws.

The difficulty for YouTube has always been that the sheer number of videos being uploaded has caused them no end of headaches with copyright.

Let’s say a copyright holder considers that his material has been used illegally on YouTube.

The copyright holder then reports the offending material and by doing so is essentially issuing a DMCA takedown notice.

Once that complaint has been lodged then as far as the law goes, YouTube have only a short amount of time to investigate and either take down the video or notify the uploader or refuse to take it down as they found it did not violate copyright.

The problem here is that if the copyright holder takes legal action and wins, then YouTube is liable to some degree because they did not take down the material after being notified of it.

The real problem here is just the number of takedown notices they receive and their inability to wade through all of them on a case by case basis.

This has led to two main situations.

The first is that YouTube under the weight of all the notices they received simply reverted to a takedown first ask questions later policy.

That means they just pull your content off the site regardless of the situation and then it is up to you to then make you case to YouTube through their still slow appeals process.

The upside for YouTube is that it absolves them of any legal responsibility and the downside is that the users get angry.

Getting your users angry is not a good long term business model and they know it!

The second situation to have arisen from all of this is that copyright holders have gotten completely trigger happy just issuing takedowns for any use of their material under any circumstances whatsoever.

What you have to keep in mind here is that anyone can use any copyrighted material under certain circumstances and it is called “Fair Use.”

Fair Use covers things like educational use, commentary, opinion pieces and parodies so if you take a look at many of the videos on YouTube you can quickly see that a very large proportion of created videos fall into those categories.

This week YouTube have announced that they are finally going to take some action in this area and begin to defend the rights of their users against copyright holder abusing this situation.

It is finally a clear warning to copyright holders that the public do have rights and not only can they not expect to have material pulled automatically but they they may find themselves in a legal battle with a very cashed up opponent!

A Tutorial That’s Not Really a Tutorial

Casey Neistat is a blogger or Vlogger given that he almost exclusively uses video, who has built up a pretty substantial audience over the years.

He originally came to prominence when he created a short video called iPod’s Dirty Secret which highlighted at the time that there was no procedure in place by Apple for replacing the batteries in iPods.

He went on to create a bunch of other videos also calling out some of the big tech manufacturers for various questionable practices.

Anyway, not being a big Mac fan or someone that’s into a kind of hipster in New York lifestyle blog I am definitely not really part of his audience.

However this week he posted a video that caught my eye and I think goes a long way in explaining why he is successful.

At the same time it is also a great lesson in how to put together a video that keeps things moving along and keeps you interested in it even though you are not a huge fan or even interested in the subject matter!

In fact Casey ticks a lot of boxes in this video for how to make the type of video that will retain an audience all the way to the end.

Take a look at it for yourself but I want you to take particular note of a few things he really nails.

1. At the beginning if the video he tells you what you are going to see in the video.

In other words he lays out exactly what will be coming.

The importance of this factor in YouTube or online videos cannot be stressed enough.

When you sit down to watch a T.V. program or a movie you have already made a decision about what you are doing.

When someone comes across an online video, regardless of how they got there, they have NOT made such a decision and you have only a very short time to get them to do so.

That’s why you will see over and over on YouTube at the beginning of the videos of the more successful YouTubers that they immediately introduce what they will be covering in the video.

2. That introduction is actually captured later in the day that he is covering when he is at the airport.

So he opens with an intro of the video contents at the airport the cuts to footage earlier at 3:00AM when he woke up.

3. He keeps the shots in the edit short and to the point and maintains a fast pace throughout.

It’s a “going on a trip to Cuba” video and there is a sense of moving all throughout except when at the airport waiting.

When he hits that point the cuts start to slow down to match the waiting.

4. The music is appropriate.

It doesn’t matter that you like it or not, it is appropriate so adds to the video and does not distract.

When he talks to the camera he conveys very well that he is talking to you, a person.

6. Most of the footage is handheld or on a selfie-stick yet he is careful all the time to maintain a reasonably steady hand to make the shots watchable.

7. He includes mistakes and sometime re-takes of scenes or scenes that are interrupted and by adding them, makes the audience feel included.

Well that’s a few of my observations on it, take a look and see what you can get out of it.

Over on the Frugal Filmmaker this week he posted a pretty good video (below) on the subject of making mistakes and learning from them.

Of course this would seem to be a tired old theme to many but to the smart people it is well worth remembering.

In the world of marketing there is a concept that you have to get whatever it is that you are producing in front of the public as fast as you can.

This usually means that the content you are producing is never ever perfect.

It is never going to be exactly how you want it to be and that you just have to live with that.

Because the player in that game that gets his content in front of the public first always, always wins the game.

The same could be said for producing your video projects.

Very often you will be in a project and it is going on and on with no end in sight.

The trick here is no matter what you think, just finish it as best you can at that time and send it out regardless.

Although that may seem difficult to understand you have to look at it from a learning point of view and the only way you can learn is by experimenting, doing, producing then reviewing.

Bear in mind you can’t review what you haven’t yet produced!

That’s the whole reason even the big budget Hollywood movies have completion dates that absolutely must be observed and the failure to make those dates results in heavy financial penalties for all concerned.

Because years and years ago the big studios learned that even the best Director will edit and re-edit on and on and over and over forever if they are allowed to.

Once you have built up a few projects and some time has passed it is then that you can go back to those projects and see clearly where you went wrong and how to make it better.

One of the greatest traps you can fall into in just about any creative process is trying to simultaneously critique a project at the same time that you are creating it.

The two activities simply cannot survive together and bring about a positive result.

It is only with time that you can reset your perspective on the project and see it with fresh eyes.

Now that the new Star Wars movie is upon us the inevitable question is bound to come up so here is a tutorial from CyberLink on how to do it.

I am glad you asked!

The question was is and always will be, “How do you make the rolling credits sequence like they do at the start of Star Wars?”

Just follow the link below and all with be revealed!

Hide Behind A Tree Tutorial

Simple little tutorial showing an easy way to have something or someone appear from behind an object like a tree.