You are here: Home / DIY Video Editor Blog / The Friday Roundup – Pinnacle Studio Goes to Version 21.5 and other stuff! 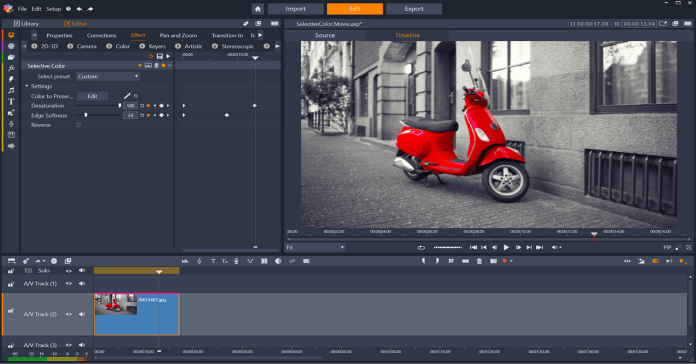 News from Pinnacle this week with the release of Pinnacle Studio 21.5 Ultimate.

Since Corel took over the ownership of the Pinnacle range of products a few years back they have pulled it into line with their existing update and upgrade release schedule.

Generally speaking this means that the software gets two major upgrades per year with the “.5” upgrade being offered for free to existing users.

Generally these mid-year upgrades introduce a couple of new features as well as consolidating any patches or fixes that have been released in the previous six months or so.

In this release of Pinnacle Studio 21.5 they have added two new features called Selective Color and Seamless Transitions.

Selective Colors is a module that makes a particular style of color grading faster, more accessible and easier to complete.

To get an idea of it think of the movie Sin City.

In that movie all backgrounds and characters in most scenes had the color stripped out of them so as to appear back and white.

At the same time a prominent feature of a character like lips or even objects like clothing had their (or its) color heightened into a strong primary red.

This can be done in most editing software as long as you have the time to work your way through it almost at a frame by frame level.

The new Selective Colors module allows to (almost) point and click you way to the same result.

The second new feature is one I particularly love because it is a subject close to my heart! Transitions!

If you have read this blog at all you will be aware that barely a week goes by that I don’t somehow get up on my soapbox and decry the use of pre-packaged transitions that come with all video editing software.

No pro editor used them EVER so you shouldn’t either.

On the other hand crafting individual transitions for every cut in a project can get seriously tedious, seriously fast!

The new Seamless Transitions module in Pinnacle Studio Ultimate 21.5 may very well be the answer to my prayers!

It then offers a range of tools that allow you to control how the two clips transition from one to the next creating a truly unique transition every time. Very nice.

I was hunting around YouTube this week for a particular piece of information and was going through a few videos one after the other get what I wanted.

At one point I realized that I had actually gone past a few videos that had the information I wanted but had dismissed those videos and moved on.

That stirred my interest a little so I went back over a few of those ones I had dismissed trying to work out why I had just kept going past them.

What I found was that even though the videos had the information I wanted the person presenting the video was making me feel as though it did not.

The reason for that was because the person presenting the information looked uncomfortable or not relaxed on camera so instead of me absorbing the data I was preoccupied with just looking at the uncomfortable presenter.

If you are using YouTube or a similar service to distribute your videos and those videos require you to be on camera you have to look relaxed and comfortable.

If you don’t look relaxed and comfortable your audience will miss most of what you are saying and themselves feel uncomfortable.

So I changed the search I was on an found this excellent video on a few tricks you can use to get yourself more comfortable on camera.

There is a popular meme in the form of a GIF going around at the moment based on a particular shot from the series, Stranger Things.

Rather than me try to explain it, just check the video below which covers what the effect looks like originally and how you can simply achieve the same thing.

The tutorial used Filmora but the concepts are exactly the same in any video editor.

For a lot of people setting the correct parameters for uploading to YouTube can be a bit if a nightmare especially when you have footage that doesn’t quite fit the norm.

Getting your footage suitable prior to uploading for YouTube is vitally important because of one basic fact that has never really changed.

Actually it is two facts but they kind of roll into one!

Whenever you re-render any digital video into another format, resolution, frame rate, bitrate or whatever… you lose quality.

This is of greater importance when you are dealing with MP4 files due to their basic unsuitability for editing.

Kind of crazy I know given that most of us will absolutely be editing with MP4 files!

So rather than go into a rant on that subject let’s just deal with what we’ve got rather than how the world should be.

Whenever you upload to YouTube your videos will be re-rendered regardless of the parameters you use to create the file in the first place.

It’s just what they do!

So in order to minimize the degradation there are some rules you need to follow so that your YouTube videos are looking as good as they can.

As usual take note that even though the video on the subject below used PowerDirector 16 to show the process, it is essentially the same regardless of which video editor you are using.

Given that we are now about knee deep in the quagmire that is 360° video I guess it’s time to start including some tutorials on the subject. (Can you feel my reluctance?)

If you are going to delve into this form of video I think there are some things to keep in mind before you do.

First of these is that this is an emerging technology so don’t be surprised when your consumer level video editor can’t do everything in 360° that it can in regular 2D video.

The second is that even more than for 2D, the key to effective 360° video is in the shooting and not so much the editing.

Both editing software and the cams used to capture the footage will improve over time but at all times keep in mind you are on the bleeding edge of this new technology.

One of the great traps we all encounter when shooting and editing videos is the concept that if we just had this or that piece of equipment our projects would be so much better.

Now I say “trap” because it is a marketing idea that is constantly being drilled into us through every form of modern media.

It’s that idea that the latest gadget will allows us to do something that we could never do before.

My problem with this is that more often than not, that new gadget or new camera or different lens or software upgrade or whatever is usually not the only way to achieve what’s on offer.

In fact most of the time you can do whatever it is with what you have but for the fact that you never tried it.

DaVinci Resolve is gearing up for the release of version 15 with that version having been in beta release for a while now.

Casey Faris is my “go to” guy for all things Resolve these days and in the video below he goes through a few of the new features in the upcoming release.

For those of you unfamiliar with Resolve it started out a while back as a Pro color grading and color correction suite used by many of the big players in the movie industry.

As time passed and as some of the major video editing software makers like Avid, Final Cut Pro and Premiere Pro began to add color grading to their offerings, Resolve realized they would soon be out of the market.

In answer to that they began to develop the program to have editing capabilities as well which they have done very well.

They also began offering a free version which just about anyone can use as an editor but I don’t personally recommend it as it is very complicated and quite restricted in what you can do with it.

This is just a simple walk though of using the forward and reverse controls in PowerDirector to create a fairly commonly seen effect.

Avoid These Mistakes! 5 Filmmaking Tips You Need to Know

These are just some solid and basic tips for anyone shooting videos and although some may be a little advanced they are worth taking a look at.

In particular I think everyone should pay attention to the final one and it is this.

Learn the rules like the Rule of Thirds… then break them.

Video inherits many of its rules from the world of photography because after all, video is just a sequence of still images captured in rapid succession.

like in photography you can create a huge effect by breaking that rule and the best way to work it out is to follow the rule until you can “see” it, then break it to see what happens.

Over on the excellent PowerDirector User to User Forum a couple of the members there have been putting out a monthly newsletter.

The newsletter covers all sort of subjects relating to both the use of PowerDirector as well as the subject of shooting and editing videos in the broader sense.

This week the latest editing dropped and as usual is well worth taking a look at. Click the link below to download the PDF.