So first of all in case you haven’t read page one of this review, we probably need to clarify something when it comes to writing any Pinnacle Studio 25 review.

This is a big program, and by that I don’t mean that it is some ridiculously big download or occupies vast regions of your hard drive.

What I will do is try to cover the main points and then if you feel interested you can go to the Pinnacle site and download the trial.

So let’s start off with the user interface and there is no point pulling any punches here.

Up until the previous version of Pinnacle Studio the user interface was a certifiable mess.

It started off in life messy, became more complicated and from there with the addition of every new feature got even worse.

As of Pinnacle Studio 21 and given the enormous amount of features and controls you need to have access to, this is now one of the most user friendly and intuitive user interfaces on the market. 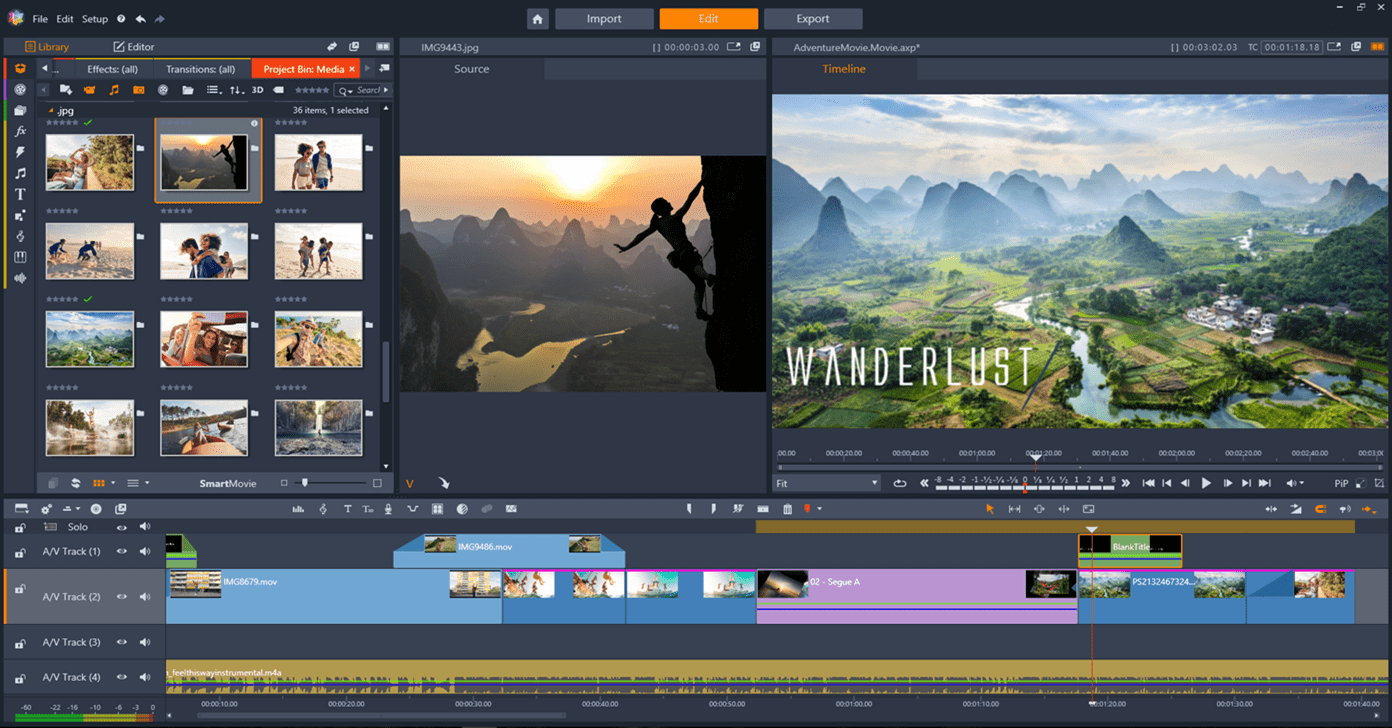 Corel have always openly admitted that getting to use the full power and control of Pinnacle Studio would require that you go through a steep learning curve.

Whilst of course this remains true as it does for any video editing software, the new interface makes it far easier to do so.

The reality is that Pinnacle is just jam packed with features so access to those features has to go somewhere but with this version they have certainly made it a whole lot less painful.

However, if you do invest just a little time into learning it you will be able to exercise a level of control offered by no other software at this price point in the market.

To help with that learning curve the program still ships with a free 21 day access pass to Studio Backlot which has a comprehensive course specifically designed for new Pinnacle Studio users.

Across the top of the screen in the image above you can see that the software separates into three main tabs which cover the general sequence of editing a project.

They are Import, Edit and Export.

As you can see from the image below all available sources of video, audio or image assets are listed across the top of the screen plus the ability to scan for assets as well as set up a stop motion project. 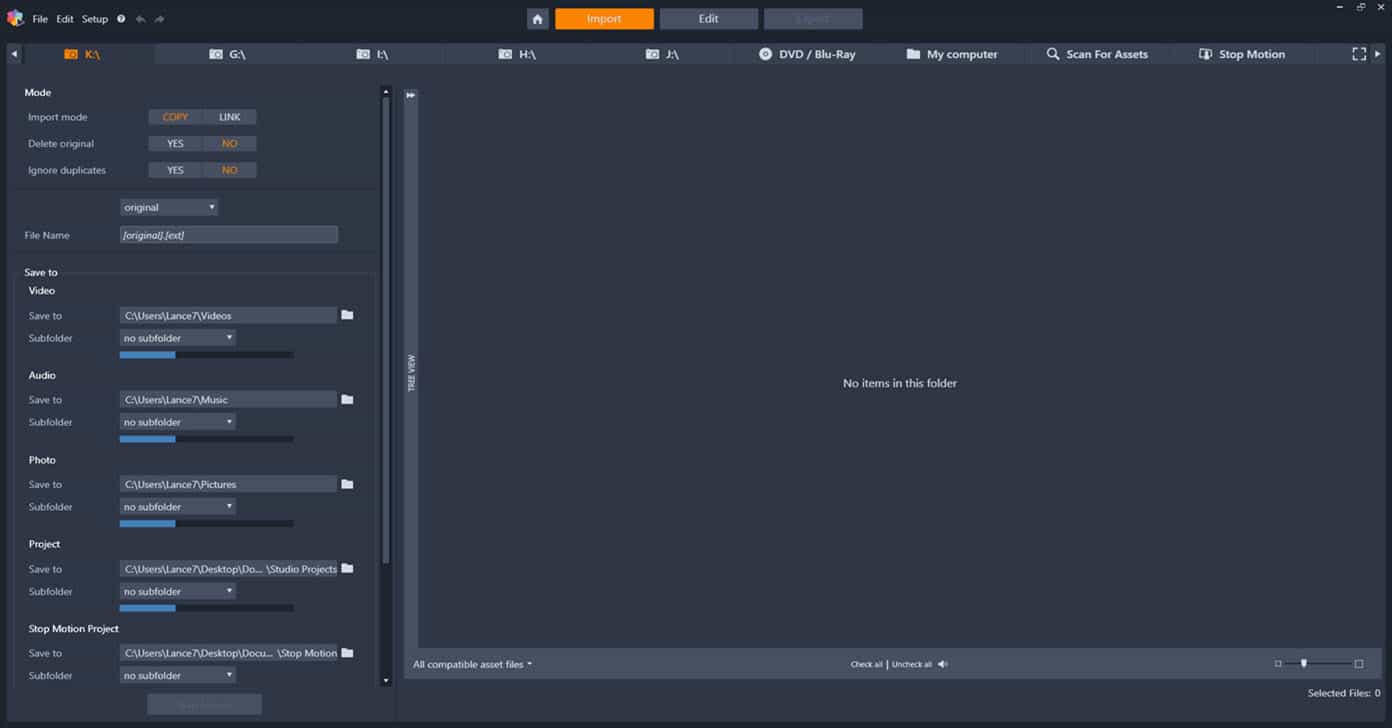 On the left hand side of the screen you can choose whether to import assets into a designated folder or just link to them on your computer.

You can then delete or keep the originals after import, ignore duplicates or not as well as enter a naming protocol for the files as they are brought in.

You can also set default location for each different type of asset whether video, audio or image as well as set up your own folder hierarchy to keep everything organized and accessible.

Under the Edit tab the power of the new interface really starts to come into play.

In the image below you can see the general layout of that work-space. 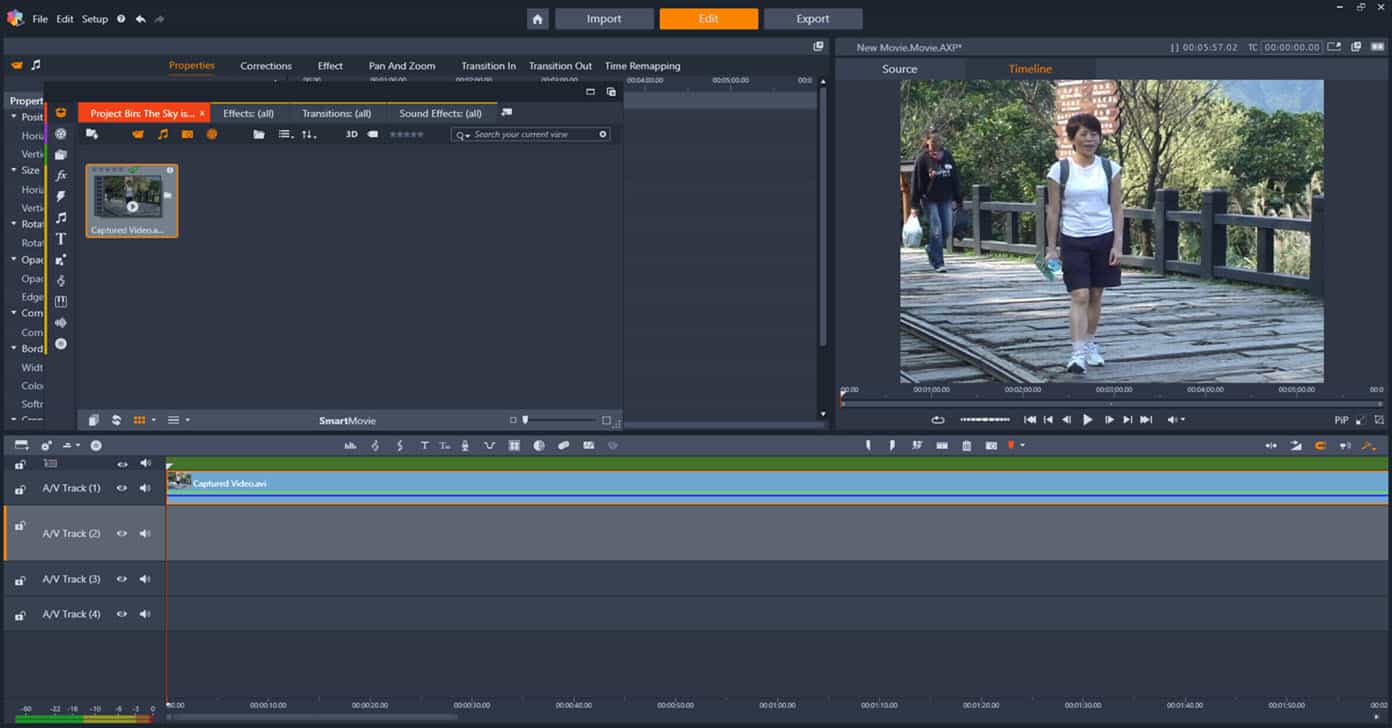 Pinnacle Studio cuts, slices and dices as you would expect any editor to do and it does it with ease.

You have frame accurate editing, key frame capability for any effects or changes, over 2100 (Yup! 2100) different types of filters, effects, transitions and audio effects at your disposal.

All of the above come in a preset form but the vast majority can then be manually adjusted and fine tuned to suit your needs once dragged onto the timeline or clip in question.

Included in the Ultimate version are a full range of effects from NewBlue consisting of their Video Essentials II, III, IV, V, VI, VII, Film Effects, their excellent Stabilizer module and the Paint Effect.

The video below highlights the new selective color  feature.

There is a motion tracking module which comes in two forms to suit different tasks, end to end 360° editing, multicam editing, unlimited tracks and compatibility with all common file types including the professional ones like DVCPRO HD, XAVCS and all up to 4K resolution.

The suite also has stop motion capability, a bunch of automatic correction tools for adjusting color, red-eye and a host of other common errors most often found in footage.

It has a music generation module that fits a background music track to suit the length and mood of your project or you can simply add your own music or voice track.

There is a complete titling module and you have full control over titles or overlays offering the ability to not only fade in and out as you want but to easily adjust the opacity of the overlay on a key frame basis.

Pinnacle also handles green screen sequences at a very sophisticated level and because of its superior control, can be very forgiving of chroma-key sequences that were not shot particularly well.

Not only does it execute green screen perfectly you can also add further effects and touches to your project as well.

The program also offers an audio ducking feature that can automatically adjust background music volume up or down depending on the presence of a narration or voice track.

The module itself can be adjusted as to how far the volume is adjusted and how sensitive it is to other sounds present in other tracks.

The multi-cam editor is particularly useful these days with most of having access to footage of events from more than one source.

It can analyze these sources a few different ways to attempt syncing them all together or you can do it manually.

Once synced, the footage can be edited in the same way a live T.V. production occurs by simply “switching” between cameras to get what you want.

On top of that with the release of Pinnacle Studio 25 this has been further enhance by the addition of multicam or multi-source capture.

This means you can simultaneously capture footage from more than one device at a time then add it to the editor.

To be honest I can’t think of anything that isn’t covered here!.

The Export tab opens up a fully loaded production module in which you can output your projects to all common and some exotic video formats.

Pinnacle Studio 25 also connects to YouTube, FaceBook, Flickr and Vimeo from inside the program so you can directly upload to these services from within the interface.

There are plenty of preset options you can use for output and uploading which are based on each service’s “best practices” at the moment or if you like you can step in and control the entire process yourself.

Regardless of your file rendering choice you can use a whole bunch of preset parameters for your projects or take full control and set codecs, bitrates, frame rates and resolution to exactly how you want it.

The Disc Burning function has been removed from the Export tab to make things less cluttered and it can now be accessed by simply clicking a button in the Edit Tab which takes you immediately to the rendering module to create the final file to be used.

Once that file is created the MyDVD module opens and you are ready to begin designing your DVD or Blu-ray disc menus, chapters etc.

It comes with about 100 preset templates all of which can be adjusted to suit every aspect of the disc authoring process.

You have complete control over menus, sub-menus, chapter points and the entire burning process allowing you to create plains discs or multimedia extravaganzas.

On top of the main editor the product also ships with a fully integrated screen recording module which can either be launched from within the program or as separate software.

Once you have finished the screen recording you can simply save to a video file for editing later or have that file saved and loaded immediately into Pinnacle Studio 25 for editing.

In reviewing Pinnacle Studio 25 there a few main points to consider if you think this may be suited to your editing needs.

The program comes at three levels and you can compare them HERE but!

Unless you are going to be using the full array of features only offered at the Pinnacle Studio 25 Ultimate level then going for the other lower levels seems pointless to me.

It would be like buying a V8 supercar and then swapping the engine out for a compact four cylinder!

On the downside there is still a bit of a learning curve to go through in terms of the user interface even though in this version it has been improved out of sight.

The sheer power and range of features means that there is a whole lot of stuff to get through!

On the upside, anyone willing to go through that learning curve will be richly rewarded.

The software has a very active and engaged user to user forum for anyone needing help and Corel themselves are also actively engaged in the development and support of the product.

All in all if you are looking for a video editing beast that offers an end to end solution you would be well served by Pinnacle Studio 25 Ultimate.