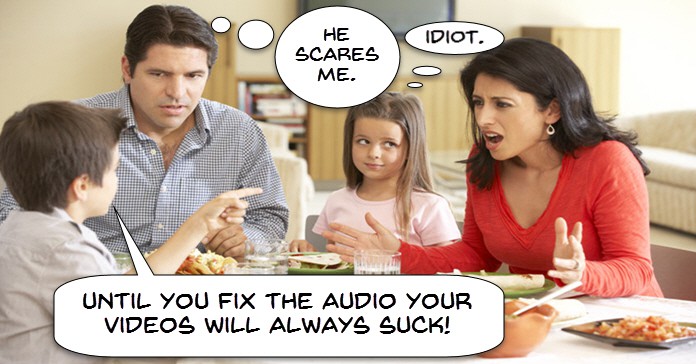 Sounds OK to Me!

Like most things these days audio for video is a subject that is covered extensively all over the place on the internet.

The information is all over the place.

This wild confusion of information and “stuff” we call the internet certainly has everything we need to know, it’s the finding it part that’s really hard.

So, this week I was pleased to come across a full page resource on the subject of recording good audio over on the Techsmith blog.

As many a newbie has discovered the hard way, you just can’t underestimate the importance of audi in any of your video projects no matter the style or purpose.

Techsmith are the makers of Camtasia for screen recording but even if you are not a Camtasia reader their blog often has very informative and very well put together tutorials on a range of video editing and shooting subjects.

One of the most difficult tasks faced by video editing software designers at the moment is finding a balance between presenting a clean and understandable user interface while at the same time providing access to the myriad features the software offers.

The result of this is a modern design philosophy of not overwhelming the user (especially the new one) with an interface that looks like the control panel of the space shuttle!

Interfaces that look like that are more than enough to scare any potential user away!

So the trick these days is that everything is hidden away from sight and it is only when you go digging that you really begin to understand just how sophisticated this software has become at the consumer level.

I have included the video below for two reasons.

The first being that it gives a great overview and run through of what you can do with the PiP designer in PowerDirector and how to do it.

Bear in mind that something similar exists in just about every fully loaded consumer level video editor although it will look a little different.

The second reason I included it was to provide an excellent example of how the real power of the modern video editor is actually tucked away inside modules you need to click on to access.

If you follow the video you see it starts with just a few assets on the timeline then by clicking on one button it is almost as if an entirely new world of features and choices opens up in an instant.

Easily one of the best ways to add a little zing to your projects is to add some animated fonts to any regular or explanatory titles you are adding to a project.

Most video editors come with quite extensive tools for both adding and custom animating fonts for you projects.

The only real hassle is that you have to learn how to do it in the first place and then spend the time fiddling about getting the font to do what you want.

An even worse case scenario is that you have absolutely no design skills or ideas!

In this case I find that the best thing to do is to steal someone else’s animated font. Easy!

OK, maybe it’s best not to actually steal stuff and in fact you don’t really have to.

Just do a search on Google or your search engine of choice for “free animated fonts” and you will get a gazillion (yes! That’s a number!) results offering free fonts for your editing pleasure.

Both static and animated fonts come in a standardized form so you can usually import them directly into your video editing software of choice and edit away.

Here’s a page with a list of a few to get you started:

So we all pretty well know the term Autocue and what it means.

Just in case some of you don’t it’s that system of playing text in front of an onscreen speaker so that he or she can read it to the camera and look totally natural while doing it.

At its professional level the text is displayed on a transparent screen that sits in front of the camera so the speaker looks like they are looking directly at the audience and not to one side reading.

Interestingly even though we all use the term autocue to describe this, autocue is actually a brand name and the name of the company that first developed the system.

There are lots of tutorials on YouTube for how to set up your own autocue system to use in your video projects but you still need software to enter and then scroll back the text you want to read.

This week Autocue announced that their basic level software system would be made free to download for anyone using a Windows operating system.

It also requires a setup with a camera and a means by which to present the text on a screen at the right eye level and direction to give that “naturally speaking to the audience” feel.

I came across this interesting site this week offering tailor made music tracks for video projects.

Most of the better video editing software programs come with at the very least a library of music tracks to can choose from to add to your projects and that in itself is fine.

Some others like Corel VideoStudio and CyberLink PowerDirector offer integration with SmartSound Quicktracks on top of the basic stock tracks although the Corel product allows you access to a lot more tracks than PowerDirector.

For those of you who are unfamiliar with it, SmartSound is a library of generic music tracks covering an incredibly wide range of styles and moods for music to add to projects.

What sets it apart is that the music itself is not just a straight music track.

The music sits “in” the software addon so you can select the track, make a number of adjustments to how it should play and then also tell the software where you want it to start and finish.

This doesn’t mean it just cuts the music when the required amount of time has passed, it actually “winds up” the track so that the music sounds as though it was written to end at the point.

So, back to the original subject of the site I found!

Its called Jukedeck and is an online interface that offers to create various types of background music depending on your choice of style and a preselected duration.

You can use the service for free as long as you give them some kind of credit in your project or you can pay them $0.99c for each track.