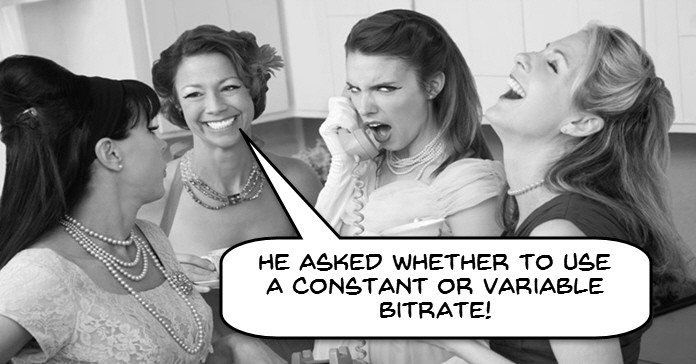 What Bitrates Should I be Using?

One of the never ending subjects that come up in the course of creating any video projects is that of the parameters at which one is supposed to be outputting their video files.

If you look at the current recommended settings at which a video should be uploaded to YouTube and compare it to a few years back you begin to get an idea.

Whilst most video editing software comes with a decent set of pre-set parameters to cover most situations, that really doesn’t beat having a good understanding of some of the settings and what they mean.

A good one to start off with is the question of bit rates.

Bitrate simply describes how many bits (pieces of digital information) is being used to display one second of video.

So this presents the first decision point, how to get the best quality at a file size that suits the distribution method.

It is generally on this point of bitrates including whether you need a variable or constant bitrate that the real fun begins.

This especially applies to producing DVDs where a user buys a commercial DVD with a full length movie on it, complicated menu system, a bunch of alternate language tracks, a blooper reel and a “how the movie was made” feature and can’t understand why they can’t fit the kids party onto one disc!

Check out the article below for an introduction to the subject of bitrates.

I find the guys at Film Riot to be annoying.

However they also happen to create some pretty informative content on the subject of making videos even if it does lean a little towards more commercial applications.

The video below covers the subject of light and doesn’t go into it from a what you need point of view.

This is just a good grounding in how you can use available light with minimal equipment to create better images in your video projects.

Oftentimes you may find yourself working with an audio track which for some reason has only been recorded in mono.

Even though when videos are recorded using normal devices, they are in stereo it is not really “true” stereo sound.

It is simply the same sound recorded to two tracks.

Stereo sound has been recorded in such a way that it to some degree recreates the way you would hear normally with different sounds assigned to the left and right channels.

So even though your audio may have a left and right channel it is still not real stereo.

Having said that, mono sound recorded to two channels is still a step up from mono just coming out of one set of speakers!

So, if you do have a mono track there is a very simple way you can clone whatever channel you have across to the other (empty) channel to at least give you a balanced sound.

Check the video below for a step through of the process but remember that even though it is being done in the simple audio editor that comes with CyberLink PowerDirector, the exact same steps can be done with any rudimentary audio editing software.

Update from Magix on Their Sony Creative Purchases

A few weeks back I reported on the joint announcement from Magix and Sony Creative that Magix had acquired the majority of the Sony Creative product line including all iterations of Sony Vegas and Sony Movie Studio.

The deal included most of the other software Sony had been developing as well.

As can be imagined this to some degree set the cat amongst the pigeons in the Vegas, Movie Studio universe with all sorts of “end of the world as we know it” predictions.

The reality has turned out to be far more mundane as I would have thought.

Sheer commonsense would tell you Magix are not going to buy an entire product line then promptly alienate the user base of those products!

So in answer to many of the common questions that have arisen here is link to an FAQ put out by Magix laying out the timeline for changeover and what existing users can expect to happen.

How’s This for a Busy Timeline!

One of the questions that seem to come up when someone relatively new starts looking for video editing software is, “How many editing tracks does the software have?”

Now on the surface this seems to be a fairly sensible thing to ask up to a point but when you consider that most of the top contenders have up to 99 tracks available you then have to look at why you would need that number.

The reality at the consumer level of video editing is that realistically you probably need a track for video and another for overlays or picture-in-picture stuff and maybe one more for something I haven’t thought of yet.

Another for images, one more for music backgrounds and another for any voice over’s you want to record and add.

So far we are up to five so let’s just double that for fun and safety to get a total of ten.

Without checking every software recommendation on this site I think that puts us still well under the one with the least number of tracks available.

So if you are trying to work out which video editing software you need there is one clear point that you can pretty much ignore: The number of editing tracks the software offers!

You can shut your eyes and play pin the tail on the software and on this point still come up smelling like roses.

This brings me to the more operational aspect of having that almost limitless number of tracks available.

The average full budget Hollywood movie type production is going have a bewildering number of tracks being used at any point in the movie’s editing process.

But you see that’s the domain of the professional editor, the guy that really knows what he is doing in order to produce the kind of thing you go to the movies to see.

The key here is to keep it simple!

So you can get an idea of just how intricate the editing in a Hollywood timeline gets take a look at the link below. Once there click on the image and then click again to see it full screen. That’s a seriously busy timeline!