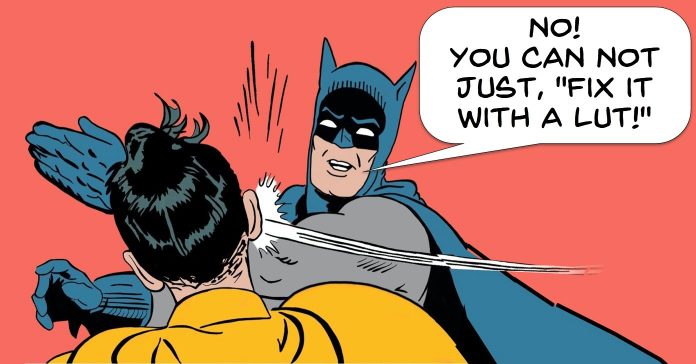 A few weeks back now on April Fool’s Day Casey Faris put out an incredible video purporting to announce the release of his amazing automatic super LUT called Pegasus.

According to the video it could instantly create the perfect look for any footage by automatically correcting everything in it and making it perfect.

Now a lot of people got themselves all excited over the possibility of such a thing and lost track of the fact that it was April Fool’s Day!

Anyway as the video went on and on the claims they were making about what the LUT could do were getting more and more outrageous until at one point they stated that the LUT could even add tracking motion to an otherwise still video shot!

Finally at the end they confessed that there was no such LUT but you had to admire the quality of the joke.

You can check out the video itself HERE.

So cut to this week where Casey has uploaded another video as a bit of an answer to that last one and in it covers some great information on LUTs.

Amidst all the hype you see about LUTs and what they do it is quite understandable that people may get the idea that they are in fact magic just like Casey’s fictional Pegasus LUT!

The reality is that yes, they can be very useful and no, they don’t automatically make things perfect.

To get a better and more balanced view on LUTs and how to use them check the video below.

How Sony’s Auto Focus has Evolved

Many years ago when the major camera manufacturers started getting into video for the home user market the development race began.

Up until the time of standard definition’s demise the two front runners were Panasonic and Sony.

Panasonic probably led the field in picture quality due to their 3CCD setups but the clear winner on two fronts was Sony.

They had far superior LCD display technology especially when using their camcorders in bright sunlight but their real ace in the hole was auto-focus.

Bearing in mind that this was the home point and shoot market their auto-focus capabilities became a huge advantage.

With the introduction of high definition that auto-focus became even more important due to high definition being totally unforgiving of anything even slightly out of focus.

As time has rolled by the edge Sony had with their LCD displays has waned but they are still noted for having one of the best auto-focus features around.

Check out the video below to get an idea of just how that feature has continued to evolve.

Also keep in mind that if you are looking around for a new video camera and you are going to be pointing and shooting most of the time, auto-focus is a key feature to look at.

How to Add Camera Shake to Your Videos

In these high definition days probably the greatest enemy that we have to shooting footage effectively is that of camera shake.

The downside of high def is that unlike standard definition, every little detail is captured in a super accurate way and this unfortunately extends to camera movement.

On the other hand there are times when you may actually want to add camera shake to your footage as an effect.

The absolute worst way to do that is by actually shaking the camera!

Using that method offers no control whatsoever and the results you get may be nothing like you imagined.

The best way to achieve the effect is by using a filter in your video editing software and just about all decent brands of software these days come with a couple of different and adjustable camera shake options.

To get a quick overview of using these filters check out the video below.

As usual, even though this tutorial is done using Filmora, the process is exactly the same regardless of software brand.

Each year one of the biggest events in the world of video is the NAB Show in Las Vegas.

It is at this event that you tend to see not just the latest and greatest but also small tastes of perhaps what is to come in the future.

One such item of interest that came up this year was the announcement regarding the release of the ProRes RAW file type.

Now if you are a professional video person this would be of great interest.

If you are not a pro it would be easy to walk right by this one without giving it a second thought!

Just bear in mind hat whatever is happening at the pointy end of research and development will eventually make it down to the consumer level.

The video below is a pretty simple and straightforward introduction to the PiP Designer in PowerDirector 16 and shows how to use that module to rotate objects.

Although it is not really rocket surgery in itself as far as creating effects goes, it does offer a good introduction to the PiP Designer and the kind of things you can do within it.

PowerDirector has a lot of powerful yet hidden features like this so it’s good to take a little tour around it every now and then.

Sometime I am still surprised by what I find! PowerDirector Review Here.

This is a simple run through of the features and settings within one of the paid upgrades to NewBlue FX.

Many of the major video editing software programs these days come with at least a couple of NewBlue FX modules loaded for free but obviously NewBlue don’t survive on giving away freebies!

All of their effects and filters packages come in a “pro” form of some description adding huge functionality to even the most modest of editing suites.

You can check them out on their site HERE but in the meantime the video gives a good example of the kind of control you get with these types of plugins.