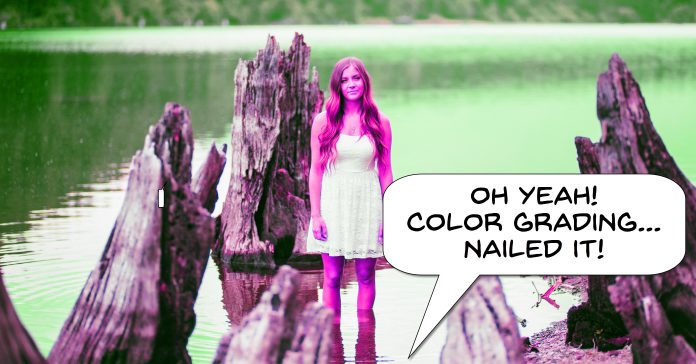 Probably nothing new here as far as smart phone video tricks go but really, most of it bears repeating.

One of my pet hates when it comes to footage captured on the fly by amateurs is the application of the “watering the garden” technique for shooting.

You know, it’s the one where you think you must take the video but at the same time are trying to watch the action as well so the result is footage that is waving around all over the place.

In light of that there are two rules I always apply.

1. If I am going to video it then I must forgo watching it at the same time. I am no longer an observer of the events, I am a recorder of the event.

2. Hold the phone with two hands and tuck your elbows in to your sides.

This makes for much steadier shots.

If you happen to be using PowerDirector with the ColorDirector module, or Pinnacle, Vegas or a number of other editing software products like them you may have access to color grading.

This is different from color correction and is designed to give you total control over the overall “look” of your projects.

Most people that have access to these modules tend not to use them very much because let’s face it, they are pretty daunting to look at from the start.

On top of that even if they get a bit of a handle on the interface the next question is, “What the hell am I trying to do anyway?”

So rather than sink yourself into a sea of knobs, sliders and buttons that you have no idea what to do with, try this.

Check out the video below to watch someone color grading in real time.

Don’t concern yourself with the software he is using or how he is doing any particular thing.

Just watch and understand the decisions he is making and why he is attempting to change certain things.

Just get a feel for the reasons why rather than the technicalities of how.

How to Match Colors Between Shots

This is another video demonstration on color grading, this time on how to match the look of one project to another.

This is good one if you are trying to match your project to a look that you have seen or at least have access to a few shots from.

In fact you could even go so far as to match your project to a still image in some cases if that image has a color grade you particularly like.

I wanted to add this article into the Friday Roundup because I think it perfectly illustrates the magic of video.

One of the most important lesson I think there is for the amateur video maker is the realization that you are not necessarily recording the facts or the reality of any given subject.

What you are recording are the elements you will need to later reconstruct the event or subject in a way that conveys what happened.

That means things like shots of the day don’t actually have to be shot on the day!

Reactions to events could be recorded hours, days or even weeks later.

It is through the magic of editing that you can then piece it all together.

In the same way objects and scenes can be totally faked and in fact sometimes the faked shot serves far better than the real one because of the control you can exercise over it.

You think all that food you see on cooking shows is as delicious as it looks?

Well carrying on with what seems to be rather a popular topic at the moment yet another great video tutorial on the subject of transitions.

For those of you who have not yet come across one of my epic anti-transition rants let me lay it all out for you!

A transition is an action (not a thing in your effects library) which occurs in editing when you are moving from shot to shot or scene to scene.

The clue here is in the name.

It serves the purpose of transitioning the viewer seamlessly and unnoticed from shot to shot so as to maintain the engagement of that viewer.

Unfortunately the word transition is also used to describe generally a very large set of pre-made effects that come with most consumer level video editors.

You just drag one into position between two clips on the timeline and hey presto, Hollywood magic!

Now you will notice I said consumer level video editors have them.

In the case of pro level editors there are very few if any at all and the reason for this is that a pro wouldn’t be caught dead using a transition out of the box!

They know and you should know too, there is nothing that will make an amateur video look more amateur than a cheesy transition that came with the software.

How To Get More Views and Watch Time with Optimized Playlists

Two of the most important metrics when it comes to success on YouTube are watch time and time spent on the site itself.

If a user arrives on YouTube and watches one of your videos, the amount of time they spend on that video is how they calculate watch time.

A long or longer watch time indicates to the YouTube algorithm that your content has value in relation to the reason the person arrived at your video in the first place.

So for example if someone searched on YouTube or Google for the term “dog training” and they clicked on your dog training video you have scored a little point.

If they then stay to watch most or all of the video then you score extra big points because the user appeared to be pleased with your video.

The other metric they are also tracking is the user’s actual time in total on YouTube and if you can get this right you get huge extra bonus points!

Remember, the longer the person is on YouTube, the greater the chances are that they will click on an Ad or take some action that generates revenue for YouTube.

If your video is loaded on to your channel and is basically standing alone by itself then while the video is playing, YouTube will be displaying other related videos in an attempt to get the user to stay.

Those videos they display may come from anywhere else on YouTube and if the user clicks on one of those, you have essentially lost that user.

The metrics recorded then move over to whoever made that other video.

In other words, trap them in your little universe!

So how do you do that? Playlists.

If your video is part of a playlist on your channel then while that first video is playing YouTube will only display other videos from your playlist which (should be) yours as well.

This also applies to the “Play next” choices that are displayed when a video finishes.

By intelligently arranging your videos into playlists you can maximize your chances of holding the viewer and in the eyes of YouTube scoring full brownie points.

This is another tutorial for DaVinci Resolve 14 from Casey Faris this time covering all aspects of slowing down footage while editing in Resolve.

He pretty much covers the whole thing but there is one point to keep in mind for all slow motion effects regardless of what software you are using.

You will notice he uses footage shot at 120 frames per second for the actual demonstration and doesn’t really say why.

So here’s the deal.

If you are going to use footage for slow motion then each time you slow that footage down you will get degradation in the quality of the image.

The trick here is that for slow motion footage to remain clear an crisp it has to be shot at very high frame rates which is why action cams like the GoPro promote super high frame rates.

That’s the only way you can take high definition footage, slow it way down and still get that HD quality.

While I am on the subject of Resolve it is worth noting that the video below is playingt from a playlist on YouTube that I created.

That playlist has a whole bunch of DaVinci Resolve tutorials from different sources pulled together in one place.

Many of you shooting with consumer level cams and camcorders have probably run into the awkwardness of trying to smoothly zoom.

The results usually look like a bad sixties movie trying to replicate an LSD trip!

One of these little thingies might just be the ticket.