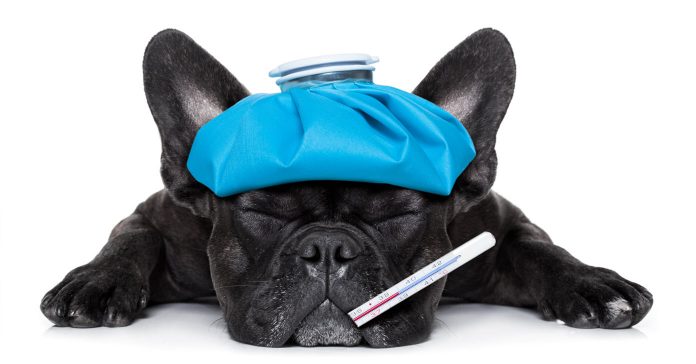 So by way of explanation what you would normally expect to see as the lead image in the Roundup would generally be an image doctored by me to make a lame joke about video in some way.

Unfortunately this week I have manflu and as all men out there know, I am not long for this world, so sad really.

Anyway the best I could do was a image of a sick dog.

I will try to improve on this next week provided I survive… it’s a waiting game.

Advice on Using Drones for Video

However there is one rule that seems more and more applicable as time goes by and that rule is: “Just because you can does not automatically mean you should!”

Which brings me to the subject of the video below. Drones.

Currently they are all the rage and everyone who has even the slightest vestige of their inner child still intact wants to get one and use it because they are cool!

Unfortunately that aforementioned rule still applies and just because you have a drone does not automatically mean you should shoot with one!

Yeah, I know, I am a total killjoy.

Cheesy family shots, cheesy panning when it is not necessary and even cheesy drone shots all have one thing in common… they are cheesy and will make your video look cheesy.

The recent trend of users shooting, editing and uploading videos to services like Instagram has had one interesting side effect.

It has forced people to get a little more creative when it comes to transitions and in my opinion that’s a very, very good thing.

All desktop video editing software usually comes with just a mountain of cheesy pre-configured transitions that are oh so easy to fall back on when you are making your editing choices.

On the other hand smart phone apps just don’t have the space or processing power to have them in any great number.

This means that you either have to shoot then edit later (not so good for the instant gratification generation) or you have to get creative.

The video below shows you 7 transitions you can create in camera and how to do them.

If you want to really nail it, shooting transition sequences then edit in software later to really give them some polish.

It is that time of year over at Magix at the moment where they are releasing updated marketing and tutorial resources for their products.

Because they have dropped the “version number” model their software updates constantly as those updates become available so as such they no longer have a big release date every year.

Last week they added new resources for Magix Movie Editor Pro and this week they have covered Video Pro X.

If you are unfamiliar with Video Pro X it is their professional level software and you can read my review of it HERE. In the meantime here is a run through of the program and its features.

In keeping with the updates theme coming out of Magix this week and last they have also announced the release of Vegas Pro 16 and with it a bunch of new tutorial videos.

If you are thinking of taking your editing up into the pro level Vegas Pro more than ever represents a pretty solid move in that direction.

You can check it out on their website HERE.

Quite a few years back with the release of the RED cameras all the talk of the future was about 4K video.

As is the case with most things like that 4K took on a life of its own and was touted more and more as to be the ONLY way forward.

So here we are nearly ten years later and some of the “it MUST be 4K” buzz seems to have died down. Why?

Put simply it is because the success or failure of a video or video project will never really hinge on one parameter (resolution) of the video file being used to create it.

There is so much more to the equation.

Don’t be Afraid to use Reference Material

The difference between an amateur production and a professional one outside the obvious things like production values comes down to one key element.

The existence and telling of a story.

This is such a key point yet is very difficult to convey.

Most amateur home movies are too long and are painfully boring because they rely almost totally on the audience having a personal connection with the subjects of the video.

For anyone not personally connected there is just nothing there.

An amateur effort at shooting and editing a wedding will look OK to anyone connected in some way to that wedding or the people at the wedding.

What you will most likely be looking at is a recording of the day’s events somewhat in sequence.

A professional will not be doing that.

A pro will be telling the story of the day so that the final product can actually be viewed by anyone and enjoyed.

The video below goes into just how much detail even a low budget production will go into so that they can tell the story.

PowerDirector – Move a Text Object Like Paper Blowing in the Wind

This is a straightforward tutorial video on manipulating text in PowerDirector.

The point of the tutorial is to make the text appear as if it is a piece of paper being blown along in the wind.

Whilst in itself it is a perfectly good tutorial I think it has added benefit in that it shows how you can get things done in modern video editing software.

The reality is that if you were to attempt this effect by treating the text in question as a title then you would not get it done.

However if you, like the creator of this video, can think just that little bit outside the box, it is possible.

All that has happened in this video is that once the user discovered he could not get a title to behave like that he immediately switched to creating the title as an image object an then manipulating that object to get the desired effect.

OK so I am guessing that I don’t have to do much of an introduction into this special effects walk-through.

It’s the whole “Beam me up Scotty” sparkly transporter effect which you and I can do in a couple of minutes in any modern video editing software.

I was contacted this week by a small independent music maker asking to highlight his website.

So here it is!

If you are looking for some royalty free music you may want to check this site out.

Many of the tracks are actually free if you are not wanting super high quality files and he has a rather quirky selection of stuff on offer so take a look!

How to Use a Gimbal to Capture Great Footage

One of the biggest difficulties associated with shooting videos at the consumer level has always been trying to get smooth footage.

The idea of trying to move to any great degree has always been slightly off limits because of the inevitable camera shake you were going to get.

This situation became even worse with the introduction of high definition footage which has the tendency to not only reveal every little shake and bump but to actually exaggerate it!

Various stabilizing devices have been developed to counter this with varying degrees of success and accessibility until today where we are spoiled with choices.

The king of the heap at the moment is the gimbal and the variety of styles and price-points seems to go on forever.

You can start at $30 and just keep going up from there!

Easily the best ones are the motorized gimbals and as it is with most things, ya gets what ya pays for!

Anyway, if you are looking to start using gimbals take a look at the video below for some great tips on how to use them effectively.

I don’t generally refer too much on this site to the equipment side of things when it comes to shooting video.

In fact I don’t very often refer to cameras as well!

The reason for that is I just can’t keep up with the development all by myself and I certainly don’t have the resources to offer any meaningful assessment for any of it.

I do think however there are some basic pieces of kit you should have and one of those (if your camera takes it) is a polarizing lens filter.

At the most basic level that kind of filter will give you the difference between pale blue skies rather than the deep blue you saw on the day or getting a kind of sick green looking ocean when in fact it too was a deep blue!

There are other situations where a polarizing filter can be used and save yourself a bunch of time not having to correct your images in software.

The video below is actually aimed at the photography crowd but the effects being demonstrated apply equally to video shooting.

How to Color Grade without LUTs

The video below is long and in places a tad technical BUT!

It is well worth checking out if you ever want to get good at color correction and color grading.

The reason for this is that it is a walk-through using only the color correction tools available in most video editing software and does not fall back to the use of LUTs as a shortcut.

There are a few other things to take note of here before you dive in.

The software being used in the tutorial is HitFilm Pro which is a $300 per year subscription type program.

Because of that for many of you the interface will seem a bit foreign and that’s because it is!

Don’t get stuck on that point in any way.

Simply watch what Aidan is doing, take note of the module he is using, remember why he is doing it or why he is trying to achieve it then look for the equivalent feature or module in your own software.

I have gone though the whole video and there are a few tools he uses within HitFilm Pro that my software doesn’t have.

For those I just skipped along anyway and didn’t bother.

There are some great tips in here especially from the perspective of why you want to do certain things or make things look a certain way in your projects.