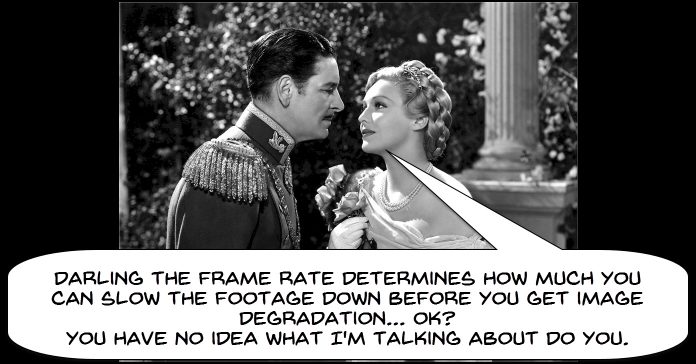 One of the things in video editing that a lot of people have trouble wrapping their heads around is applying slow motion effects to a clip.

Usually the directions on the box simply state that all you have to do is load the clip, apply the slow motion effect any way you want and hey presto, slow motion magic.

As it is with most things in life, it’s not quite that simple!

Yes of course you can do that but there are restrictions on just how slow you can go before you begin to notice considerable degradation of the image.

That’s the whole reason why action cams like the GoPro can record at what seem to be ridiculously high frame rates like 120 frames per second.

There is absolutely no need to record at anywhere near that rate for normal playback but if you want to be able to slow that footage right down to a crawl and maintain resolution that’s what you need.

Most video editing software has some kind of slow motion effect built in but in order to understand just how far you can push it you need to understand project frame rates as well as the recorded frame rates.

Check out the video for a great explanation of how it is done.

This one is for Pinnacle Studio but the same settings and the same concepts apply no matter what you are using.

A Little More on Frame Rates

There is another reference to an article somewhere in this week’s post on the technicalities of using slow motion in your videos and the degree to which you can do that.

Using normally shot footage in slow motion has an inherent problem in that there is only so far you can go with slowing things down before you begin to suffer image degradation.

So as a little addition to that entry here is a pretty solid reference from Techsmith on video frame rates, what they are, how we got them and what they can be used for.

Some Specifics for GoPro Footage

Someone stopped by and commented on one of my posts this week and casually mentioned how they had been using a particular resource to work with GoPro footage.

Turned out it was actually on the Corel site and referred specifically to dealing with GoPro footage using Corel VideoStudio.

So I took a look at the the series and holy moley!

It is actually what it says on the box!

In looking through it, it really is an awesome resource if you happen to be using a GoPro and covers all sorts of technical tips, tricks and explanations that make using this slightly different footage and file type sometimes problematic.

Although they obviously want you to use their software (which is pretty good anyway) it is not strictly for VideoStudio users and well worth taking a look at.

This is a pretty cool video made by a smart young video maker who is well worth following.

He covers some of the more modern video shooting and editing techniques we are seeing in films today and covers a little on the how’s and why’s of it all.

Psychology of CINEMATOGRAPHY In 60 Seconds

Lurking about somewhere on this site is a series of articles I wrote on the subject of Shooting Better Videos.

One of the key points I make in that series is that the absolute first rule of shooting video is the fact that you are shooting video!

Now I know that seems kind of obvious but stick with me cos’ I am going somewhere with this.

If you take a look at most of the video that makes its way onto YouTube the most glaring mistake you will see is that the person shooting the video fails to actually shoot what they intended to shoot.

In other words they fail consistently to keep whatever the subject is at least somewhere in the frame.

More often than not they are “firehosing” around all over the shop so you either have no idea what they are trying to show you or you get “bits” of it but not a clear picture of what’s happening.

So if mom or dad are shooting video of the kids party, from the moment they start shooting they MUST consider they are not at the party anymore.

They are recording the party so that someone else can see what happened.

Every shot you take no matter how basic or simple your video is, will take your audience somewhere.

Beyond that there are some specific things that will cause specific reactions in your audience and these are well worth knowing.

Phone on a gimbal? Mobile filmmaking

I think it has become pretty clear over the past few years that the days of needing some exorbitant priced high end camera to shoot quality high definition video are over.

I think it was about two years ago that one of the prize winners at the Sundance Film festival was entirely shot on an iPhone!

Up until recently one of the restrictions holding mobile footage back was the inability to be able to control the camera settings especially when it came to bitrate.

This resulted in the high definition footage always being at the bottom end of the scale.

However these days there are many app you can use to take control of that and many other aspects of the camera phone as well. Just to give an idea of how fast this area is advancing check out the video below.

The site focusses on a very specific aspect of video creation with regards to the creation and use of motion graphics.

Most people operating at the hobbyist or advanced amateur level would probably have had more than their fair share of experiments into the world of graphics within the constraints of the average video editing software.

As is often the case when using software it is easy to go down the path of thinking that it is the limitation of the software that is restricting the quality of the output.

In my experience that is hardly ever the case.

The two main reasons people fail to get the results they want from whatever software they are using for video editing are; a lack of knowledge on HOW to use the software and WHY you are doing what you are doing.

Of the two the most basic is the WHY of doing what you are doing.

Every cut, every transition, every filter you apply and in fact every step of your editing process has to have a reason for existing.

Transitions just dumped into the middle of some footage because the shot was going on too long is not a good reason to add one!

The same goes for everything you are doing but the problem is that very often we do stuff without really knowing WHY we are doing it!

So, back to the website I found and the subject it covers as I mentioned was motion graphics.

It gives some great insights into the WHY of motion graphics and how they can further enhance the experience of the viewer. Well worth checking out.