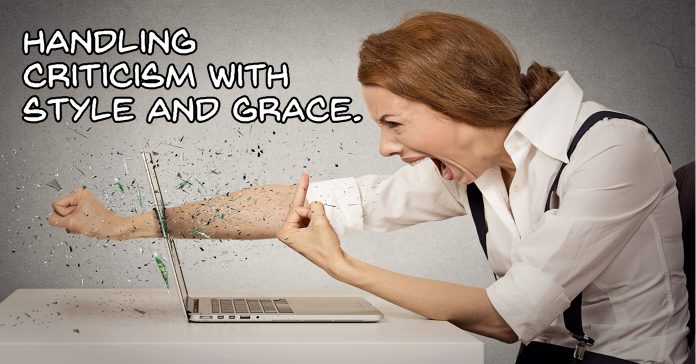 One of the unavoidable side effects of creating video projects and having other people view them is that you open yourself to criticism.

How you handle that criticism is an important point to consider as you move forward because the reality is, if you don’t handle it well, you won’t move forward!

In fact if you handle it poorly you may eventually stop.

So when you do receive criticism it is important to evaluate that criticism before you act on it or not.

There are basically two types of criticism, constructive and destructive.

There should be clear delineation between what is presented as fact and what is offered as opinion and should contain no personal disparagement towards the creator whatsoever.

It really is as simple as that and from that you can probably gather that the vast majority of criticism offered on the internet should be wholesale ignored!

The other point to keep in mind is that of who is making the criticism.

If aunt Bessie says she doesn’t like your video that’s fine.

She is entitled to an opinion and her opinion has value in that she may be representative of your potential audience BUT!

It is NOT a fact, it is just an opinion.

If you are offered constructive criticism by someone who knows what they are talking about then sure, take it on-board and try to get better.

Always keep in mind that we live in a world of social media where it is easier for small people to take potshots at those who create because they lack the courage to create themselves.

And remember, never feed the trolls.

Audio ducking has become a pretty stock feature in most editing software these days and if you already own some software there is a good possibility you have it.

So what is it?

Audio ducking is the action of reducing the volume of one audio track when another audio track is playing.

The intention is to have what you have designated as the “background” track not interfere with the main audio track.

It is most often used when you have a narration or voice over track and some background music or other audio.

Before automatic ducking was introduced you had to set key frame markers visually on the background track where you could see from the main track’s wav file that there was narration occurring.

Then, step by step you had to manually raise and lower the volume of those sections where the narration occurred.

Man, this was so fiddly and time consuming you would not believe!

Anyway the auto ducking modules have taken that pain away so the video below shows how it works in PowerDirector but really, it is almost identical in every other software I know of.

With the addition of key framing in most modern video editing software the ability to “turn on” and “turn off” effects and events within a clip or sequence of clips was introduced.

This was a huge step forward in the world of consumer level video editing but for most people, they would be totally unaware of its importance.

The main reason for this is that key framing on the face of it, is hardly the sexiest of additions to your software!

There is nothing inherently marketable about it really!

The real value of it is in how you can apply effects and motion elements to your projects and of course that’s all a bit too long winded for your average marketing campaign!

My advice to anyone once they have gotten themselves to the point of moving fairly confidently around the their software is to begin exploring the world of key frames.

It is amazing how you can take what appears to be a simple effect or motion element and add so much more through the use of key frames.

The link below leads to a tutorial on just one of the ways you can use this tool but a quick search on the internet will reward you even more.

So, OK this is about two months after the release of the new version (21) so let’s be kind and agree that the reason it took so long was because they were making sure they got it right… or something.

This one is actually pretty good and simply runs through all the most basic functions and features of the program showing how to access and use most of what is in there.

Bear in mind Pinnacle is kind of huge when it comes to features so they are not going to get everything covered in one video.

So the other day I was trying to get some generic outdoor footage of just some city scenes for use in a project I have been working on. Instead of using the viewfinder on my cam as I usually do I was using the LED screen. Not really sure why but there ya go! Anyway I returned to the office and transferred the footage to my computer to check it out. I was surprised to see there was a sort of hazy effect running through all the footage. I went back outside to see what was going on and strangely it was a bright beautiful day. I couldn’t work out why the footage was like that. Of course my paranoid mind started racing through a number of scenarios involving total replacement of the camera with the associated plundering of my bank account. I called a friend who is a pro and asked him about the problem expecting to hear the worst. His first question was, “Did you check to see if the lens was clean?” Doh! I felt like such an idiot because instead of working my way through the problem from simple to complex I went straight for the nuclear option! So in celebration of my idiocy I offer the following video on how to properly clean your lens.

This is a “How to” video specific to Pinnacle Studio users on how to use the rotate functions within the software.

Like most things in Pinnacle there are many ways to skin the cat and many ways to access the tools depending on what you are doing.

This is a good example of what separates Pinnacle Studio from the rest of the market in that the software offers the ultimate in control over what you want to do.

You can makes changes to assets while they are still in the library so that asset is always that way or you can change an asset when it is on the timeline so that the original remains untouched.