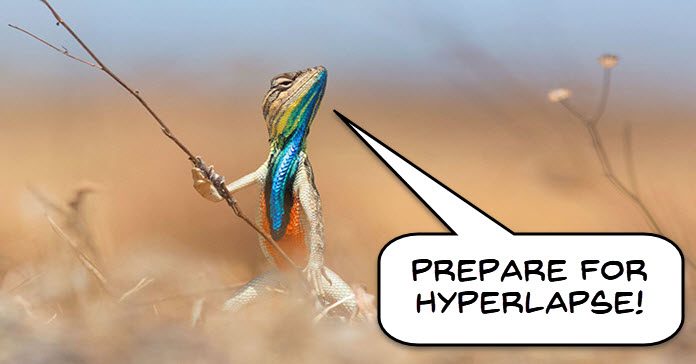 Very often when you are wandering about the internet trying to find information on editing and how to cut things together you come across the term “match cut.”

It is implied that this is a cut between two shots where the components of both shots although quite different, are in many ways the same.

Imagine a guy in the desert looking up at the sun with the sun filling the frame.

This dissolves into a shot of a light bulb filling the frame in the exact way the sun did then slowly pulling back to reveal we are now in a room somewhere.

This is what is referred to as a match cut.

However match cuts can come in an almost infinite variety of ways and shapes.

Check out the video below for a great introduction to all sorts of match cuts, many of which you have actually seen before.

How to Create a Hyperlapse Video Effect

This is another in the continuing series of tutorials being put out by Filmora at the moment.

This one covers the subject of creating hyperlapse videos. Now I am guessing that most people are familiar with time lapse videos where you stitch together a series of either very short videos or still images together so that the effect of speeded up time is achieved.

A hyperlapse follows many of the same principles with one major difference.

In a hyperlapse the position of the camera changes over time whereas with a time lapse the camera always remains in the one spot.

This changing of camera position does mean that to create a hyperlapse you have put a little more planning into the process but with some effort and attention to detail some pretty amazing effects can be created.

In watching the video I did notice that although the basic concepts are there it is perhaps a little short on details.

So underneath the video you will also find a link to an excellent article Magix put out a while back detailing a little more comprehensively the hyperlapse process.

On that page you will also find a link to their original article on creating timelapse sequences.

Most video editing suites these days come with at least some level of sound effects included.

The quality of those effects varies quite a lot but when they are all you are used to you kind of “settle” for that level. In fact most of those canned FX are OK but if you think that’s where it all end you have another thing coming.

If you go to a movie theater or even just watch a DVD at home listen to the sound FX alone you will notice a huge difference.

Professional sound effects are not just more realistic, they have a greater depth and instead of just “filling in” where there should be sound, they actually add to the experience.

In light of that this week I managed to find some real professional effects which you can find at the link below.

I have included a video to give you an idea of the depth of sound they offer.

The guy that makes them is obviously a pro so you have to pay for some of the effects packs.

However having said that he is only charging a couple of bucks for each one and in fact a number of the packs on offer are free to download and use as well.

Flashback sequences can be just about the most tricky of things to get right in any video project.

Unless you use a specific set of signals that really announce to your audience that we are going into a flashback, things go to hell in a basket real fast.

I know because I get to see it in action regularly.

My wife speaks English as her second (actually third probably) language so when we are watching movies very often she is augmenting her understanding with the subtitles.

That’s all well and good until it comes to changes in the movie marked by visual clues like a flashback sequence.

Because she has a degree of attention on the subtitles very often she misses these cues and very soon starts asking what seem to my son and I, some very strange questions!

So, flashbacks are good BUT, there are tools and rules. Check the link below.

So last week I included a link to a video on how to access the transitions section of the PowerDirector program.

Not being a big fan of these pre-packaged effects I was a little reluctant to show anyone where they are but hey, I guess I can’t hide them forever.

This week we go a little deeper and I think this is the real power in the modern editors.

Instead of adding those bland, tasteless, pre-packaged transitions why not whip up a fresh batch of your own!

You know it always tastes better when it is home made with love!

In this video you get to see just how versatile PD is when it comes to baking your own transitions.

And by the way, even if you are not running PowerDirector I bet you your program can do this as well.

Back in the day, (and believe me, I am totally dating myself here) the format used by just about all budding amateur videographers was the good old DV.avi format.

This was a standard definition digital format remembered fondly because it wasn’t dramatically compressed like modern formats so was a breeze to editing on just about any computer.

One of the features of this format was that it recorded a time code as it went along so that if you wanted you could hide or display the time-code when editing.

When more modern formats arrived to allow for high definition it seems that the time-codes disappeared.

The real story is that all video files have a time-code inside them but they are created in a way that does not allow them to be displayed.

So to compensate for that you can now use an effect to achieved the same thing.

The video below shows how to access the time-code filter in Pinnacle Studio.

I don’t have one for every piece of software but generally a quick look through the effects library will get you sorted.

About a year ago now Magix changed their licensing model for just about all their editing software offerings.

Instead of going for the yearly update model requiring the user pay a fee for the latest version and new features they opted for a yearly licence.

That means you get all updates and upgrades for a year after purchase and when that year is up you can pay a reduced fee to remain at the same level or, not pay the fee and only get critical updates that affect functionality.

There are pro’s and cons to both types of licensing whether it is a subscription like Magix or a perpetual lice like most others and I am not going to go into to it here.

However one of the downsides from the software company point of view is that if the software is being continually updated and upgraded throughout the year the marketing department has no “big moment” like a new version upon which to base a campaign to drive sales.

Instead of being able to make a huge noise about all the amazing new features in “This Years Update” they have to find some other way of generating excitement which brings us to the article linked below.

Now don’t get me wrong, I think Movie Edit Pro is an excellent piece of video editing software but really, those marketing guys are really clutching at straws right now!

The “Big News” is that Movie Edit Pro has added an awesomely amazing feature called the Media Pool… woohoo!

The reality is that they have redesigned the library interface so it has bigger thumbnails and look more modern and make it easier to see what you are doing.

They have also added a shop so they can sell you stuff from right there in the interface.

There are many, many other reason why I recommend this product, two of which are NOT big thumbnails in the effects area and access to a shop.

For anyone using the free video editor provided by Black Magic Design, DaVinci Resolve there has been a recent update to the software.

The version in question is version 12.5 which is the previous one to the current Resolve 14 release.

As it stands the 14 version is technically in a public beta release stage but I am guessing it must be pretty close to the final version.

As for Resolve 12.5 this will be the final update of the program before it is retired and 14 takes over.

They have addressed a number of bugs in the software but for most people these may not really apply.

Most of it concerns the very high end pro level file formats and functions so if you are a reader of this blog it will probably mean nothing to you!