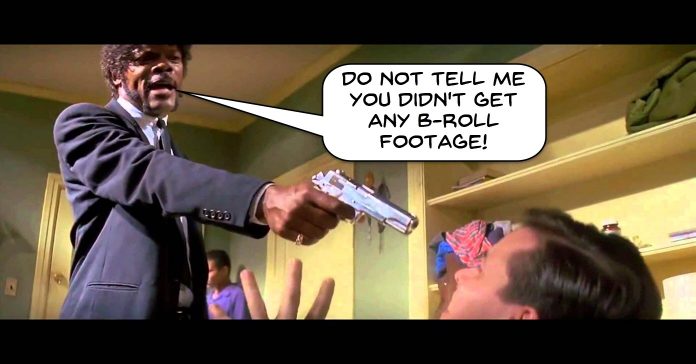 How To Get The Best B-ROLL

One of the great advantages we have in living in the digital age of video is that we don;t have to worry too much about the quantity of footage we take.

Battery life is always improving and storage media is pretty cheap these days compared to the past.

Previously we had to be a bit judicious about what footage we took and how much of it we took and as such tended to end up with most footage being of the subject matter at hand.

This caused home movies to be very one dimensional and amateurish because of one huge missing component.

That component was what the pro’s call B-roll footage.

B-roll is just about any footage that is not directly on the main subject or subjects of the video.

Now that we have the freedom to add that into the mix it provided a very easy way to add a far more professional look to your projects.

Check out the video below for a great explanation of B-roll, how to take it and how to use it in your videos.

There are a few subjects that I tend to bang on about in my weekly Roundups and although using cheesy transitions is probably the champion the other one I tend to hit on is the concept of story within any video project.

It is all very well for me to tell you that even the most simple home movie project can be lifted greatly by using the concept of having a story but why listen to me!

It is an idea that can be difficult to wrap your head around, so instead of hearing me bang on about it yet again,, watch the video and listen to someone else!

I was recently answering a question over on one of the software user groups on FaceBook regarding the use of 24fps setting to achieve a “cinematic” look to videos.

Whilst there is some argument as to just how “cinematic” a video is going to look if it is shot and produced at 24fps I personally think that anyone doing it is missing the point.

Simply shooting at a different frame rate does not somehow magically add up to a cinematic look.

The kind of look that you see in full Hollywood style productions comes from a whole range of things well outside the idea of frame rate.

It has to do with lighting, shooting, color grading and a whole bunch of stuff that you and I probably are not going to be able to reproduce.

There are however shooting and editing techniques that you can employ to give your projects a more professional polish.

Check the video below for 5 techniques you may be bale to use in the future.

Maybe not all of them are applicable to you or your situation but i think you could use at least a couple.

It’s All About the Low Light

This week there has been a lot of hoo-ha over the release of the new Panasonic GH5S camera and much of it has been concerning the improved low light capability.

Now I am not one for going too much into all the latest and greatest in video cameras mainly because I find the market itself overwhelming!

I think the last time I even tried to go through the processing of choosing a video camera it wasn’t too long before the only result I was going to achieve was punching a hole in my monitor.

It really is a bewildering subject at times and when you factor in the almost constant change with regards to updates and models and new releases… well I think you get the picture.

Anyway this new release reminded me of one point in choosing a camera at the consumer level that I think bears repeating.

Anyone trying to make a choice in this field is going to be bombarded with information about all sorts of things.

Some of it is technically important and some of it is just marketing guff to make you want to buy something.

Among all of it there is one factor that you really should be taking a look at and that low light capability.

Years ago the auto focus was a huge factor with the introduction of high definition but generally speaking these days most of the top brands have pretty good auto-focus.

If ever there was a “deal breaker” feature I think that these days it is low light performance.

The average home user will certainly not be lugging around a full lighting set up, so any camera you buy should display good clear performance in low light conditions.

Bear in mind that “low light” begins at the level of light you get in a well lit living room.

That and anything below, is low light.

I Love the Night Life

I have added a few tutorials on this site over the years on how to shooting time lapse videos.

If you want to take a look at any of them just use the search button on this page and you should be good to go.

This week I came across another one that deals specifically with time lapse shot at night.

Given that this presents a rather unique set of factors to anyone wanting to do it I thought I would add it to the Friday Roundup for future reference.

It is not unusual for me to receive questions about the various functions contained within the software I have review on this site.

It is also sadly not unusual for me to totally forget the entire range of functions each particular software package has!

These days the features seems to just go on and on and for me, I tend to remember mainly those that I would use in my own projects.

So this week the video below came up in my inbox and I was completely taken by surprise because as usual, I had totally forgotten about it!

In fact someone asked me a few weeks back about 3D titling in relation to some software and I answered back that I didn’t think anyone had it.

Not so unusually, I was wrong!

Turns out Corel have included the Boris FX title module since last year… not sure how I missed that! Check it out, it is totally cool if you like that sort of thing.

This is the second video in a “Workflow” series by Maliek covering the actions of importing your assets into PowerDirector and for most would seem like a bit of a no-brainer right?

Well yes and no because it is at this point of the workflow that you are either setting yourself up for editing hell or editing heaven.

Mechanically importing assets is no big deal in itself but it is how you do it that makes all the difference.

It is at this point of the process where you should be taking the time to make sure those assets are not just imported but imported into folders and marked in such a way as to make them easily identified and found for later when you will need them.

There is a second version below the video for Pinnacle Studio as well.