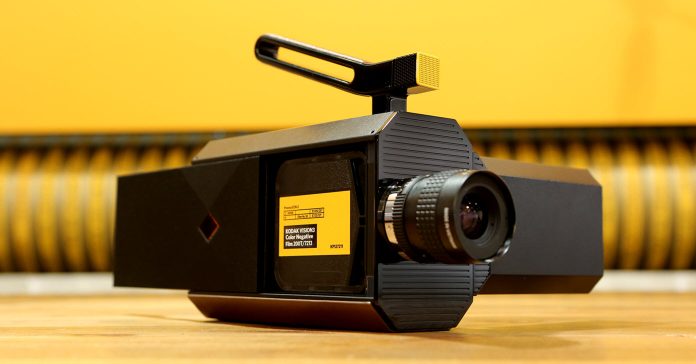 The Return of “Dad Movies!”

I don’t often cover cameras on this site because to be honest it is a full time job just trying to keep up with the latest releases let alone any of the technology in the area.

However this week an interesting one came onto my radar which I thought was worth mentioning.

This is a case of everything old is new again with Kodak releasing of all things a brand new Super 8 camera.

Now for all you kids out there, Super 8 refers to 8mm FILM… that’s right FILM!

Super 8 was format developed way back in the dark ages before digital and was a way that amateurs could record movies right there at home… aw shucks!

The cams used to accept a cartridge that had the film loaded so you just popped in a new cartridge and fired away.

Once the cartridge was all used up you then sent it into a photo developing shop (I don’t have time… just Google it) and your film was processed and returned to you.

Now given the convenience and quality of digital video these days you would wonder why Kodak have done this.

Well the bottom line is that just about everybody at a pro level who is shooting video these days is actually trying to achieve the look and feel of real film… go figure.

So Kodak thought why not make that available to everyone, even if it is at only the 8mm mark.

We shall see how it all goes!

What It Takes to be Successful on YouTube in 2017

One of my “go to” guys when it comes to getting videos onto YouTube and the general subject of being successful on YouTube is Tim Schmoyer.

His channel Video Creators is one of the more successful channels on YouTube and he provides incredible value to his viewers on the subject.

If you are looking at YouTube with a view to perhaps getting your own presence there or are struggling to gain traction with an already established channels then I would highly recommend spending some time on Tim’s channel to further your knowledge.

YouTube is a busy and competitive space where it is becoming increasingly harder to get any sort of exposure.

Bear in mind it is not an impossible task but there are some very basic things you have to get right before you are going to get anywhere.

This week Tim put up a video (below) covering what he and some pretty successful YouTubers think you will need to have covered moving into 2017 and it is well worth taking a look at.

Given the stresses and strains put on your computer when you are editing videos it is hardly surprising that every now and then you suffer from a crash of some kind.

It may be something as innocuous as a freeze where what you really have is a crash but it just doesn’t look like one, or you may suffer a blue screen of death catastrophe.

Either way it is always a bit of a lottery as to what you will have left when you get everything restarted.

There two things to keep in mind under these circumstances that should help you remain calm or at least calm down a little faster.

The first is that regardless of what editing software you are using none of what you think you have edited has actually been edited!

It is efficiently and accurately noting down all your information and all of what you want to have happen.

And just like a public servant it does absolutely nothing about it!

All it is doing is creating what is called a project file that contains all your hopes, dreams and desire for your project.

It is not until you specifically tell it to render your project that anything concrete is actually happening and even then none of your original files are ever touched in any way.

So in the event of a crash most times all you have to do is reload the projects file and you are back in business.

The other tool you may need is one that keeps a record of the files you have in your library.

Again, remember that your software does not physically move your files into the library.

The library is just an arrangement of links to media assets that can be anywhere on your computer that will store files of any kind.

In the event of a crash sometimes those links can get broken however most program keep tiny records of those links and can restore them automatically.

The video below goes into relinking in Pinnacle Studio but most good quality software will have something like it.

There are many opportunities these days to make videos that include possibly the one character that you don’t want to include… and that character is you!

Most people are strangely averse to having themselves on screen at the best of times and when they later look back over the footage it feels like everything they thought was going to be bad about it is bad!

Well it turns out there is a scientific reason for this and in fact it is quite an evolutionary factor that is coming into play here.

Apparently it all comes down to a thing called “confirmation bias” which is a psycho-babble way of saying what is going on.

In plain English it goes a little like this.

As we survey our environment on a constant basis we are making decisions and drawing conclusions based on what we see, what we have seen that is similar in the past and finally (this is the big one), how to be right.

From an evolutionary perspective the question of right and wrong translate into live or die.

You could put it this way: Right = find food, Wrong = become food!

The overriding point here is that whatever the decision or conclusion, it has to happen fast.

So in this modern era we have come to a point where survival is less a matter of dodging the local wildlife yet this same mechanism still remains in place.

To that end confirmation bias means that we are constantly seeking confirmation of an existing position rather than analytically going through the facts in front of us.

So based on that here is the key quote from the original article I read:

“If you think that you’re awkward on camera, you’ll be looking for evidence of that when you review the footage.”

You look awful because that’s how you think you are going to look so your brain only accepts information that confirms you original position.

The good news is that there are strategies you can use to overcome this situation and get yourself performing better (according to you) on camera.

However it is important to note that strategy number 4 is probably the one you really need to take on board:

Yup, while you are sweating over every little detail of your seemingly poor onscreen performance, no-one else really cares about that and if you described what you were seeing to them they would probably think you were insane!

There are a number of basic rules when shooting and editing videos which, if followed will always make them look better.

However when you are just starting out it is hard to perhaps see how they do that or understand how to actually implement those rules.

If you look at your videos and then look at videos that have been professionally shot and edited I think to most of us it is obvious that the pro’s do it better.

What is not so obvious is exactly what it is they are doing that makes it better.

Of course the guys in the marketing department of the software makers or camera manufacturers will always tell you it is because you need the latest gadget or camera model or software upgrade.

But I think we should all know by now that’s just not true.

In fact that difference generally comes down to a few simple rules which if followed can take your projects up to a higher level.

Now of course just following a rule or two is not going to give you a Hollywood blockbuster right out of the gate and to be honest that’s not what we are looking for here!

However just learning a few of those rule well and applying them with practice will most definitely raise the level of your videos.

Here’s one to get you started, the 180 degree rule.

Learn to use it and then learn to break it!

One of the ongoing problems a lot of newcomers to video editing have is trying to sort out all the different parameters of video files.

With a history that stretches back to film the difficulty with an evolving subject like this is the way we move forward from one format to the next whilst still trying to maintain compatibility with previous things.

Over time this has led to things like frame rates and resolution having all manner of settings available depending on how the footage was obtained and what the ultimate viewing platform with be.

Film parameters rolled in the original video parameters which then added T.V parameters then on to CRT monitors for computers until finally we are at the point of mostly using viewing screens that have no need for any of it really!

So when it comes time to outputting that final video masterpiece you have been working on, you can be presented with a bewildering array of choices many of which seems to make no sense at all.

But even then it can still be a tad confusing when putting it all into practice.

Check the article below for a straightforward explanation of pixels as they apply to video resolutions.