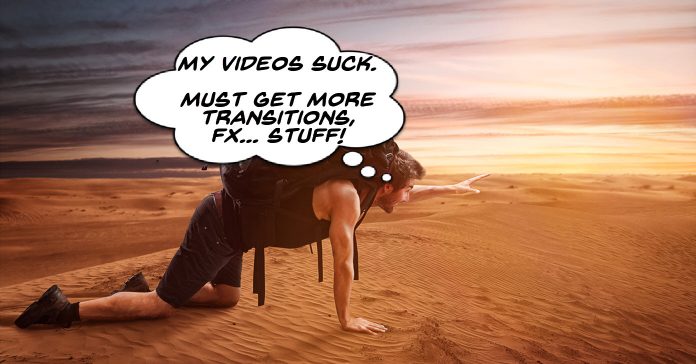 Take your Sound Design to the Next Level

A very common set of questions I get on this site and I see on many video editing forums is, “Where can I get more… (insert appropriate asset here) for my projects.

This kind of request generally covers the entire range of just about anything you can add to a video.

This question also rears its ugly head when I get questions from people regarding what video editing software they should choose.

The problem is that in both cases the search for “more stuff” is really a distraction and is a direct result of our being subjected to endless marketing campaigns.

The best software must have the most stuff, the problem with my projects is that I need more stuff to make them better.

All of this is a lie.

The amount of stuff you get with an editing program is irrelevant because all of them have so much stuff you will most likely never use 90% of it.

Why do they have so much stuff?

Because everyone else has so much stuff!

Here’s an example of just how crazy this is.

I recommend Filmora (My Review Here) as a great choice for the absolute beginner or the person who really wants to keep things simple.

The person who is not interested in all the wizzbang stuff but just wants to edit some projects to make videos.

All the others have WAY MORE than that!

So if you are feeling the need for more stuff fight that urge and do this instead.

Go into your effects, transitions or whatever you think you need more of and experiment with the settings on offer in each of them.

What you will find is that the majority of them can actually be adjusted in many, many ways to create brand new stuff!

The video below just gives one example of doing this with audio files.

This week Corel have released the 2019 version of VideoStudio.

In an act of pure creative genius they have named it, VideoStudio 2019!

They have retained the two tier levels of the software with the Pro version being the simpler one and the Ultimate version being more… ultimate!

New in this version is the addition to the Color module of Color Grading as well as added controls for finer adjustments.

They have also added custom transitions giving the ability to create your own transition from existing footage and mercifully lower your reliance on cheesy pre-packaged ones.

VideoStudio could always achieve a split screen effect but this year they have added keyframing to the operation as well as the ability to customize how the split screen appears.

There are a few other new features as well as some of the existing ones being upgraded or improved.

Overall this looks like a pretty good update and so far there has been no yelling, screaming or tears before bedtime over on their User to User forums!

Hopefully I will have a complete review up on the site by next week.

Other Updates This Week

In other update news users of PowerDirector 17 should be aware that a patch has been released this week addressing a few glitches so you may want to go and get that installed.

Magix have released the 2019 version of Vegas Movie Studio taking that one to version 16.

The link below leads to a collection page with subsequent links to a whole range of site offering free LUTs.

If your editing software can make use of LUTs then grabbing a bunch of free ones and having a play with them is a great way to get started.

Be warned though that some of the sites being linked to require a sign-up to get the free LUTs whilst others do not.

And while we are at it, woohoo, more free stuff!

These are exactly as advertised being 35 texture overlays you can download for free and use in your editing software of choice.

Nothing much else to say about it really! No sign-up or emails addresses necessary.

A dolly zoom or Vertigo effect is probably an effect you have seen before but never really knew what it was that you were looking at!

So directly beneath my blurb here there are two videos.

The top one is just a video showing the effect in a few well known movies so you can get the idea of what we are dealing with here.

Most notably the first clip is from an Alfred Hitchcock movie, Psycho.

Hitchcock was very fond of using the effect and the reason a dolly zoom is often referred to as the “Vertigo” effect is because it was first used by Hitchcock’s cameramen Irmin Roberts in the film Vertigo.

To correctly achieve the effect the camera has to be mounted on a dolly or similar arrangement and is slowly moved closer and closer to the subject as the shot unfolds.

At the same time the camera is being zoomed out so you end up with an effect where the subject seems to stay the same while the background seems to be zooming in or out.

It is quite an unnerving effect but pretty effective.

You can replicate the effect in software but bear in mind it really can only be done with a shot taken specifically for that purpose.

This is a simple tutorial using Vegas Pro on how to execute J-cuts and L-cuts.

The reason I am including it is because it is one of the most straightforward ones I have seen that shows the technique, why it is used and why they are called that.

So this is a pretty specific video for anyone wanting to start a channel on YouTube or has already started one and is looking to some traction.

The video itself is around an hour long and pretty much covers everything you need to know to get started towards being successful on that platform.

If this really is something you want to do then I would urge you to watch the entire video start to finish.

You simply cannot load up a few videos on YouTube anymore and expect anything at all to happen.

The platform does not work that way these days and actually has not worked that way for a long, long time.

Success on YouTube depends on a number of very specific factors and until you get all those ducks lined up in a row you will struggle.

OK so before you check out this video on creating motion graphics I think a couple of warnings are in order!

The first and most important is that the guy doing the demo is going really, really fast!

I mean he is just ripping through the steps at a frightening pace!

So if you are interested in learning the techniques shown be prepared to stop, rewind and re-watch as each part unfolds.

The second point is that the tutorial is being done using Filmora9 as well as Filmora Pro and these are very different programs in their feature set and layout.

It is a good example of the fact that most video editors have very similar features but slightly different layouts.

The thing to learn here is that the important part is the technique or effect being achieved.

Differences in user interface layouts are not that important.

How to Make a Boomerang Video without Instagram | Filmora9 Tutorial

Hey! All the cool kids are doing it on Instagram so it must be good right?

Anyway if you are wanting to jump on to the trend of making Boomerang videos but don’t really want to deal with the social pressure of Instagram here’s a tutorial on how to make them!

Yes! You too can making boomerang videos of your lunch to amaze your friends and make them envious of your awesome yet utterly fake lifestyle!