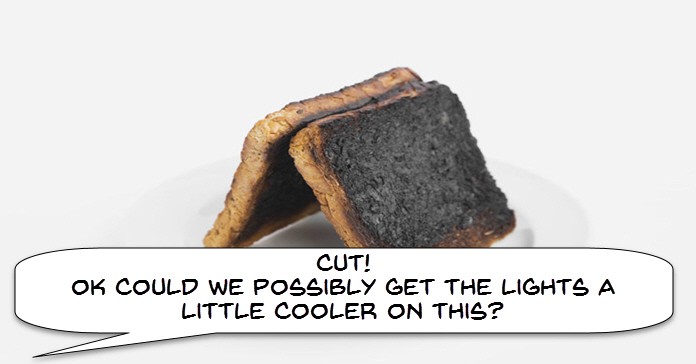 OK, so by including this article in the Weekly Roundup I don’t want you to get the impression that here at the DIYVideoEditor.com I ma starting to go all technical on ya’ll!

I say this because at first glance it would seem that a tutorial about quality of light rather than just where to put them is getting a tad technical but bear with me.

I am going somewhere with this! really! One of the key differences between the amateur videographer and the pro is the subject of control and this applies to shooting, editing the whole shebang.

At the very amatuer level the person shooting the video will most likely be shooting in auto mode on the cam and will be shooting whatever is infront of him or her.

He or she will be exercising zero control over any part of what is happening on either side of the camera.

When it comes to editing they will be similarly at the mercy of whatever was captured and will be forced to construct something from that.

As we move up the scale and get to the total pro we have absolute control being exercised over every little detail of the process.

Who stands or moves where, what is said, how the lighting is set, a script, the works.

Nothing is left to chance, everything is controlled.

The purpose of this site from an editing and shooting point of view is not to get you operating as a pro.

My goal is to get you operating as an informed amateur who can control some things but understands that there will be things that are out of control.

The key is that within those out of control aspects a knowledge of things, a recognition of conditions can help enormously in predicting outcomes.

This is what leads me to “quality” of light.

I have not included this article because I think you or even I are going to be setting and using professional lighting setup in our shoots.

This is not the level of control where we operate at!

However by understanding the way that each lighting quality affects the mood or feel of the shot you are taking you can make informed decisions.

You can be about to take a shot inside a house and notice you are getting light that is very hard on your subject’s face so you can decide NOT to take that shot.

You know you can’t change the light but if you change your position so that you are getting a different angle, or you ask the subject to look in another direction you may find a source of more agreeable light.

It is in this way that at the amateur level that you can use an understanding of the rules to your advantage without having to go into the whole process of setting everything up like a pro.

Will you always get a better result?

Maybe, but at least you are not completely at the mercy of your subjects and their surroundings. The more you understand, the better you can get at working within the limitations of the situation.

Just after the release of PowerDirector 15 CyberLink announced that they would be live streaming a seminar on the new software and run throughs of the newer features.

Unfortunately around the same time there was a typhoon here in Taiwan causing a bit of disruption to everyone’s schedules.

The resulting confusion meant that the live stream CyberLink were intending happened at a different time.

So just in case anyone missed it below is an embed of that livestream so you can catch up.

It doesn’t cover every little detail of PowerDirector which would, let’s face it, take days but it does give a good overview of some of the newer features including the 360 degree editing module and the updates mask design tools.

Given that CyberLink PowerDirector is my top choice for video editing software at the moment it tends to get the most attention from visitors to this site.

However when I list it as my top choice I am doing that because it is the one that has a full range of features to do just about anything you want to do with your videos.

The problem is that there are many people who want a video editor that have absolutely no use for many of the more advanced features offered by PowerDirector.

For them something simple and effective like Filmora would be far more suited.

So if you are looking at editors at the moment and trying to decide check out this video below that just simply goes through all the functions in PowerDirector.

The question you have to keep asking yourself throughout is whether or not you would actually use the features being indicated.

Let’s face it, we all probably set out on a day when we are going to be shooting some footage with all good intentions.

Unfortunately none of us have actually been employed by the family or our friends to document the day!

On top of all of this (because we are not being employed!) we are expected to pack the car, help get the kids organized, light and attend the barbecue, supervise water activities or a million other things.

Under these circumstances it is pretty easy to forget everything you have been trying to keep in mind when it comes to shooting and editing you videos.

So to help with that Magix published a handy little list of some of the key points to keep in mind as you head off into the unknown.