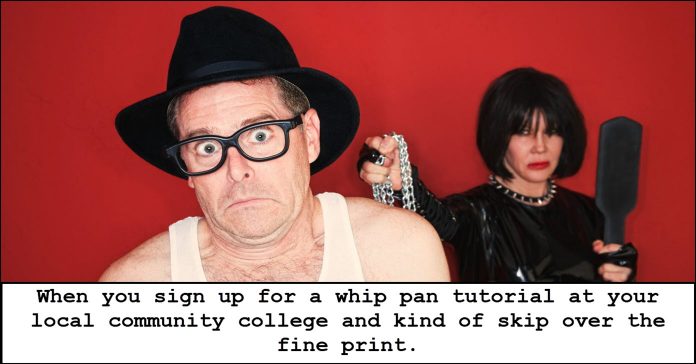 OK it has probably been a few weeks at least since I posted a “How to” video on whip pans so here we go!

The following tutorial is shown by using FilmoraPro but as is the case most of the time, the brand of software is pretty much irrelevant.

You can actually achieve a decent whip pan in camera if you set your mind to it but honestly, shooting for it and completing it in software gives more reliable results.

In the video they use something called a “Push” transition to get the “whip” part going as you will see.

If you are not using FilmoraPro just look for any kind of transition in your effects library that allows you to “push” one clip into the next in a kind of sliding motion left to right or right to left.

You can then add some motion blur to is and you should be good to go.

You can check out FilmoraPro Here

Every month or so the team at CyberLink host an online webinar covering various aspects of using their software.

It usually consists of very good onscreen demonstrations of how to achieve a whole range of things to do with either video production or image editing.

In this one they cover how to stabilize shaky videos, create an Express Project, create a Video Collage and how to add motion titles with Title Designer.

Although obviously all of these steps are being shown using PowerDirector there is wealth of information included on editing videos in general.

So don’t worry if you are not using PowerDirector, the tips and techniques apply regardless of what software you are using.

My PowerDirector Review is Here.

Pinnacle Studio is one of the video editors that I recommend on this site BUT!!!

See? That was a really big BUT!

I only recommend it for people who really want to take their video editing right out on to the bleeding edge.

It is definitely not for someone who wants to just slap a few clips together and upload to YouTube.

That really would be like taking a tank to a knife fight!

The key to Pinnacle Studio is control.

Most editors let you do things just fine, Pinnacle let’s you do that and then much much more BUT!

Oops, there’s another one!

With that greater ability and control comes a steep learning curve and an interface that is just jam packed with… stuff!

To get an idea take a look at the video below.

There are three examples of using the motion tracking feature.

The first two are exercises you could easily complete with most editors that offer motion tracking.

The third one could be done with a few others but there is no way those others could allow the level of control shown when the “fine details” are being added.

How to Re-purpose Your Video for Social Media

If you are trying get your videos in front of as many people as possible there are few overall concepts that have proven to be successful.

The first of these is having your videos available in complete form on one platform.

For most people that ends up being YouTube but your own website could serve the same purpose.

The reason for this is that there are no restrictions on how long the video can be as well as offering fairly universal upload parameters.

Of course once you have those videos on YouTube you can then create a channel around them and take advantage of a number of optimization feature within YouTube to get views.

Leaving it at that is to really not take advantage of what is available out there especially when it comes to social media.

Now you could take the “minimum effort” path and simply post a link to your videos on various social media sites and this would certainly be better than nothing.

On the other hand you could go whole hog and rework those videos in a size and format acceptable to those other social media sites like Instagram and Facebook.

To get some ideas on how to do this both effectively and creatively check out the video below.

5 Tips for Filming Yourself + How to Be Better on Camera

As a complete on camera tragic myself I always check out the videos offering tips on how to be better on camera.

I always watch them and nearly always add them to the Friday Roundup.

My hope is that someone… anyone, out there may benefit and actually get better on camera.

I know that for me it is a lost cause and that I would probably be far better suited to radio… as long as I don’t have to talk or listen to a recording of my own voice.

Another excellent video from Tim Schmoyer demystifying and debunking those silly ideas that seem to proliferate about YouTube.

The original question addressed in this video was regarding the number of videos you need to upload to YouTube before they “notice” you.

Like a lot of these questions it is kind of the wrong question to begin with.

It is based on an assumption that is simply not true.

That assumption being that there is some kind of magic number of videos you need to upload before “being noticed!”

In reality any video uploaded to YouTube is automatically noticed.

The real question in YouTube’s mind is what happens to that video from that point forward… but I’ll let Tim explain it better.

DJI Drones – Everything You Need to Know

DJI have had a brief but at the same time very interesting one since their inception not so long ago and these days are the gold standard for drones.

The video below makes for an interesting look at how those guys got started and where we are now when it comes to DJI and their range of drones.

A few weeks back I posted an article covering the development of Blackmagic over the years and how their introduction of both DaVinci Resolve and their cinema cameras had disrupted the market in such a good way.

Let’s face it, they have provided access to a cinema grade camera for a hair under $1000 so that gotta be a good thing and it is!

However that really doesn’t tell the full story as far as the costs go because for that $1000 or so you just get the camera body.

The damage to your wallet is not actually going to stop there!

In the article linked below you can get a far better idea of just how much it still costs to get into the pro end of the market when it comes to shooting video even at the bargain basement level!

Just a simple tutorial here on manipulating an image as an overlay with keyframes to create a spooky red eyes effects.

How to Reset Windows – The Nuclear Option

If you are running the Windows operating system and are engaging in video editing the reality is that your system is degrading incrementally over time.

Although Windows has greatly improved over the years and this degradation is much slower than it was before it will still be happening.

There are some excellent tools around, one of which I highly recommend to combat this slow decline!

That tool is Ccleaner and its ability to keep your system uncluttered is a great way to keep things going.

However you may at some time get to a point where the inevitable decline becomes noticeable with things becoming not so “snap and pop” as they were before.

There is a nuclear option for dealing with this which is to reset the entire system back to factory settings.

Basically it is a clean re-install of Windows itself.

I have only had to do it two times in my life and each time it was a nerve wracking experience!

This week I came across a complete guide to doing a reset and I have to say I wish I had access to it before!

Anyway if at any time you are going to go for a full reset then keep this reference handy to guide you safely through.