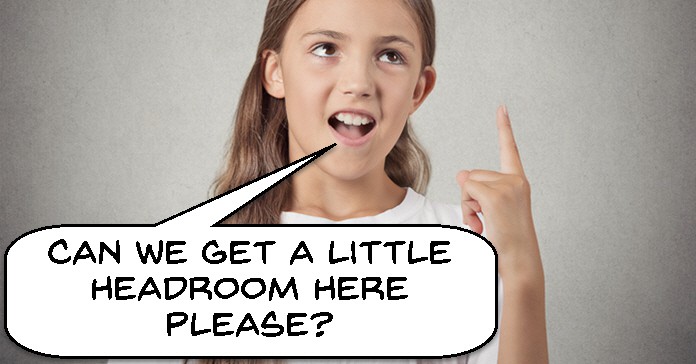 One of the little tricks that you will never actually see professional cinematographers use in their framing is headroom.

Generally speaking when you or I are trying to get shots of whatever event it is we are shooting our main goal is to try to keep everything that is happening somehow within the frame.

In fact for many of us, especially those with kids, achieving this could be considered the height of cinematographic genius!

There are however time for all of us when the pace slows down even just a little and we may find just enough time to actually compose a shot or at east make an attempt at it.

If you take a look at the Shooting Better Videos section of this site you can pick up a bunch of tips on how to go about this but there is one thing I think should be kept in mind for the amateur video enthusiast.

Missing shots or spending too much time trying to get shots just so you can follow the rules or do what you think you are supposed to do is totally missing the point.

So I think it bears repeating exactly what the point is.

You see when a pro is setting up a shot or in the field getting a shot he or she is not “thinking” about the technical details that go into getting the exact shot they want or need.

In fact there is very little thinking going on at all.

What they are doing is simply “doing” the actions to get the shot and probably the best example of this in your own life is tying your shoelaces!

When you engage in that activity you don’t think about it at all do you?

You simply do it.

And in fact you can just do it so effortlessly you can carry on a conversation at the same time.

The reason for this is that you were originally taught how to do it and then you repeated that action so many times that it became something you no longer “know about” or “know how to do.”

It became something that you just know.

The same goes for the pro’s when shooting.

The way in which this applies to the average person shooting video at an amateur level is that if you learn a little of the basics, then practice them many times, after a while the lesson of that basic will ultimately find its way into your actions on an automatic basis.

And this is the point.

Learn a basic or two regarding shooting.

While you are shooting be aware of those points over and over until before you know it you will be incorporating that basic into your shooting without even thinking about it.

Take a look at the article below on Headroom.

Next time you are shooting, just be aware of headroom as a factor in your framing.

Lather, rinse and repeat over and over until you are just doing it.

At a professional level of video editing and production of course the big catchphrase of the moment is 4K video or Ultra High Definition video.

I am not going to go into all the technical details of what it is right now but recently I have noticed the inevitable “knock on” effect that these bleeding edge technologies invariably produce at the consumer level.

All of a sudden every consumer level video editing program is offering 4K capability and it is all presented in a shiny marketing package as being that thing you simply cannot live without.

This is regardless of the fact that most people are not actually recording 4K video or even have access to it in the first place!

For the vast majority of people the display system they have will not show any visible improvement when showing a normal HD video and a 4K video.

On top of that if you have a 4K capable camcorder or camera it is more than likely that its ability to capture 4K at a quality higher than normal HD is probably negligible because of the restrictions imposed by the CCD of the device in the first place.

In fact even the top end of the consumer level of video capturing devices are at a stretch capturing HD in the first place so it is unlikely that they are going to do 4K any better.

On top of that there is still the problem of the sheer size of the files and the computing resources needed to manipulate these types of files.

So my advice at the moment is ignore this form of video video a little while yet until they truly drop it into the consumer range of the market and are not just shiny new things with which to distract a potential buyer.

Below is a link to an appraisal of 4K by a pro and it makes for some pretty interesting reading once all the “new stuff” hype gets stripped away.

One of the video editing lessons you will hear repeated over and over again is that without good audio just about any effort you put into shooting and editing your video will basically be lost.

It is easy when getting editing to become lulled into a kind of “visual” mindset whereby everything you are doing is based on what you see.

I think probably one of the most common moments of disappointment with new editors is when they put together a project and feel it looks pretty good, burn it on to a DVD or whatever and then sit down and watch it for the first time.

In fact I can still clearly remember doing this myself for the first time and suddenly the entire project which I had thought was pretty good just seemed to be awful.

I sat there for a while trying to rise above my disappointment, trying to work out how my masterpiece has suddenly gone from genius to garbage!

Then it suddenly dawned on me what the problem was… it sounded terrible!

Now the difference between you and I and the average person watching a video is that we are going to be looking for what’s wrong.

The average viewer will not do that.

They will just zone out, click away or suddenly remember something more important they had to do.

So in light of that here is another tip carries great weight when it comes to video.

There is another old saying applied to video footage which is, “Garbage in = Garbage out.”

There is only so much you can do at the editing stage to correct footage that was shot wrong or not shot at all.

In fact unless you are going to be hiring a $5000 a day studio and an audio engineer there is even less you can do with audio to correct what you captured in the first place.

A great many camcorders and cameras at the consumer level can capture pretty stunning high definition footage these days but at the cost of size and budget the one area they still fall down in is that of the audio recording.

The real problem is that without a decent mic recording at high bitrates you are always going to have suspect audio and to that degree your video projects will be reduced in their standard.

Below is a link to an article on sub-$300 audio recorders.

Maybe they are a little on the high end of your budget range but the article itself offers a good perspective on their importance.

One of the features added to the new Version of Corel VideoStudio this year was multi-cam editing.

Some people may look at that think well what’s the big deal, you could always do that by adding assets to the timeline and switching between them.

In fact that is very true.

The reason this module in VideoStudio is considered to be a value add is because of a number things as part of that process it does that make it so much easier.

The first of these is syncing.

These days when editing things like family or personal events you probably have access to video from a number of sources.

Each of these will be operating on a different timecode and have different audio recorded.

Trying to get all these ducks in a row manually can be one of the most frustrating types of editing you can ever do!

The VideoStudio module attempts to take a little of the pain away by letting you load up all the assets and it will try to find common audio events with which to sync all the tracks.

On top of that instead of cutting and pasting clips or blocking them while others show, the module has a simple “switching” interface that lets you just jump from one asst to the next without actually having to touch anything.

Anyway, to get a better idea of it check the video below and my VideoStudio Review is HERE.

I found this article over on the Shutterstock blog and thought it was worth including this week because it doesn’t just apply to still images.

It applies equally well to video and is especially relevant for those of you who are trying to carve out a little niche on sites like YouTube.

One of the key targets for posting just about anything online these days apart from getting the item viewed is to have that item shared.

Sharing content usually results in further sharing and if you are very lucky and the content is good enough it just may explode and go viral. Let’s face it, that’s all “going viral” really means.

It’s just a piece of content that gets shared and then those to whom it was shared themselves share it and on and on it goes.

There are surprisingly few common traits to things that get shared and although you can never guarantee your content going viral you can at least pay attention to those factors to maximize your chances.