You are here: Home / DIY Video Editor Blog / The Friday Roundup – A Pinnacle Studio Update and Much More Stuff! 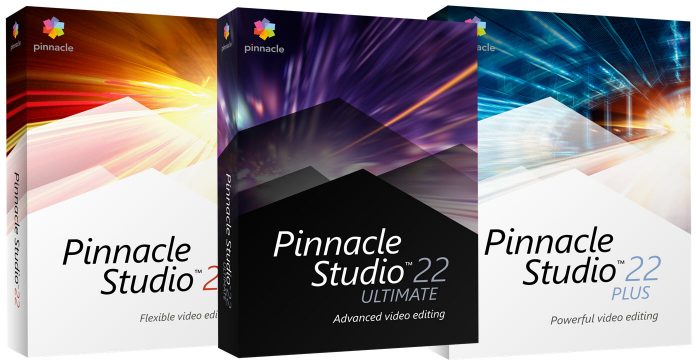 Well I guess the top news story for this week in the world of video editing software would have to be the release of Pinnacle Studio 22.

With this latest release of Pinnacle Studio Corel have further enhanced what has become under their ownership quite literally a video editing and post production beast!

If you are unfamiliar with Pinnacle Studio let me just position it within the consumer level video editing software market for you.

Pound for pound Pinnacle Studio is hands down the most powerful, feature rich video editing solution in its class.

It is about as advanced as you are going to get before you slip over into the world of fully professional video editing solutions.

Pinnacle themselves openly admit that with all that power and control there will be a learning curve to overcome before you can unleash its full capabilities but if you are willing to do that, you will be greatly rewarded.

Here is a quick run through of what has been added or improved in the new Pinnacle Studio 22.

All the above plus:

Again, all the above plus:

Any way here’s a slick promo they produced for the release with my full Pinnacle Studio Review Here. (I will be updating it this week.)

Fixt it in Post! Everyday Effects That Help You Shoot Quickly

This is an advanced video demonstration using Adobe After Effects and I have included it for two reasons.

The first is that it shows how quickly and relatively easily you can put together an advanced effect to enormously enhance any shortcomings in the footage you have.

The second point is that just about every video editing software brand I recommend on this site can carry out the steps shown in the video and produce the exact same result.

I have received a few questions recently from people who are in charge of videoing activities like high school sports teams or other group activities.

Their main problem was that they wanted to load a bunch of footage on to the timeline of their video editing software all in one go because that was how they were getting the footage.

What they then wanted to do was to isolate plays, or sequences that had one particular player or participant in them in order to create a sort of highlights reel for that person.

They then wanted to repeat the process for the next player and on and on.

The difficulty they were having was that they felt they had to load the video, cut out all the bits they wanted then render to the highlight reel, lather rinse and repeat.

However you do it the process is a little tedious but there is one feature most modern editors have that can reduced the pain.

Its actual name varies a bit from product to product but the gist if it is that you can choose to render from the timeline ONLY those clips or sections that have been selected.

To get a better idea the video below is a demonstration using PowerDirector.

I get lots of comments and questions referring to the term cinematic. How can I make my videos more cinematic sort of questions.

I kind of hate that term because it really is a rather general term that doesn’t really express anything in particular.

You can be completely certain that any decent movie director in conjunction with his or her director of photography have never used the word cinematic in their discussion on the project in question!

I think what most people really mean when they say cinematic is “professional.”

The sad news is that just because you have a camera that can record in 4K and a powerful computer with the latest version of (insert video editing software name here) installed does NOT mean you are going to get professional results.

Check out the video below to get just an idea of how much effort goes into creating a short travel style video which in most peoples minds would qualify as “cinematic.”

Although this is a video discussion aimed generally at the creation of YouTube content by a successful YouTuber there is a lot of info in it for anyone making videos.

Probably the first point covered, Finding the Story, is the most important but in the video there are some great explanations of how to go about finding the story and why it works.

YouTube Branding and WHY It Matters! feat. Roberto Blake

This is another excellent video on the subject of using YouTube as a platform for your videos.

Although the days of uploading a video to YouTube and having it go viral because there wasn’t much else to compete with are very much over, YouTube still represents a unique opportunity.

However in order to leverage the enormous viewership YouTube has to offer these days you really have to be on the ball.

In most cases it really is the just the simple things and the details that will allow you to rise above the pack BUT!

Unless you actually do them, you will remain as part of that pack.

With the rise of mobile devices being used for shooting and editing video an interesting side subject has arisen at the amateur level.

Very often I get queries from readers requesting tips on how this or that particular video was edited in order to achieve some effect or look.

In many of these cases the effect or look was not just achieved in the editing or post production stage but in fact originated at the shooting stage.

Before mobiles there was a tendency to just shoot however you could then take care of everything else at the editing stage.

These days with many people using smart phones to do the editing as well the limitations of those devices has placed an emphasis on the shooting.

From that we have over the past few years seen an increase in the number of shooting “hacks” being circulated around and to be honest I think it is a great thing.

Next Level Filmmaking: How to Shoot B-Roll Footage

It is quite often that we all hear reference to using B-roll in projects and how it can add dramatically to the quality of your videos.

In fact a simple search online will give you about a gazillion (OK, I made that up) hits leading to posts on that subject.

Like most things in life the actual use of B-roll and what exactly it is that you should be shooting for your B-roll is perhaps not so simple.

So if you want learn about what it is, how to shoot it and when to use it check out the video below which covers it all in an easy to understand way.

How to Shoot GREAT VIDEO in NATURAL LIGHT

At the very beginning of nearly everyone’s journey into shooting videos the subject of lighting will invariably come up.

Usually it is in a very generalized way such advice on always shooting with plenty light because consumer level video cameras need lots of light.

Like most “one size fits all” pieces of advice there is enough truth in it to make the original statement valid but it by no means represents the whole story.

Based on that, shooting in a well lit room should be “OK,” shooting on an overcast days would seem to be similarly “OK” but what you really need is a bright sunny day right?

Well you have to be shooting on a bright sunny day to begin to realize that it may all not be quite as simple as that!

For outdoor shooting what you actually want is a bright, overcast day!

Check out the video below for some tips on dealing with outdoor conditions that can present problems when shooting video.

OK first up, despite the title of the video below, this is not strictly a PowerDirector tutorial.

Even though it is done using PowerDirector there is nothing happening here that just about any video editing software I know of couldn’t handle because this is an almost mechanical effect.

So, the Casey Neistat effect is a kind of flickering transition Casey uses to either exit the shot or enter it and is quite effective if used sparingly.

Overuse it and it gets annoying pretty fast!