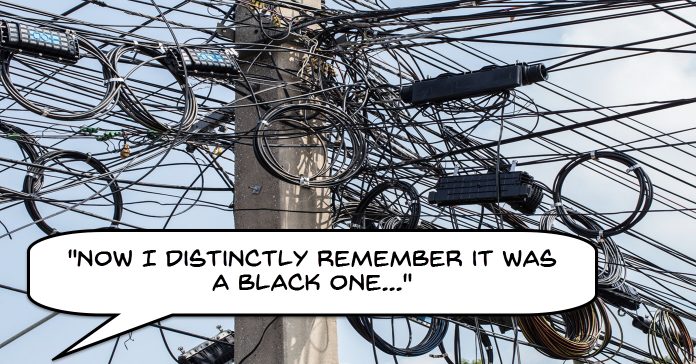 It doesn’t take very long for anyone to realize that these days the rate at which we all gather digital assets can be rather alarming.

Gone are the days when you had to shoot carefully because film (still or moving) was hellishly expensive to both buy and process.

In fact gone are the days when you had to be slightly less careful shooting because storage space on cards or hard drives was expensive!

These days you can just shoot like a maniac with not a care in the world.

However the potential for disappearing under a sea of video and images is very real.

In fact before you know it, you have no idea what you have, when it was taken and where it is now!

This is one of the reasons why I always consider the library function of any video editing software to be of extreme importance.

Clearly it is not the sexiest of features but it is vital nonetheless.

There does however come a point when even your nicely organized library starts to groan under the strain.

Then before too long you once again find yourself meandering through thousands of clips, images and audio files trying to find what you were looking for.

It is at this point you really need to get organized outside of any other software.

What you really need is an archiving solution that allows you to empty your editing software library and allow you to quickly find what you want.

So in light of that I present the Casey Neistat system for archiving assets. Simple and effective.

Below my usual blurb here there are two videos I have embedded for this week from the one source and on the one topic.

The topic is lighting and although there are many, many lighting tutorials to be found I wanted to include these two for a very specific reason.

These days most people tend to engage in activities at a kind of “tips and tricks” level.

There is an idea that regardless of the activity, all you have to do is check out a couple of “how to” videos on YouTube and you should be good to go.

Of course if you were to discover that your pilot on an international flight had adopted this approach you might then rethink the whole thing but in general that’s where we are.

The outcomes of this superficial understanding is always that the results are never as good as they were imagined and the reason why seems to be something that is getting lost in many parts of life.

In order to really execute an action or display a technical ability there has to be at least some understanding of the basics of what you are doing.

That, unfortunately is an unavoidable fact.

The subject I am referring to here is lighting and in the first video below, the truth of it is laid out pretty clearly.

The camera, or in your case the video camera is NOT the tool you are using.

It is simply the device you are using to record the result of having used the tool.

The tool you ARE using is light.

No light, no picture… simple.

So, in light of that (sorry!) check out the first video then follow the link to the page it comes from.

The creator of the tutorial expands even further on the subject and gives lots of great examples of the theory in application.

Once you have that one under control watch the second video and then again, go to the relevant page and finish up.

I am absolutely sure that if you just sit down and go through these resources diligently you will walk away with a far greater understanding of what you are doing when you are recording light.

So quite obviously the whole 360 degree virtual reality footage and editing thing is the big “thing” of the moment.

As I have said before, the whole subject depends on three different types of technology developing to a point where they are all accessible and then it will really take off.

The first is in the capture of the footage and right now this one is well on the way but still a little expensive.

The second step is in the editing.

This one I would say is just about a done deal.

Most of the consumer level editors can handle it to some degree so by the next round of updates they should all be pretty much on the front foot with it.

The final step is in the distribution and viewing of the material produced.

This one still has a ways to go.

YouTube are offering a 360 view type of experience which is OK but not really what is expected.

Let’s face it what is really expected is a VR experience and this one although not quite there, is pretty damn close.

YouTube have already announced the release of their VR App which can be used in conjunction with the Daydream Viewer so… are we there yet?

Not quite but pretty close!

Color grading is a subject that until recently was rooted in the world of professional video editing only.

The kind of control needed to execute grading as opposed to just simple color corrections was for a long time beyond the reach of the average editing program at the consumer level.

However a few things have occurred over the past two years that have pulled color grading front and center as a tool available to everyone regardless of what editing program they are using.

Magix kind of kicked off the race a few years back when they ported parts of their professional editor, Video ProX over to their consumer product Movie Edit Pro.

Although not a complete replication of the pro level grader it was still much more than anyone else was offering and did a pretty good job.

CyberLink fired back and introduced Color Director which was a standalone yet fully integrated program devoted exclusively to color correction and grading.

Finally came the announcement that DaVinci Resolve was going to offer a totally free fully featured version of their pro post production software and that was about the end of the game as far as all the rest trying to match each other!

Now the problem with having any of these color grading solutions is twofold.

Unfortunately although there are resources around on the subject, they are rarely aimed at the beginner.

So, if this is a subject that you are interested in then my recommendation is to download the free version of DaVinci Resolve and endure the pain of learning yet another video software!

How to Make Money on YouTube with Affiliate Marketing

With the proliferation of YouTube as a video distribution service it would be true to say that a host of opportunities have arisen for making money through it.

It would also be true to say that with the rise of of YouTube there has also been a rise in the number of get rich quick/make a million dollars on YouTube type programs… or scams if we are going to be honest!

Now I can’t individually go through every course or product like that which is on offer at the moment because there thousands of them.

But what I do know is that certain laws of the universe remain true regardless of the internet platform you are dealing with.

So rather than focus on how not to monetize you videos or video channel on YouTube it is a far more rewarding exercise to focus on what you really should be doing.

No, it is not easy and yes, you have work hard at it just like any other activity in which you hope to make some money.

I have previously referred to Tim Schmoyer as a resource to follow in all things Youtube and I am again referring to him on this subject specifically.

There are a number of way to make money with a YouTube presence and Tim covers most of them not just in a factual way but as they can be done in the real world rather than some imaginary universe where you really can get rich quick with the click of the mouse!

This week he covers the subject of affiliate marketing and how it can be done on YouTube.