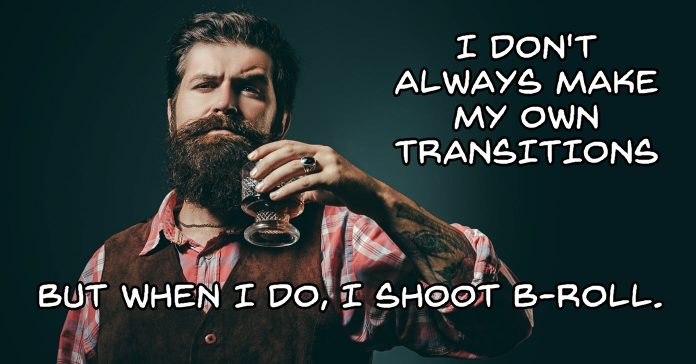 At least once every few weeks I can usually find some kind of resource for the Friday Roundup on the subject of transitions.

I personally think that the reason for this frequency is that the people who generally make tutorial videos aimed at the beginner market live in a permanently disturbed mental state.

Or to put it bluntly, the use of transitions in most editing projects they see just drives them crazy!

As a result they try to take action to rectify the situation.

This week I found this great video that really pulls together two subjects into one with regards to transitions with the other subject being B-roll.

Last week I posted a video that showed a very planned out shooting sequence where specific shots were being captured solely for the purpose of using them in transitions.

Not all of us are necessarily going to be exercising that degree of control over the shooting stage of our video projects.

Sure we can imagine a “reasonable” picture in out minds of how it is all going to play out but very often reality turns out to be something entirely different.

So with that in mind here are some great tips for grabbing some B-roll while you are out and about solely for the purpose of using it for transitions.

Further to and in support of my ongoing war on the use of those cheesy pre-packaged transitions and effects you get with your video editing software, I present to you 3 minutes of hard truth.

Don’t just listen to me! Listen to what the pro’s have to say on the subject!

The video below is a complete walk through of the new Video Masking tool the was added to Pinnacle Studio 23 last week.

Like most video editing software at this level Pinnacle Studio has had the ability to use masks for quite some time now.

However that masking feature was always (like most) restricted to being used only on still images.

Video masking is a whole different kettle of fish and is technically a very advanced feature due to the complexity of applying masks and effects attached to those masks frame after frame after frame.

The video itself does a good job of highlighting the new feature as far as Pinnacle Studio goes but it also does a great job in explaining and showing the differences in application of still image masks and video masks.

Hope for Upscaling Those Old Videos

When I came across this article I have to admit I got a little over-excited about it!

Of course once I read through it my universe kind of calmed down a bit.

What is being discussed here is the development of technology that can upscale existing footage to higher resolutions without loss of quality.

In fact in some cases we are talking about higher quality than the original.

This concept has been a bit of dream for many years now especially for those of us that have been into making videos from back in the days of Standard Definition.

As it turns out the technology they are talking about involves some very sophisticated processes and sadly for us it remains at the very top (read expensive) end of the video world.

Whilst this stuff may not be available to you and I right now the general trend in video is that developments like this eventually make their way down the food chain to us at the bottom.

This is the monthly Q & A session that Filmora put out covering questions sent in by users.

I generally watch these ones when they are posted because very often they show some tips and tricks that many people would like to know about.

These videos are not restricted to questions on Filmora9 or Filmora Pro and they often cover more general topics.

How to Clone and Teleport Yourself! – FilmoraPro

This is a tutorial done in Filmora Pro but the basics of the process remain the same regardless of which video editing software you are using.

Rather than being a tutorial on cloning and “teleporting,” it is really just a lesson in using very common tools.

Those tools are mainly masking and overlays but there is one important point to remember throughout.

The set up for this effect of cloning people in a video or having them disappear is based in the shooting of the necessary clips.

If you haven’t set it all up at the shooting stage and have it all planned out you may find you are unable to get it right when editing.

A particularly interesting video this week from PowerDirector Tutorials on the subject of rendering video files to higher resolutions.

In a wonderful world full of unicorns and sparkles we could all take our Standard Definition video files or our 720p files, output them through our video editing software to 4K video and all would be well!

Unfortunately we don’t have unicorns, sparkles are bad for the environment and rendering to higher resolution just does not work.

The reason for that is that for example in the case of 720p to 1080p, your software has to somehow “invent” millions of extra pixels to somehow to get it up to 1080p.

The only thing it can really do is to try to repeat some of the existing pixels to kind of “fill out” the frame.

Having said that some upscaling is possible without too much degradation if the original footage is high quality and both the original and the target are what we would define as high definition.

So back to the experiment.

In the video below you will see three cameras used to shoot in 1080p and then that footage is converted to 4K at the render stage then uploaded to YouTube.

To get an accurate idea of how it all looks in the end make sure you go into the Video Settings as you watch it on YouTube and select 4K as the play back format.

Some people who create video editing tutorials can be really, really annoying and in the video below you will see one of those people!

However if you can get past the annoyingness (Yes! That’s a word!) of this guy he does in fact make good tutorials.

The software he uses is one of the simplest “fully featured” programs around and that is Filmora (My Review Here).

One of the main reasons I post his stuff is that he shows quite regularly that very often pulling off advanced effects has more to do with what you know and not what software you are using.

Yes it is another annoying yet very effective effects tutorial from Daniel Batal.

Once again he shows that if you just take the time to really learn what your video editor can do a whole world of effects opens up.

In fact I just realized while I was writing this that very often those “advanced” features that people pay extra for in other video editing software are just automated versions of what you can do manually.

CyberLink PowerDirector – How to Use Chroma Key

This is just a simple walk through of accessing and using the basic controls within PowerDirector to pull of the green screen effect.

It is good enough to get you started but remember that good green screen involves careful shooting and use of the fine tuning tools the software offers to dial in the keying effect.

How To Make A Time Freeze – CyberLink PowerDirector 17

This is a great FX video showing how easy it is to achieve an effect like this.

Now don’t be fooled by the title which to some may suggest a simple freeze frame effect.

It is not that effect at all.

The actual effect being shown is a way of having one particular part or subject in the video freeze while the rest of the video retains all of its motion.

It is an excellent effect and when you see it being done you will understand just how simple it really is.

The main limitation is that any remaining motion in the video cannot cross over into the space of the object you have frozen.

PowerDirector – Two Ways to Rotate a Logo or Object

This is a quick exercise in using image objects, key-frames and overlays to rotate the image over existing footage.

As is the case with most video editing software there is nearly always more than one way to skin that cat.