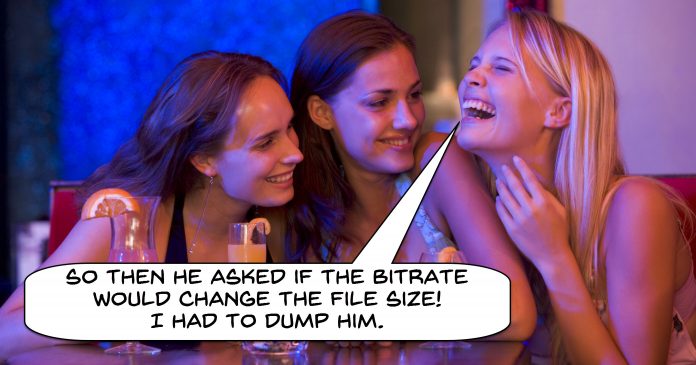 I was having a bit of a moment this week with someone who wrote in to me here for help with his video projects.

The person in question was having trouble getting the quality he wanted from his software for what on the surface seemed to be a pretty straightforward process.

All he was trying to do was to add some images to the timeline, some music in the background and then output it all to a high quality video file he could load onto a USB stick.

The final destination for all of this was the USB to go into a high definition T.V. or disc player and have his montage or slideshow look good.

What could possibly go wrong?

It turned out that the software he was using was about 5 versions out of date and it really brought into focus how much things have changed.

These days when you open just about any video editor the assumption on the part of the editor is that you will be working in HD.

All the choices you can make and the default settings for just about everything are designed that way.

However if, like the guy I was helping, you go back five years it’s like a whole different world!

Neither of us could really understand why there was such a difference in result occurring until he started sending me screenshots of his choices.

It suddenly dawned on me that five years ago the absolute height of video quality was going to be a Blu-ray disc but the most common and the default assumption at that time was a DVD.

So the software was designed pretty much from the point of view of creating a standard definition MPEG2 file to go onto a DVD.

It was when he started going into the MPEG4 settings that all hell broke loose!

Both of us stepping through the same process accepting defaults resulted in his best video being 1.7Mb and mine being closer to 13Mb!

Whilst the codecs being used haven’t changed all that much the assumption of what you are going to be doing with them certainly has.

Five years ago the biggest reason you would be using an MP4 would be to create a tiny file that was easy to transfer over the internet and would look “OK” on a monitor.

These days an MP4 can be used that way but you can make them at far higher quality and still be OK.

Eventually the whole story boiled down to bitrates and how they affect quality and files size regardless of what codec you are using.

So rather fortuitously I came across this video which gives a pretty good rundown on bitrates.

Ignore the type of software being used, it is exactly the same data for any video editing software.

I say it is a strange world because there is always a fine line being walked by the purchasers of that gadgetry.

On one side there is the actual functionality of whatever is being offered and on the other side the rabid marketing that tries to get you to pay for that extra thing, that cool feature, that awesome life you will have if you just upgrade to that higher level… of payment!

The reason I am writing about this here today is because easily the most common questions I get or the most common problems people ask me about have their answer in learning to use what you have better.

Unfortunately there seems to be an increasing reluctance on the part of people to learn their tools and this is probably due in no small part to the way products are presented to us.

Everything says you just push a button and professional results will ensue.

Of course this is the marketing guff I was talking about and is simply not true.

These days it sometime feels like telling someone to just read the manual is committing some sort of heinous crime and that fact that reading the manual is required reveals a complete failure on the part of the manufacturer!

And so the cycle of upgrading or going to the next highest level begins.

That more expensive software or that better camera must be the answer to my problems because when I point and click or point and shoot I don’t get a professional result.

Possibly one of the worst offenders in this area is cameras.

My point and shooter doesn’t give me awesome video so I must need a DSLR.

My DSLR is still disappointing me so I need a bunch lenses and filters and on and on.

But you see none of this is the truth.

The truth is almost always a simplicity and only rarely a complexity.

The truth is that until you know whatever software or equipment you are using inside out, upside down, backwards and sideways you are in no position to judge whether it can or cannot do something you want.

Check out the video below for an absolutely perfect example of this.

What Makes A Good Color Grade?

It is interesting how last week’s latest and greatest, totally awesome feature so quickly fades into the distance as we have our attention placed firmly on the next big thing.

What am I talking about here? Glad you asked!

The “last week’s darling” is color grading and the new kid in town is 360 degree shooting, editing with a view to VR video.

Now I have nothing against the ultimate goal of VR video, that’s just fine for what it is.

What I do sometimes get a little annoyed with is that often truly impactful features like color grading get pushed aside before everyone really gets to appreciate what it is and what it can do.

It is just this relentless marketing push to the “next big thing” results in a rush past those older features without the time to really understand them and more importantly, learn them.

So in an effort to keep color grading alive for just a little longer may I present the video below!

Now while I am on the subject of the video itself there are a couple of things that are quite important in it.

Obviously the first of these is the discussion of color grading which I think quite excellent.

However there is another aspect to it that I think is also important and outside the world of video editing.

That point is the way in which you should approach creating anything that you are eventually going to put up on to the internet.

The internet can be a rich and wonderful collaborative experience and it can also be a very dark place where some of the less attractive aspects of human nature can flourish.

The bottom line is that no matter what you are putting up for inspection by others on the internet you will be open to attack and how you deal with that is a very important matter.

As usual the video below is a pretty straightforward run through of how to achieve an echo effect in the audio of your video project.

The demo is done in CyberLink PowerDirector and although it is simple to do you would probably find it difficult to get to the right place without some guidance.

It is the bane of having a video editor that has lots and lots of features.

You have to tuck them all away somewhere when they are not being used otherwise the interface becomes a nightmare.

The same type of procedure will apply to just about any video editing software featured on this site only the names and the locations of the buttons will be a little different.

Otherwise is is quite simple to do.