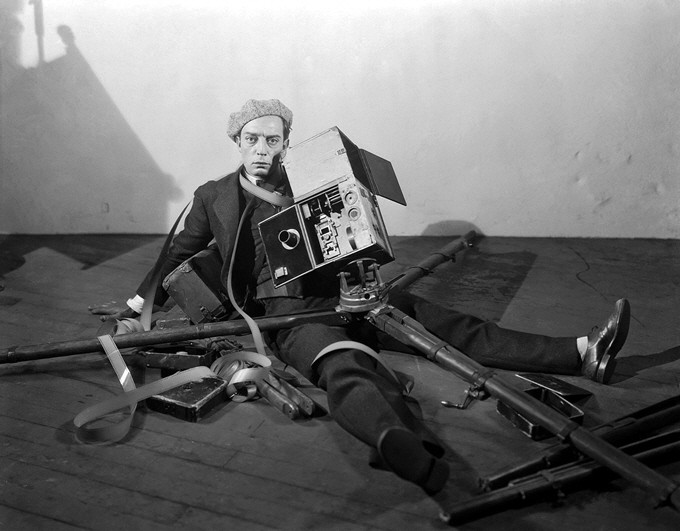 What We Learned from a Master

I noticed this video doing the rounds this week and even though it was featured on a few blogs I wanted to add my own perspective on it.

Years ago when I first saw old silent movies as a kid I never really thought much of them.

To me they just looked silly and amateurish.

Of course probably the main reason for that was that they were being played at the wrong speed and very often set to the wrong cheesy music.

Then one day I saw some of the same old movies played at their correct speed, restored well and accompanied by the music that was originally intended.

It was then that I realized what was achieved in those early days by the pioneers of the movie industry.

Of course everyone would automatically gravitate towards Charlie Chaplin and rightly so because after all he was a master.

But the guy that always got my attention was Buster Keaton.

I could never quite work out what it was about him that attracted me to his work but there always seemed to be something going on that kept my attention.

Many years later I found myself having a bit of a Wes Anderson binge and within his work there have always been acknowledgements to some of the greats of movie making.

However I can remember at some point watching a few of his movies and thinking to myself on many occasions that he had just done something I had seen before but simply could not put my finger on where he got it from.

Well this week I finally got the answer.

The video below is a wonderful exploration of the genius of Buster Keaton and his ability to achieve some amazing things within what was a very technically limited world.

With the release of Magix latest version of movie Edit Pro they have ramped up the abilities of some of the features they have had for a while now.

One of those is their motion tracking module and for those of you who don’t know what that is let me explain.

Motion tracking allows you to find some point in a video which frame by frame is going to be moving around a bit.

Now let’s say you want to have an arrow following that object in the video around.

One way to do it is to frame by frame step through the video with that label you created added to the screen.

Each time the head your are following moves a bit you have to re-position that label.

Motion tracking is a feature that allows you to click on the object you want and have the software track along in real time to follow it AND remember that motion.

Now when you want to attach your label or whatever object you can choose to have it follow the path that the software already worked out for you. Totally painless.

I have covered the subject of green screen quite often on the blog and if you go back through the archives you will find a whole bunch of tutorials and videos on how to do it properly.

Just remember the key to green screen is not in the editing, it is in the shooting and more specifically, the lighting.

Anyway this week I came across an article that I think is very useful for anyone wanting to use some green screen.

It’s all very well to get some green screen footage but if you just put something kind of cheesy in the background that you just created then it kind of lacks any point. Of course you may be going for a cheesy lack of point in which case go for it!

On the other hand you may be doing a green screen for a particular reason and if you don’t pay careful attention to what you are superimposing into that background you may find the results rather disappointing.

In light of that here are some tips for what to use as a background and some of the things you need to be looking at.

OK, let’s be honest here! Whenever I try to post videos on the Friday Roundup they are nearly always some kind of tutorial that can in some way be applied to your home movie making.

Admittedly at times the link between the video contents and the average person editing at home can be a little tenuous but at least I try to make some kind of connection.

In the case of the video below I am not going to even attempt that!

There is absolutely nothing to learn here so let’s not fool ourselves!

This is a video from the slo-mo guys who exclusively make slow motion video of strange things.

Some of their more memorable ones include a super slowed down shot of someone being tasered!

They are just silly!

And so is this week’s video,

YouTube this week announced the addition of a new service to uploaders.

As it stands YouTube will generally serve videos to the audience it feels are best suited to that video.

Very often this means that although they may think a particular video is best suited to a relevant search query or a video would compliment the viewing habits of a user they do not serve those videos because of language difference.

They may have the perfect video for what you want but given that the video is in Russian and you speak English then serving or suggesting that video to you is kind of pointless!

In order to try and break down that barrier they have offered the ability to upload closed captions (subtitles) in other languages for a while now.

However they seem to be getting more serious about it now with a dedicated are being created within the Video Manager for you to specifically add translated CC files.

At present they have really done all that much other than rearrange the area but it does show they are about to get into in a big way.

So much so that they will soon be adding the ability for you to pay for translations of your CC files and right now you can submit your transcript file for a crowd sourced translation.

If YouTube is a place you are operating in or are interested in exploring then you need to take advantage of this feature as it rolls out.

I have mentioned numerous times in the past that the YouTube space can be a great way to get your projects seen but in order to rise above the noise you need to do everything you can to get found.