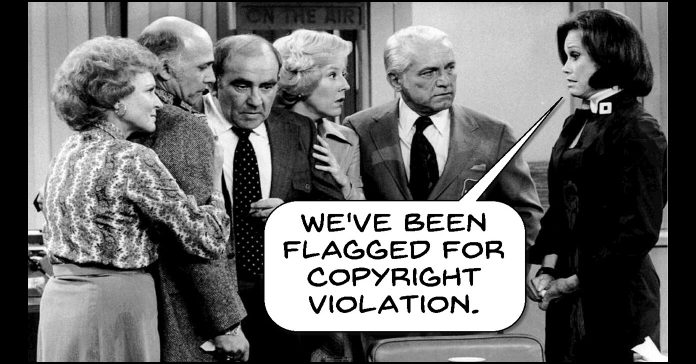 Every now and then there is a little disturbance in the force regarding the fair use of copyrighted material especially by video makers wanting to upload and distribute through YouTube.

The bad news is that this still to some degree remains a grey area and in many cases even if you are OK to use something there is always the possibility you may get flagged anyway.

This situation is probably at its worst when it comes to the use of music.

Because of the way the internet has evolved it is often the service provider that is in danger of being held accountable in the case of a genuine infringement should they fail to remove the offending material in a timely manner.

So when you start to think of a service of such mammoth proportions as say, YouTube then under the current conditions they are wide open to attracting liability very fast.

This inevitably has led to YouTube running an automated solution to the problem that scans all music on all videos on their servers searching for unauthorised use of tracks.

For them it is a manageable system that not only shows good faith on their part in any legal wrangle but also is cost effective.

The downside (as usual) is for the user.

The system is not infallible and it makes mistakes and here is where the points of contention arise.

What they automatically do is flag possible infractions and block them until the user can establish they have permission to use the material.

Very often users only find out about this happening long after it has and they get a little peeved that their perfectly legal video has actually been off the air for days or even weeks.

Personally I have no idea why YouTube don’t just kick out automated emails to the users to let them know they have been flagged but that’s another discussion altogether.

All I can say is that the best defence is to have a clear understanding of what you can and cannot use on your videos from a copyright perspective and make sure you stay well within the lines.

For a full and detailed explanation of the subject and some commonsense guidance check the link below.

Keep in mind that even of you do everything right you may still get flagged so check your YouTube properties regularly and have your defence ready to go at anytime.

OK, last week I covered the changes occurring at YouTube with regards to the separation of Google+ profiles from YouTube Channels and accounts.

The short and the short of that is that as of now new users on YouTube will not have to create a Google+ account in order to gain access to YouTube as a creator and channel owner.

For current users the plan is to eventually make it possible for them to disconnect their YouTube profiles and or Channels from their Google+ profiles.

However it is important to note that this second piece of information has only been discussed and not activated.

If you already have a YouTube Channel or account connected to a Google+ profile then DO NOT disconnect them yet otherwise you will lose your channel.

Anyway last week I gave you most of the ins and outs of it all and my take on the whole thing.

This week Tim over at Video Creators has put up a video covering what he believes to be the ramifications of this move by Google so if you are in any way interested in the whole YouTube thingy you would be well advised to watch Tim’s video for his particular insights.

In the same video he also covers some other upcoming changes to YouTube you may be interested in.

Some Films on Filming Films

Over on Fstoppers this week they have featured a series of instructional videos done by Ryan Connolly in conjunction with Canon outlining a range topics covering shooting video.

There are four videos in total and to some degree because they are done by Ryan Connolly they can at times be a little cheesy but nonetheless they are packed with good information.

Admittedly some of the data may be either a little technical or advanced for the average person there is much to learn here.

They cover choosing the right camera for what you are doing but bear in mind the series was commissioned by Canon so no prizes for guessing what they recommend!

Subjects such as Pre-production may be a little superfluous to most of us but there are some excellent tips on composition, lighting, using the sun effectively and how to use the camera setting to control light.

The final video in the series covers audio both in post and on the actual shoot and there are some great tips on that.