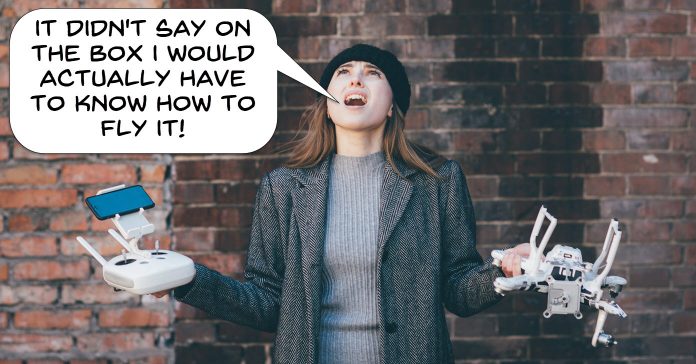 5 Tips To Get Good At Flying Drones

OK I just love this video!

I have often written about the problem with gadgets and technology being that they are sold on a basic false promise.

That promise is that whatever new gadget, plugin, piece of equipment or accessory you buy it is somehow going to bypass the need to do the actions necessary to achieve a professional looking result.

That somehow your video editor is going to automatically create results or that the latest camera is going to create by itself, stunning images.

One of these latest gadgets is drones.

Armed with cameras and lenses that can take astounding shots from amazing locations and angles you too can become an Academy Award winning cinematographer!

The reality is so far from that blurb it is incredible.

Anyone who ever brought a drone, on the first day learned one devastating fact.

If you can’t fly it you are screwed!

In fact I would love to know how many drones there are stuffed away in the back corner of someone’s shed or garage that were taken out for an initial flight, crashed and were never used again!

There are some incredible things you can do with a drone and you really can capture amazing footage but the bottom line is you need to learn how to fly it first!

If you are interested in drones or have already bought one (and it is buried in the garage somewhere) please, check out the video below for an excellent guide to getting up to speed with drones.

Use the Whip Pan in 3 Different Ways

Speaking of Pans… well at least somewhere else this week there is an article on it, here is another demonstration of using the whip pan as a transition.

If you search even further on this week’s Friday Roundup (actually it is the video below this one) you will also find a tutorial for using a “swoosh” audio effect in PowerDirector 16.

In that tutorial the creator uses a simple left to right or right to left slide transition to incorporate the effect.

That same “swooshing” audio effect can be used quite dramatically with a whip pan transition as well.

Anyway here are three uses for a whip pan that you may want to incorporate into your own projects.

This is a quite simple and straightforward demonstration of creating a “swoosh” effect in CyberLink PowerDirector 16.

All you really have to do is line up your clips, add a side swipe transition then position the “swoosh” audio effect at the point of those transitions.

Now from my perspective this is probably one I would classify in the “cheesy” class of transitions but with a little effort you can lift it considerably.

Somewhere else in this week’s Friday Roundup (just above actually) you will find reference to a “Whip Pan” effect which in itself is basically a handmade transition.

If you combine the the whip pan with a swoosh audio effect, then you are making something a little more dynamic.

Pans, Tilts, Booms and Dollies, three camera techniques that even if you can’t pull them off perfectly in an amateur situation, will make you a better cinematographer just by being aware of what they are and what they do.

I personally think that one of the first steps anyone with a video camera can take towards a better looking video is by adding to their understanding not of WHAT to shoot, but HOW to shoot to gain the maximum effect.

An excellent blog post this week form Techsmith on the subject of audio.

It covers a range of subjects from building a sound proof room to choosing the right type of microphone for the job all the way through to some theory of sound itself.

Although the title of this videos would suggest it is directly predominantly at travel style videos I think it offers a lot more than that.

One of the key differences that tends to raise a video above the ordinary happens before you even begin shooting your footage.

This most definitely applies to family vacation style videos or even events being captured on the fly.

The point I am referring to is the simple act of taking in your surroundings before you begin to shoot.

Too often you will see videos that have been somehow stitched together from footage that was sort of frantically shot on the fly in an attempt to get everything possible.

In many of these cases the shooter would have been much better served by putting the camera away at first and simply being in the space and getting located as well as noticing important points.

Most video editing software these days pretty much has to come armed with at least some kind of stabilization module built-in.

High definition footage is breathtakingly unforgiving of even the slightest camera shake or lack of stability.

Video stabilizers have come a long way over the past five or six years offering greater and greater control over tailoring just how the stabilization is applied depending on the nature of the shake in the first place.

In the video below there is a demo of using the stabilizer in CyberLink PowerDirector 16 (Review Here) which offers a good example of how to use them and what results you can expect.

Also bear in mind that as a selling point many software companies these days are including third party plugin pack as part of the deal.

Some of these like NewBlue and Adorage sometimes have their own stabilization effects in the package so it it worth taking a little look through those to see just exactly what you have at your disposal.

With the “dog-eat-dog” competition that is the current state of affairs on YouTube it is now more than ever important to take advantage of every little thing you possibly can to gain attention.

One of the key points to getting that attention and a click on to your video is the thumbnail.

Years ago you had no choice in the matter.

Whatever YouTube pulled as the thumbnail was what you were stuck with.

These days it’s all a bit different and creating your own thumbnail to get that click is not just easy to do, it is a vital point for any YouTube video or Channel.

This is a run through for converting videos files from their original format into video files using the Cineform codec.

The tutorial itself is designed for those using Vegas Pro or Vegas Movie Studio but given how simple it is by just watching it you can get the picture pretty easily.

Not all video editing software programs at the moment will have the Cineform Codec available.

To get around this you can download the codec itself for free (Just Google it) but you will need to go to your local friendly User to User Forum to get help on how to register the Codec with your particular software brand.

The main answer to that apart form the quality of the codec is that it is a codec that was developed with editing in mind.

With H.264 codec footage your computer is engaged in heavy decompression work on top of the editing work you are making it do.

This results in lags, crashes and even out of sync audio in some cases.

Cineform does not require this constant “on the fly” decompression to be happening so it provides a far smoother editing experience with no loss of quality.

Boy, Instagram are really pushing ahead with their video strategy.

Seems like every week there is a new feature or addition announced and this week is no different.

Their original extended video platform “Stories” has now had the ability to add music incorporated into it.