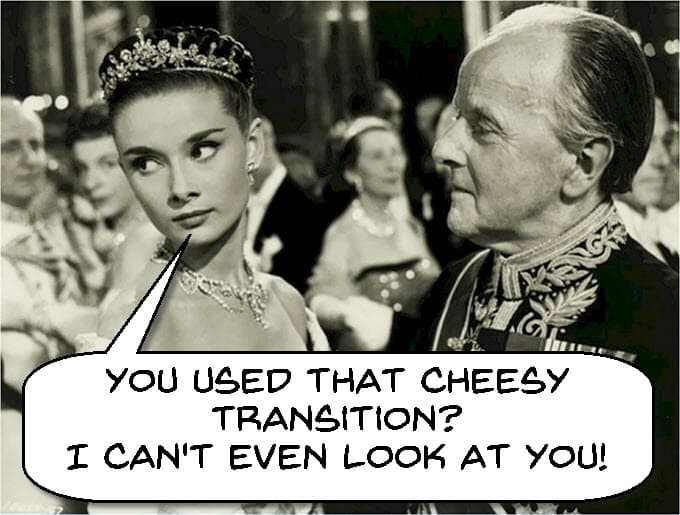 The First Cut is the Deepest

One of the points I try to make in both referring to editing tutorials and even how to choose the right editor is the subject of transitions.

This is one of the easiest ways to sell software for the software companies because they can show you something that moves intricately without you actually having to know anything.

The immediate response for most people when they see transitions isolated is that “wow” factor that ultimately sucks them into a sale.

In addition to that there is always the idea that these transitions are going to somehow bring to life all on their own, an otherwise excruciatingly boring video.

Cos’ you know that’s what Martin Scorsese does right?

Just shoots a bunch of boring shots and then stitches them all together with some canned preset transitions and there you go!

Of course nothing could be further from the truth.

You can take bunch of boring, ill planned footage and intersperse it with a bunch of equally ill conceived, cheesy transitions and all you will end up with is a boring video with cheesy transitions that momentarily distract you from the boring footage!

It is interesting to note that the most common transition is not actually a transition at all.

It’s simply a cut from one shot to the next.

You can actually do an experiment yourself by just watching any professionally produced video footage and taking note of the transitions between every scene.

The point that will very quickly become obvious is that there are hardly any scenes at all where a transition is used.

The interesting thing is that those cuts “seem” to be transitions but they are not… why is that?

Well the answer lies as I say in HOW the cut is achieved.

For a great rundown on way to achieve truly professional cuts take a look at the article linked below and see how a straight cut can be done at least eight different ways to achieve totally different results.

One of the easiest ways to go absolutely nowhere on YouTube is to make an assumption.

That assumption is that you already know what your audience or potential audience want to see or need to see.

In fact this mistake of making an assumption can be applied to just about any video project regardless of what it is or where you intend to show it.

There is nothing wrong with making a video or engaging in a video project that appeals to you or only to you and you close friends or family.

As long as that is your expectation for it then go crazy and do whatever you want!

However if you have any inkling that you want to attract a wider audience or appeal to more than just yourself and those close to you then you have to drop the idea that everyone wants to see what you want to see.

That what you think is interesting will be interesting to everyone. It is simply not true and if there is one factor that separates the successful from the unsuccessful it is this point.

I once saw a great quote about Steven Spielberg that went something like, “He is not a great movie director, he is a great marketer.”

So what does that really mean?

What it really boils down to is that whilst he probably makes movies that appeal to himself the overriding driving force behind the projects he does ultimately bring to fruition are those that he knows will appeal to the widest possible audience.

In the video below Tim from Video Creators explains this concept as it applies to his own YouTube channel and how he fell for exactly that trap of assuming one thing and finding it not to be true.

In the article and video above covering the subject of incorrectly assuming what your audience wants to see Tim Schmoyer mentions the fast that the YouTube Academy is an excellent starting point for anyone wanting to get into video on YouTube.

Below is a link to their site and it really is worth taking a look at.

They have gathered together a wealth of article and videos covering every aspect of creating videos for YouTube and how to organize and build a channel there.

Came across a pretty good curated list this week over on VideoBlocks where they have pulled together a bunch of videos that cover video making from the perspective of raising the game a little.

Now none of these entries are individually aimed at the pro movie maker but fall more into the category of a bunch of great tips to get your projects to a standard that would make them stand out from the crowd.

You can go through them and dismiss any that don’t really apply to what you are doing but I think there is something in there for everyone.

It is important to note though that even if one or more of the references sound like they don’t apply to you they are probably still worth looking at because there is a possibility that they do.

For example the first one, tips for screenwriting may sound a little beyond the average home movie or YouTube clip but in reality the theory of screenwriting and the idea of having a clear story in mind applies to just about any video you make.

So as it is with anything I post here don’t take it all at face value.

Check out the article and always think to yourself how could I use this in my video making.

An often recurring theme on this blog is the subject of video lighting.

It’s a kind of difficult subject to cover at the amateur level without getting too technical or just straight going into overkill on the whole thing.

The reality is that most of us are never really going to be setting lights for a shot.

On the other hand having an awareness of what light is doing to your video and your subjects within those videos is a great advantage.

At its simplest it can just be a matter of noting where the sun is in the sky and positioning yourself in an appropriate place to make sure your subject is not totally washed out by backlight or your own shadow appearing in an awkward way.

The have been many tutorials done on the subject and you can find a bunch of them on YouTube.

Generally they cover one type of setup or one technique in order to keep things simple and digestible.

There was a video put up this week that goes a little beyond the average person’s needs as far as lighting goes but I think it is a great one to watch anyway.

The reason I say this is because the way the guys have put it together is that they are explaining as they go along, what each light is doing and you can see on the screen the result of that addition or subtraction.

Well worth taking a look at, just don’t get too involved in the technical descriptions of the lights themselves, just watch they results of each change.