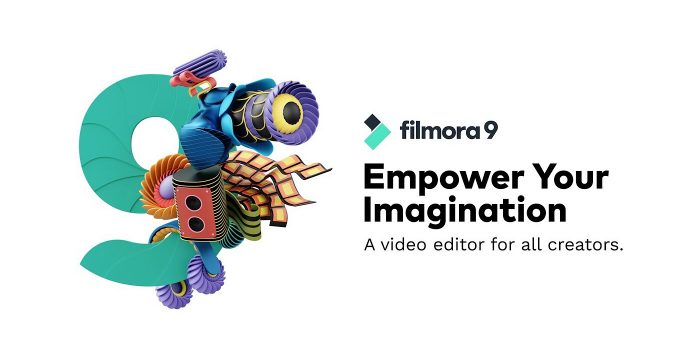 This week the folks at Wondershare release an update to their easy to use video editing software Filmora.

This is a fairly rare occurrence with them as they tend to just keep updating and bug fixing at a somewhat quiet and constant rate without too much fanfare.

This latest release takes us to version 9 of the software and I am happy to report they are still staying true to their basic goal of keeping things very simple.

Filmora is not designed for the editor that wants all the bells and whistles that they most likely will never use!

It comes armed with everything you need for effective and fast editing.

I you haven’t already noticed I have recently begun adding an “Image Credit” at the end of some of my Friday Roundups.

The reason for that is that the nice people at Shutterstock are letting me use any of their royalty free images on this site for free on the understanding that I credit the photographer who created the shot.

Anyhoo, this week I received an email from my contact over at Shutterstock (The lovely Amanda) letting me know about a new area on their site devoted to stock videos and although they have had stock video available for a while, this is something a little different.

The service is called Shutterstock Select and is a growing collection of fully professional stock footage.

And by professional I mean shot by professional cinematographers using cinema grade cameras and lenses all at 4K. So if you are in the market for some high quality B-roll to spruce up those 4K projects it is well worth taking a look at.

It has been a while since I have had one of my little rants on the use of cheesy pre-packaged transitions in amateur projects so… as I always say, (over and over ad nauseum) “There is nothing in the world that will stamp your project as being amateur than by using those transitions!”

One of the most hidden secrets when it comes to transitions is not that most editors create their own depending on the scene they are cutting (which they do) but that easily 50% of the transition is the addition of sound to it.

In fact you can actually take many of those previously mentioned cheesy pre-packaged transitions and almost save them by adding audio effects to them… almost!

So check out the video below on adding audio to transitions for some ideas, then load up a project, choose a cut point, add a transition and play with some different sound effects to see what you can come up with.

How to do the “Super Smooth” Seamless Transition!

So speaking of transitions, which I was or am about to do somewhere else on this week’s Roundup check this video out.

It is a simple yet incredibly effective transition that in itself takes some pretty ordinary footage and makes it into something far more dynamic.

Yes, it is done in Final Cut Pro but that’s totally irrelevant.

Just about any fully loaded video editor at the consumer level has the tools to do this.

One thing you may notice as you go through the process of becoming adept at using your video editing software is that sort of unseen to you, you begin to engage in more and more complex processes.

At the same time more complex projects tend to become somewhat laborious and there is way that this can be avoided.

The key here is in organizing before you begin.

At the very basic level that simply means to get all your assets named and arranged into recognizable folders in your library.

That handles the problem of endlessly searching about for stuff you need.

The second level of this is the sequence and method you use to add assets to the timeline.

Most people start off by adding bits and pieces as they go along the editing process and this is probably OK for very basic projects.

However as your projects become more complex this system just sets you up for disaster… well maybe not disaster but at least for a bunch of frustration!

Check out the article below for an insight into how the pro’s get their timeline sorted before they begin the process of editing.

I am not saying this is the only way or the only way the pro’s do it but it does show how following a logical system can cut down on time spent editing.

How to Make the Parallax Effect in PowerDirector 17

The Parallax Effect is the concept of having a video with separate elements of that video moving at different rates than other parts.

It is a pretty simple effect to achieve in most video editing software but will require access to a reasonable image editing program as well.

Check out how it is done in PowerDirector 17 in the video below but the moves remain the same in any video editor.

PowerDirector – Tips on Blending Clips on the Timeline

If you are using video editing software that offers some kind of “Blend or Blending” effect you may want to take a look at this video.

At a basic level when you have a video on one track and another video on another track in the same time position one will totally overlay the other.

In other words you will only ever see one video.

In most editing software you can have them both appear to some degree by adjusting the transparency on one clip so that they both appear.

However there is a further step you can take in this process called blending whereby the software “blend” the two video tracks to create an effect.

Of course what you can do and how you can do it varies from editor to editor but the this video will give you an idea of what is possible.

PowerDirector – Use the Time Stamp Effect to Create a Countdown Timer

This is a complete run through of all the settings involved in using the Time Stamp effect in PowerDirector.

In most video editing programs there will be a Time Stamp effect offered as standard or they will have one as an add-on from NewBlue FX.