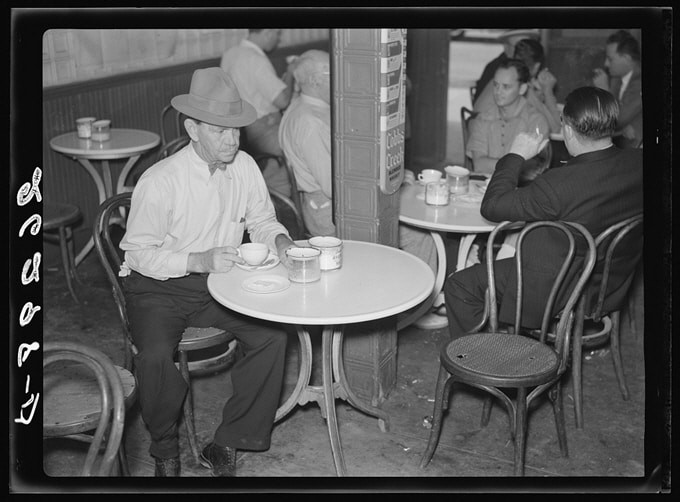 If you are anything like me you are probably on a constant hunt for free images that you can use in your video projects.

There are a number of sites around but getting to them can be a little tricky because search results tend to be overwhelmed by sites that offer “royalty free” images which may or may not be actually free to download or even free to edit to your liking.

Two new resources appeared this week and some of the images they are offering for free are amazing.

The first collection comes from the U.S. Department of Agriculture which on the surface may seem a little bland.

The images themselves were taken by photographers employed by the department during the years of the great depression.

Apparently the original goal was to document the existing and changing land uses of the time given that huge numbers of rural people were being forced off the land or out of small communities into the bigger cities to survive.

Fortunately for us the photographers didn’t just go out and take a bunch of photos of empty fields.

There are all sorts of photos in the collection and most are free to use.

The second collection that came online was from England courtesy of the British Library who have undertaken an enormous volunteer based program to sort and tag over one million images they hold and then upload them to Flickr.

Of the two libraries I would probably not use this one as much as the images are not quite of the same standard but still worth a look.

Intelligent Details: Behind The Scenes

This year Bentley released the new version of their Mulsanne model and in what seems to be becoming a tradition decided once again to get the same team that made their last video create the new release video.

That last video was notable due to the fact that Bentley very cleverly went with the suggestion to create the video exclusively using the then latest iPhone 5’s video recording capabilities.

The result was a slick and polished that was well beyond what most people would have expected possible on a phone camera.

So this year it’s a new car and a new iPhone!

Check out the behind the scenes video below shot exclusively on the new iPhone 6 and 6s and tell me how the reason you are not getting good results is because you need a better camera!

OK I’ll be the first to admit that this next article is a tad on the geeky side of things but it does provide an interesting (if a little technical) insight into things to come.

One of the key components of any digital camera regardless of whether it is for still images or video is the sensor.

And from a consumer point of view one of the most important aspects to consider is that of low light performance.

Now this isn’t because we are all exclusively running around in the middle of the night shooting video.

It’s because the definition of low light in the world of photography or video is something similar to an ordinarily lit room in your house.

The sort of light you get when you are in the living room with the lights on… that’s LOW light.

The problems that occur at that level of light are the introduction of graininess to the captured images and a reduction in the sensor’s ability to reproduce color accurately.

At the top end of the market the recently released Sony a7s II certainly showed that development has come a long way and the low light performance of that camera is pretty remarkable.

However that camera along with many others are using the current batch of CMOS sensors that have been tweaked, reworked, redesigned and generally kicked to death in order to extract the kind of performance we are now seeing.

It is inevitable that at some point there will be a major breakout from that technology into something else just as the CMOS was a break away from the existing sensors of the time.

What this new breakout will be I have no idea but the link below is to an article that may just contain the answer to that question.

I have to confess that the upgrade/update season has left me a little behind on at least one video editing software program that I happen to like.

That program is Magix Movie Edit Pro and I will try to update my review on their latest version soon!

In the meantime I came across a post on their blog that is pretty appropriate to where they seem to have taken their most recent version of their software.

To be honest Magix has always been one of the companies that kept their programs on the leading (bleeding?) knife edge of the available technology.

For a number of years their editor was easily the most feature rich of the better known products but for just as many years I kinda kept them off this site.

The reason for that was that although they certainly put out a product that could do incredible things they did also suffer from some pretty heavy stability issues.

I think it was around 4 or 5 years ago that they finally put the brakes on the whole “features” thing, took a deep breath and finally addressed that problem.

It was around this time that I started recommending the program to readers here.

The difficulty for Magix has always been that although it has a good market share in Europe mostly because of them being based in Germany, they have always lagged behind in the “rest of the world” stakes.

Their latest effort seems to indicate that they are trying to find some kind of market separation from the rest of the pack by tailoring this version of Movie Edit Pro to the youth market with a strong emphasis on the action cam style of videos we are seeing everywhere now.

Whether or not this strategy will pay off in the end is anybody’s guess but what it does mean is that they are tailoring their online content to that market.

The link below goes to a tutorial they posted on some of the more specific techniques you can use to not only shoot video that more accurately encapsulates what should be the excitement in an action cam video but also how to maintain that “action” level in the edit.

There is also a video I found covering some similar concepts for all you action video fans.

10 Tips How to Make a Scooter, BMX, or Skate Edit