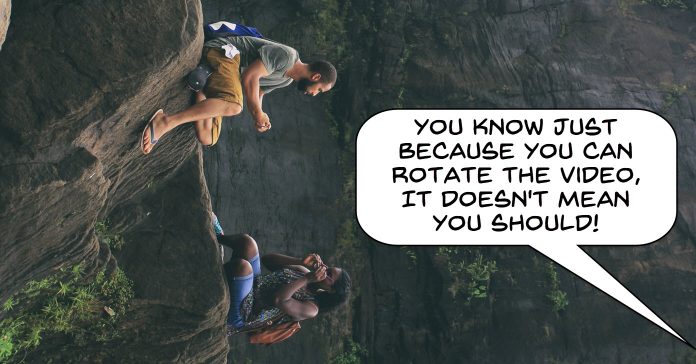 How (and why) to Rotate Video

OK bear with me cos’ I am going somewhere with this!

Let’s face it, rotating a video in just about any modern video editing app could hardly be described as rocket surgery these days so no, I am not that desperate for content this week.

The reason I have included a tutorial video for what would seem to be a pretty straightforward, point and click operation is because in the video below the creator has gone into some detail on where you would use this effect and why.

Turns out that rotating a video simply for the sake of it or just because you can is not really a good reason to do it! Who knew?

Anyway check out the video for some good tips on why you would want to rotate video in the first place.

It seems that the catchphrase “de jour” at the moment is cinematic.

Everything seems to be offering some kind of shortcut or some kind of point and click solution to making videos projects look more cinematic… whatever that really means!

The problem with this is that it hooks into the average amateur movie makers at an emotional level because they want their projects to look better but are uncertain about exactly how to do that.

They look at a full feature movie and can at least identify that their project certainly doesn’t look like that so when presented with the “cinematic” blurb they figure that must be it!

Of course the reality is that the look you see in a full length feature movie is the result of thousand of moving parts at a professional level all working together in order to come up with that “look.”

Any software maker or plugin maker that is promising something similar through the use of their software alone is just marketing, or as I like to put it, lying.

Too often I see newbies and even experienced editor searching around within their software for some kind of filter or setting or transition or whatever to lift the standard of the projects.

However for most the limitations they are facing are not limitations arising from within the software.

What they are hitting is the fact that their original footage is shot in such a way as to make editing it all into something slick pretty much impossible.

So the lesson here is that although you can certainly do a lot of things in today’s batch of video editing software, what you will always have trouble doing is turning dull and unimaginative footage into something exceptional.

The problem lies in the shooting, not the editing.

If you feel that most of your editing time seems to be taken up by actions directed at making it all look better rather than effectively telling the story then perhaps its time to start sharpening your shooting skills and creating better raw material to work with.

Over the past six months or so I have noticed an increasing amount of discussion on this site in the form or questions as well as on various forums with regards to editing 4K footage.

Now I know that 4K has become all the rage because well. it’s 4K so that must be better than full HD right?

I mean it’s more so it must be better!

Well I could probably go on and on about that for a while but instead I wanted to address the problem that many people are having.

It is an entirely different matter as to whether your computer can actually handle it!

4K video files are not just big, that’s only the tip of the iceberg!

What they represent is an enormous workload being placed on the computer and that’s just for playback, forget editing!

So unless you are running an absolute behemoth of a computer and you are or are looking at editing 4K videos you are going to need to work out a strategy for doing that so that you are not plagued by endless freezes, crashes and lags.

At this point in time just about all the mainstream video editors at the consumer level have this problem at least compensated for by having the ability to create lower resolution copies of the 4K files with which to carry out the editing process.

Some call them proxy files, CyberLink calls them Shadow files, the name doesn’t matter because the function is exactly the same.

Once you have completed your project and wish to do the final render, the original 4K files are used to create the 4K project.

Now there are a few downsides to using proxy files that make it very important to get all your ducks in a row before you actually start editing.

So before you even start make sure you have plenty of space on the hard drive and allow some time for the files to finish being copied.

As it stands your choices are to edit in 4K if your computer can handle it or use proxy files if it cannot.

There is one other alternative to all of this and that is to use a file converter to make your own “proxy” files using a dedicated free conversion tool like HandBrake. (Just Google it.)

The value of doing it this way is that HandBrake is a much smaller program in itself and because it is purpose built for conversions, it goes much faster.

On top of that added speed there is a little trick you can employ when doing it this way and to see the full rundown of that, just check out the video below.

The strategy is shown in PowerDirector but it works in any video editing software.

A Roll and B Roll Explained

This video covers the subject of using A roll and B roll shots in your video project.

Now a lot of people kind of tune out when they hear terms like this thinking that perhaps they are referring to projects that would only come in under the “professional” banner but not so my friends!

B roll can be a great way to add a little spice and interest to your projects and once you get the hang of it, it is really easy.

How to Make a Meme

Slightly cheesy video from Filmora this week on making memes as videos, GIFs and images using their software.

Aside from the aforementioned cheesiness the video does cover the techniques need to create memes.

The techniques and concepts being demonstrated are not strictly confined to the Filmora editor and can be easily recreated in most video editing software.