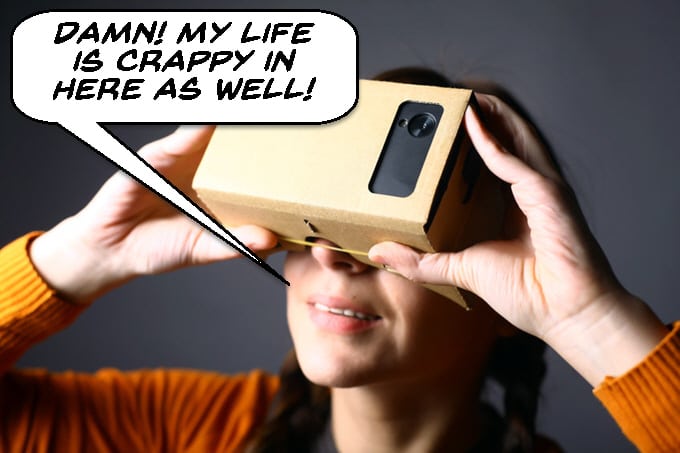 Boy! YouTube or should I say Google really took a huge dump on a few people’s parade this week!

You may have heard of the newly emerging technology of 360 degree video shooting.

There are lot’s of places around the web where you can check it out but essentially it is video footage taken by a special array of cameras that simultaneously capture any scene at all angles at once.

That’s OK for what it is and YouTube recently announced it would be catering to anyone wanting to upload this new type of video.

On top of that most of the better video editing software programs at the moment are either 360 degree ready or will be very soon.

So what’s the big deal?

Well 360 degree footage opens the door to virtual reality videos and up until this week a very small number of commercial outfits figured they kind of had the market cornered on this one.

In order to take advantage of the VR aspect of 360 degree video you need some kind of delivery system so the full VR thingy can be achieved.

Well this week Google announced that not only will YouTube be able to deal with 360 degree video, it is ready now to actually stream it so there is half the problem solved.

With YouTube streaming the videos there is no need for some enclosed system to deliver it.

Then they also announced that the entire system will play through their Cardboard headset so that means it is pretty much game over for anyone wanting to cash in on the early technology / early adopter stage of development.

Think of it this way.

Imagine when CDs were first announced by Sony, instead of paying exorbitant amounts of money to them for both the CDs themselves and an eye wateringly expensive CD players, Panasonic just came along and replaced your entire vinyl collection for free and gave you a player for a couple of bucks!

One of the major feature advances made at the consumer level of video editing in recent years has been the concentration on better color correction tools.

With high definition footage being the order of the day the need to be able to get in and correct color has become more and more important.

Advances in camera technology have also resulted in footage available to the average person that has for more information loaded into it.

This increase in information allows for more aggressive intervention when it comes to the overall “look” of that footage through color correction.

Now the reality is that right now we have well and truly stepped into the world of color grading at this level of the market.

Color grading differs from color correction in that not only does it seek to correct and balance the appearance of the footage but also seeks to apply an overall feel to that footage through the color choices being made.

At the consumer level PowerDirector is clearly out in front with a standalone yet fully integrated module called ColorDirector which allows color grading to occur as a separate process.

Another tool they introduced into that software last year was the ability to use LUTs.

LUT stands for Look Up Table and is basically a set of parameters that can be loaded in one go to the program and applied to footage.

There are thousands of LUTs out there of which some are rather general in their application whilst others are more specific.

Some of the more specialized LUTs are designed for footage from specific cameras like a GoPro shooting at certain settings for example.

So in view of the fact that there are probably a bunch of people out there who actually have the ability to use LUTs but have no idea what they are or how to do it check the video below for a complete run through of what they are, how to use them and what you can expect from them.

I was lucky enough to come across two articles this week, well at least one article and a video both covering the subject of camera angles.

Below this blurb you will see the video from muvee covering angles from their perspective but don’t go expecting too much in the way of advice or information on their use!

Remember, people using muvee are not really getting that much into the process, they just want to simply put a video together and share it at a basic level.

What the video shows quite well are examples of each of the main types of shot and not all of them really qualify as “angles” per se.

They run through rather quickly all the main shots of video from establishing shots right up to extreme closeups.

In fact the only true angle they show is the Dutch Angle which you can see for yourself in the video.

However the one thing they do show very well in putting the video together is the application of the 30 degree rule.

The 30 degree rule in editing is basically that when you make a cut within a scene the viewing angle of the viewer should be changed by at least 30 degrees or more.

This retains interest on the part of the viewer and it is suggested that the reason for this is that to some degree it mimics the way we look at the world naturally.

We tend to scan back and forth around any scene we are in so by applying the 30 degree rule you copy that and the audience feels better about what they are watching.

You can see this in action in the muvee video where they show shot after shot and in those shots that are set in the same place they always change the camera shooting angle by more than 30 degrees.

Now the main article I wanted to share this week was an entire page on the Magix blog that they have dedicated to action cam movies.

As I mentioned last week Magix seem to have decided they want in on the action cam editing market this year and this is the second in their series on editing action cam movies.

Obviously the page is a little weighted towards their own product but I think we can forgive them for that.

This is a far more complete and on topic discussion of angles at work in your shooting and really well worth taking a look at.

They cover a bunch of different shooting angles and also provide a video clip for each one that demonstrates quite clearly how each angle contributes to a particular scene.

Sometimes I come across tutorial videos on YouTube that promise much in the way of content and end up delivering very little.

There seems to be a bit of a trend with some video makers that in order to make their videos engaging they have to try to turn their “personality” up to eleven!

For the majority of these videos I am prepared to suffer through the annoying over enthusiasm to get to the meat of the video.

Unfortunately in most cases I am sadly disappointed and just click away.

I found this video and channel this week and to some degree the presenter does suffer a little from the affected enthusiasm problem but I was relieved to find that if I could just get past that bit the content itself is very good.

After the annoying introduction part it turns out to be an excellent video demonstration of the basic features of CyberLink PowerDirector 14.

It’s all presented in a nice easy paced tutorial that really just wanders through the interface and shows what can be done and how things work.

The video also covers some of the most basic, yet time saving keyboard shortcuts for navigating around the interface and your project and while he is at it shows a few tricks you can do at a basic level with the program.

There is hardly a week goes by on this site that I don’t get at least one question or email regarding handling audio in video projects and by far the most common ones relate to voice overs.

There is a really good reason that Hollywood and all professional video makers have departments entirely dedicated to the subject of sound.

For most people audio always seems to end up as being an afterthought in their projects which is very unfortunate because of all the parts that make up a video, audio is the most difficult to correct and the least forgiving.

You may usually be able to save some poor shots in a video editor or correct the color or whatever but when it comes to audio your chances are slim.

On top of that many people these days are recording screencasts or at least some kind of “How to” style videos and for these the audio is vital.

You can do a great video but if the viewer is straining in any way to hear or understand the audio you will lose them in an instant.

One of the best things you can do if you are making these kinds of videos is to set yourself up with a dedicated space for recording your audio tracks.

That doesn’t mean that you need to build a fully fledged recording studio in the basement.

In fact you can get something very workable very cheaply if you know what you are doing.