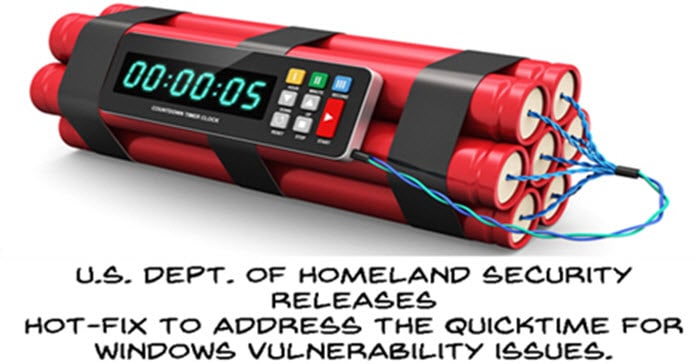 So the big news for this week has to be the announcement by both Trend Micro and the U.S. Department of Homeland Security recommending all QuickTime for Windows users uninstall the app on an immediate basis due to security vulnerabilities.

In fact the vulnerabilities they were talking about were reported to Apple quite a while ago and they did nothing about it.

As is usually the case when a software maker fails to deal with reported security issues within a certain amount of time, Apple were publicly called out on it.

Apple’s response was to announce they were no longer supporting the software and just walked away. Total d*ck move on their part I think!

So in the meantime the fear and panic levels have risen and of course all sorts of related issues have come to the fore given that a number of video editing software suites have at least some dependency on Quicktime to deal with Apple type files.

So in the interests of calming things down a little let’s take a look at the reality of the situation.

Quicktime is a media player similar to Windows Media Player. It is a piece of software designed to play audio, video and image files.

From my research around the web over the past few days I can report that most of he consumer level video editing software programs would be unaffected by uninstalling Quicktime.

The one exception to that is any program that uses Smart Sound Quicktracks for automatically creating background music for projects.

Smart Sound Quicktracks is an independently produced program that relies completely on the presence of Quicktime for it to be able to function.

As far as that company goes I am not sure as yet as to how they are going to move forward because Apple have really screwed them over.

Off the top of my head I know for certain that CyberLink PowerDirector and Corel VideoStudio both incorporate this feature, there may be others.

Let’s also understand that probably one of the worst possible sources of advice on the subject of computer software security is the U.S Department of Homeland Security!

Just about anything they release has an automatic panic button attached.

“Both exploits are remote code execution vulnerabilities that would require an end user to actively visit a malicious webpage or open a malicious file to exploit them.”

Now you need to read that carefully because that is the entire crux of the matter.

The only way the particular vulnerabilities being discussed here can come into play is if you actually go to a malicious site and have Quicktime set so that it is the default player resulting in the malicious code executing.

Or, download an infected file and open it with Quicktime either by choice or because again, Quicktime is the designated default program for that type of file.

So far there have been NO reported cases of this vulnerability being exploited.

Let’s face it, if you are in the habit of going to sites that are security risks or download files from untrusted sources the chances are Quicktime is the least of your worries!

So how can you keep Quicktime and still stay safe?

Open your installation of Quicktime and check which version you have.

Make sure the browser is disabled.

Run a program like CCleaner to clean up any registry entries so when you reinstall it will be nice and clean.

Go to this web address, download and install Quicktime: https://support.apple.com/kb/DL837?locale=en_US

Once installed go into the program and check the preferences to make sure the browser is disabled. (Just in case)

Now create a notepad file on your desktop and re-name the extension to .mov.

Makes sure that Quicktime is not shown as the default program for opening these types of files.

If it is then change it to Windows Media Player or “Movies and TV.”

Close Quicktime and that’s the end of it.

Don’t go to dodgy websites that autoplay video and don’t download video from untrusted sources and you will be fine.

This is not a done deal right now but I am very much looking forward to this story as it unfolds.

The Basic Filmmaker is definitely one of my “go to” sources for tutorials on all manner of video related things.

How To Feel Comfortable and Confident On Camera

These days making a video is a pretty easy task given the accessibility we all have to usable video cameras, affordable editing software and access to online services.

However one particular type of video always seems to present itself as a problem to the average person.

The type of video I am talking about is one where you (or someone else) has to sit or stand in front of the camera and speak to the audience through that camera.

I am sure you have all seen numerous videos on YouTube that are simple excruciating to watch because the presenter looks so totally uncomfortable.

Videos like this are absolutely ineffective because it only take a few seconds of watching before the audience has completely lost the subject of the video and is totally transfixed with the awkwardness of the presenter.

Now before we go any further here I feel full disclosure should be in order.

I never do video with myself actually in front of the camera presenting for this very reason.

I choke something terrible.

In fact even if I am doing a “How to” video and need to record a voiceover it is a terrible experience for me!

I tell myself over and over I can always just go back and do it again if I mess up and that no-one is going to hear my mistakes (or even know about them) because for that to happen I would have to publish the video with the mistakes.

Yet despite there being absolutely no pressure whatsoever, I hit that record button and the world descends into a nightmare!

So, the video below is from some guys who can present quite well to the camera and if you can take a little of their advice and get better then that’s a good thing.

Bear in mind that by far the most successful YouTube Channels are those that have an actual human present on screen and talking to the audience.

If you can get over that hurdle you will be ahead of the pack.

Well the advent of 360 degree video came a little quicker than I thought!

This week VideoBlocks announced they now have a stock collection of 360 degree VR footage available for purchase on a royalty free basis.

Now given that most of us are using consumer grade video editing software this of course really is nothing we can explore at the moment but does go to show how quickly these new technologies are becoming available.

The only software that can handle this type of footage at the moment outside of the big pro suites is Magix Movie Edit Pro 2016 and even then you can’t actually create anything with it.

You can only import it, choose an angle and incorporate it into an existing project.

But I dare say it won’t be long now.

A couple of things I wanted to mention this week regarding the European editing software maker Magix.

First up is that they have released a new version of their pro level program, Video Pro X.

If you are not familiar with it you can take a look at it here on the Video Pro X review page on this site.

In a nutshell it is a fully professional editing suite comparable with Sony Vegas or Adobe Premiere Pro but with the advantage of having nowhere near the price tag!

The cheapest of the pro programs at that level is Sony Vegas which starts at around the $400 mark for the basic editing package and not much more.

Video Pro X also comes in at $400 but with VideoPro X you get everything and the kitchen sink.

To get the same amount of stuff in the Sony product you need to start looking at around $800.

So if you are thinking of moving to a fully pro editor without the eye watering price tag then it is well worth a look at.

With the announcement of the new release of Video Pro X Magix also announced another rather interesting thing.

This new version is the first version of that software that has no version number or definition.

Technically it should be Video Pro X8 but actually it has been titled just simply Video Pro X.

The reason for this is that they are ending the old perpetual license model they, and most other software makers have been working on for years now.

Instead of yearly updates to a new iteration of the software, they are selling it at a fixed price for the first year which includes all updates for that year.

Once that year has finished the software remains usable but you can’t continue to access any updates.

To do that you need to pay for an extra year.

Obviously that extension of support beyond the first year will be at a discounted rate to keep the package attractive.

Magix have said they will be rolling this new model out to all their software products over the coming year so it will be interesting to see how, as a business model, it works.

Magix are not the only ones to be exploring this option.

Muvee announced recently that the latest release of the semi-automatic editing software, Reveal was not going to be carrying a version number but instead has been dubbed muvee Finale.

They have said it will be the final version of the software but intend to keep updating it actively as formats, operating systems etc. evolve over time.

CyberLink have also introduced a secondary licensing method outside of a straight perpetual license fee similar to the new Magix one involving a yearly subscription entitling the user to all new updates over that period.

The software remains fully functional at the end of the license period but all updates cease at that point.