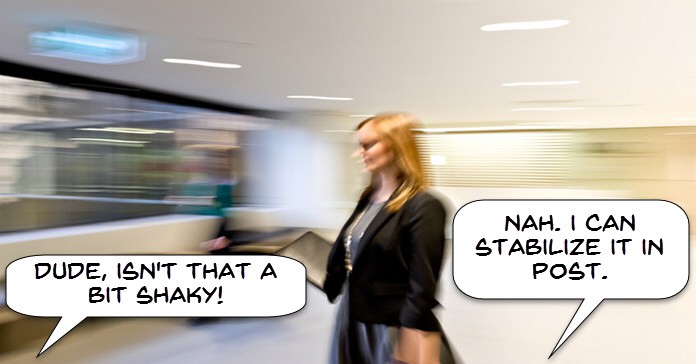 Video stabilization is on feature of video editing software that has been around for a while yet over the past few years has seen an increasing demand from people buying that software.

That increased demand can easily be put down to the fact that people are shooting more and more shaky video as time goes by but the question is why.

Why is it that all of a sudden our videos have become so inherently shaky that this feature has become so elevated in the minds of the buyer?

The answer to that comes down to two main factors.

A slightly out of focus standard definition shot still looked ok when played back on a DVD or online.

A slightly out of focus HD clip looks awful no matter how you look at it.

The same goes for camera shake.

A little shake in SD doesn’t really distract the audience too much but the same amount of shake in high definition can be bad enough to have the audience puking in the aisles if the screen is big enough!

So that’s the first reason video stabilizers have become such and in demand feature.

The second reason is a little more subtle and has to do with the way we are shooting our videos.

If you go back to the dark old days of standard definition again you will find that just about all video that was eventually seen by an audience of any kind was shot on a camcorder or dedicated video camera.

No-one really used phones or even still cameras to shoot video because quite simply the quality was so bad and the resolution so small that it was virtually useless.

The only way to get any decent quality was at the very least to use a consumer level camcorder and because of that you pretty well had to use the viewfinder on that camcorder.

Flip out screens came later but even then people still tended to use the viewfinder because that’s what they were used to.

Now the viewfinder itself was no sure path to steady video but what it did force was a shooting technique far more suited to getting steady footage.

You had to hold the camera to your face in position otherwise you wouldn’t be able to see what you were shooting.

This in turn meant that you had to keep your elbows tucked in to your body to keep the camera positioned correctly with the final result being much steadier footage.

The most common shooting devices are either phones or still cameras and invariably they have a large screen facing the shooter with which to frame what is being shot.

That means you have the device positioned away from your body, arms outstretched in front of you.

This results in both the arm movement caused by that position and any body movement getting added together in a sort of compounding way to make camera shake almost inevitable.

The end product of all of this is that the average person, instead of trying to correct the situation at the shooting stage, figures they can correct it at the post production stage.

Unfortunately even though stabilization modules have made great advances, you can’t fix everything and usually anything you do fix comes at a price.

That price is most commonly degradation in the quality of the image due to the enormous recalculations that have to go on to achieve the stabilizing effect.

We all get lured into ways of thinking about what is possible and what is not possible in many fields by the marketing that goes along with whatever it is we are doing.

Software is probably one of the worst offenders when it comes to this.

When the market research department for a video editing software maker sees there is a demand for video stabilization a call goes to the R&D guys to get onto it.

The R&D guys come up with something but are restricted by both budget and available technology.

In other words there is only so much they can do!

The marketing department then goes hog wild extolling the virtues of their new product but the reality is it can only do what it can do!

The consumer sees this marketing and figures it is the answer to his dreams and to some degree it is, but that same consumer is still only fixing a problem that didn’t really need to have occurred in the first place.

When the marketing says you can fix your errors in the software “just like the pro’s” it is a lie!

The “pro’s” never intentionally get themselves into the position where they need to correct basic shooting errors in the first place.

So the answer to all of this is quite simple.

Failing that, be the Meryl Streep of video shooting and BE the tripod!

Tuck your elbows into your sides so that any time you are following the action you follow with your whole body, not with your arms flapping around and your body following!

If possible stabilize yourself against something like a wall or a lamppost or a car or anything available.

How to get rid of Black Bars

One problem that arises quite often for some people is that of mismatched frame sizes within a video project.

By this I mean you want to create a video project at a particular resolution but need to include footage that has been recorded at a different resolution than that of the project.

This is especially true when trying to mix standard 4:3 aspect ratio footage in a wide screen project or when adding game play footage recorded at an uncommon resolution or aspect ratio.

Now the easy fix in cases such as this is if the added footage is actually larger than the project.

In this case it is simple a matter of downsizing that footage to the project size or just cropping it to fit.

The reverse situation where the added footage is at a different aspect ration or a lower resolution is not so simple.

The most down and dirty way of doing it is to simply stretch the footage to fit the new size but this always ends with the footage being either distorted or suffering from a loss of quality or both.

In the video below the user gives a quite simple solution to the problem by adding a layer behind the smaller footage that blends in without distracting and to me is quite a good low tech trade off to deal with this situation.

This is the second in a series of article written over on the Premiumbeat blog loosely covering the subject of video parameters.

This week they tackle frame rates giving an interesting insight into the background stories that led us to the frame rates we have today.

They also go into the differing effects frame rates can have on audience perception both in the shooting of the footage and the playback.

The article itself leans a little more towards the movie frame rate aspect of things rather than what we would call the video side of things but it is an interesting read all the same.