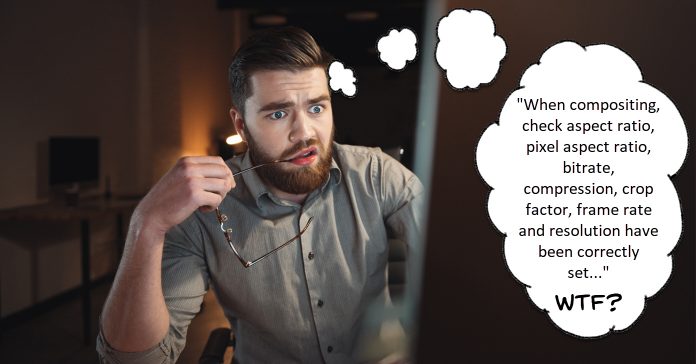 The article linked below is not actually part of the recent blog series produced by NewBlueFX on the subject of video shooting and editing that you will find further down the page.

However I think it is important to check it out as part of the series for one very often overlooked reason.

One of the easiest ways to get lost in a subject or lose track of what you are reading is by failing to understand the terminology being used.

We have a tendency as humans to kind of scan past specialized terminology in the hopes that somehow later we will get the gist of it all.

In fact if you keep doing it repeatedly in the same subject you very often end up telling yourself you weren’t interested in it to begin with.

So before you get into the NewBlueFX tutorials, take a little time to get a working knowledge of some common video shooting and editing terms.

For most of us shooting video in just about all circumstance is going to involve two key factors.

The first is that we are most likely shooting on a handheld device like a smartphone or some kind of video camera/camcorder that comes in at the consumer end of the market.

The second factor is that we are going to be shooting using available light.

I don’t know about you but the last time I went on holidays I wasn’t too keen on lugging a full lighting rig around!

These two factors have an enormous impact on the quality of the footage we are going to get because both of them combined together add up to problems with light.

The average consumer level video recording device regardless of its form has as its main drawback poor performance in low light or in extreme lighting situations.

Before we go any further let’s just take a look at what I mean by that.

The definition of low light would be the level of lighting you get in a normal living room with all the lights on.

Extreme lighting would be the conditions presented on a perfectly sunny day!

It is considered to be extreme because although there is plenty of light, it is all coming from one direction or source so will be playing havoc with shadows and surfaces directly being hit with that light.

So from that you can see that most of the time you and I are shooting in non optimum lighting conditions.

That’s why you may have seen a professional video shoot occurring outdoors on a sunny day yet they have an enormous bank of extra lighting being used as well.

In that case they are adding to the existing light so as to be able to control it.

Anyway, back to the cameras.

Under any lighting situation that could be described as either low light or extreme light the quality of the images you are going to get will be greatly degraded.

Of course in recent years there have been advances in the ability of the software running the device to compensate for these things but they are far from perfect.

The other problem that occurs for us amateurs is that imperfect lighting conditions make it very difficult for the automatic focus on these devices to isolate objects and set the focus correctly.

Maintaining focus on a moving object or objects or while the camera operator is moving adds even more difficulty to the task.

So now that we understand that its all pretty much impossible what’s the solution?

Well there are actually steps you can take to minimize or even eliminate these problems.

The first is to gain a knowledge of how natural lighting works and how to shoot within the limitations of that light.

Check out the video below for some excellent tips on using natural light to your advantage.

This week NewBlueFX started a video tutorial series on their blog in which they will be covering some of the basics of shooting and editing.

If you are unfamiliar with NewBlueFX they are a company that creates filters, effects and titling modules for video editors.

Most of their products are plugins that can be added to an existing video editing program.

In fact many of the most familiar video editors like VideoStudio, Pinnacle and PowerDirector come with NewBlueFX already loaded as part of the purchase.

I have had a chance to follow the first few entries in the tutorial series they are producing and it looks to be worth checking out.

The links below are to the first few article in the series so if you are interested you can go over to their site and follow along as they release new ones.

I will probably be tracking along with them and adding any new one to the Friday Roundup each week.

Using copyrighted materials can be a bit of a nightmare if you don’t know the basics.

The video below only covers those basics but in an easy to understand format.

Bear in mind that these days the most common form of showing your video to someone else is by using some kind of social media platform so once you do that you are open to dispute.

So make sure you are standing on solid ground before you upload content that uses other peoples assets.

A Few Words on Shot Length

If you have ever watched the average “home movie” produced by an amateur video maker there is a phenomenon that generally occurs very quickly.

Unless the video is of someone speaking or is of people you are intimately connected to, a sense of boredom or impatience soon sets in.

It may very well be that you have an interest in the subject matter but despite that, there is an internal “get on with it” conversation beginning to arise.

The cause of this can be put down to a number of things but one of the main ones is the length of the shots you are presenting.

If you just take note for a few minutes in general life about how you are perceiving the world one thing becomes clear.

You are usually not fixing on one thing for very long before you flick to the next and then the next.

Humans tend to scan around the people they are with or their surroundings on a very regular basis.

Even in a simple conversation with another person whilst you may be paying full attention to that conversation, your attention and view will flick around all over the place.

From face to table to object on the table back to face to eyes to mouth to clothes on and on.

This is how we naturally “see” the world and what is going on in it.

When you create a video that has long extended shots that change only occasionally the viewer very quickly becomes uncomfortable because his or her attention is being directed in an unnatural way.

That’s why, if you look at any TV show or movie, the length of the shots is very short on average and through that they hold attention by mimicking natural behavior.

How long for a shot on average?

Check out the article below for an analysis of shot lengths for a David Fincher movie.

They are surprisingly short!

Must Have Filmmaking Accessories for iPhones & Androids

Over the past few weeks I have included a few articles and videos on the subject of learning to use whatever video shooting or editing equipment you have to complete you projects.

It always bears repeating that the best editing software for you and the best camera for you is the one you have!

Here’s a video going through a few little toys you might want to look into if you are using an iPhone or Android device to shoot videos rather than buying a whole new setup.

The two videos below are demonstrations in both CyberLink PowerDirector and Pinnacle Studio on how to create the “Annoying Orange” effect used by the popular and aptly named YouTube channel.

Regardless of whether or not you actually want to recreate the Annoying Orange effect, the videos themselves are great tutorials on the subject of using masks.

Not only do they cover how to create and add masks but also offer a wealth of information on how to manipulate them within your projects and how to take advantage of the fine control you can exercise over them.

Lower Thirds are either static or animated graphics that appear in the lower third of the screen of any video.

We have all seen them on news broadcasts where there is an endless stream of text scrolling across the screen.

The article below from Techsmith gives some excellent rules of using lower thirds to add value to your video productions.