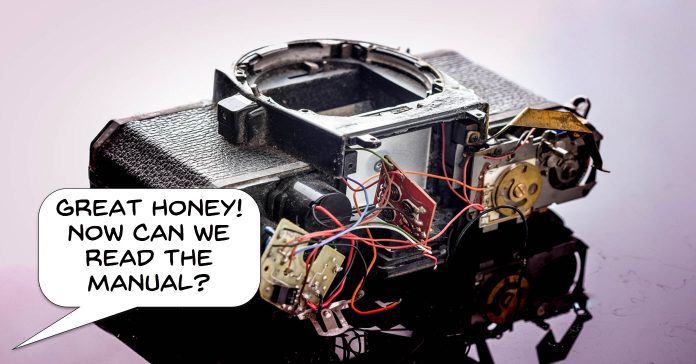 10 Things To Do When You Get A New Camera

In my house I am considered to be a bit weird by my wife and son.

Whenever we purchase some new device, appliance or piece of technology the very first thing I do is unpack it and read the manual.

Then I re-read the manual with the object in question in my hands or at hand.

It is only then that I begin to set up said device for use… according to the manual.

My wife and son on the other hand just want to dive right in and start using whatever it is instantly.

The usual result of the “dive right in” approach is that eventually they “eat crow” and come and ask me how to make it work or set it up or whatever.

At that point I never fail to mercilessly rub in the fact they they didn’t read the manual which gives me no end of pleasure and smug self satisfaction.

When it comes to cameras I think this is especially important and feel that at the very least the following four steps should be done before the rubber hits the road:

Maybe watch this video instead.

OK so kicking around somewhere else in this week’s Friday Roundup is a video on using B-roll footage in your projects.

If I was anywhere near organized I would have a link to that article on this post RIGHT HERE.

However I am clearly not that organized so you will have to just take my word for it… it’s somewhere around here.

Anyway just after I added that video to the post I came across this video from Justin Odisho.

He is a YouTube creator that I often refer to here because of his usually excellent tips and demos on video making.

This week he has not just posted a video but has uploaded about 1 Gig of free B-roll footage that you can use in your projects.

All he is asking is that you credit him if you use the footage in any online situation which I think is pretty fair and the right thing to do.

How to do B-roll

The current catchphrase in the world of consumer video editing is “cinematic.”

Use this LUT to get cinematic results, use that format for more cinematic footage, cinematic frame rates, cinematic aspect ratios, plugins, settings and on and on.

Basically what cinematic is referring to is the concept of professionalism and creating something “cinematic” is not going to happen by using a few presets in an editing program.

A cinematic look is achieved through the use of a vast number of factors from pre-shooting all the way through to the end.

One of those factors is the use of B-roll footage in the editing process and the video below goes into some detail on how to shoot it, why you use it and how to incorporate it in the final edit.

B-roll effectively shot and used will NOT result in your latest production being “cinematic!” It will make it better though!

Tips & Tricks – Be One With The Monopod

You don’t have to be a genius to work out the fact that although high definition video at the amateur level has been a great leap forward, there is one glaring downside.

Any unwanted or unnecessary motion which occurs at the point of shooting gets completely amplified at the point you play it back!

There are numerous solutions to the old camera shake problem beginning with tripods and going all the way through to gimbals and other stabilization equipment.

The monopod is one tool that very often gets overlooked and with a little practice can work wonders for stabilizing your shots.

The 5 Dos and Don’ts of Slow Motion Filmmaking

This is an excellent rundown on the subject of using slow motion footage in video projects.

A common problem encountered by people who really don’t understand the slow motion process fully is that they see huge degradation in their footage when slowed down.

This comes from rather a simple cause but is often overlooked.

If you have 10 seconds of footage shot at 30 frames per second then you have a total of 300 frames of footage.

When you slow that footage down by say 50% you now have 20 seconds of footage but you still only have the original 300 hundred frames you started with.

The software can’t just “create” another 300 frames from somewhere!

All it is actually doing is displaying each frame on the screen for twice as long.

Inevitably this will lead to degradation and it will be most noticeable in the area of the smoothness of motion.

So although you can get away with a little application of slow motion, there are limits to just how far you can take it…. UNLESS!

You knew you were going to go for slow motion when you were shooting and increased the frame rate at which the footage was being shot.

How to add MOTION BLUR to your Footage and Animations

Just about every editing software package at the consumer level will have some kind of access to the motion blur effect.

For many people this may be the first you ever heard about it!

For many others you have probably stumbled across it either as an effect offered by the software or as part of an effects plugin like NewBlue FX… but still you kind of wandered past it anyway.

So check out the video below for an introduction to motion blur, what it is, how to use it and more importantly when you can use it effectively.

This week on the blog there are two tutorials on the subject of zoom transitions and how to do them.

The one below is the slightly more technical version and is shown being done in HitFilm Express.

The reason for it being a little more technical is due to the fact that the shots being used to achieve the transition were captured with that purpose in mind.

Easily the most effective way to accomplish a perfect zoom transition is by knowing at the point you are shooting that you will be doing that.

The other point to take note of is that the demo is being done in HitFilm but as usual the type or brand of software being used is pretty much irrelevant.

The same functions exist in just about all video editing software albeit perhaps under a different name.

So moving on, this version of the transition is demo’ed using Filmora which is quite a simple video editor when compared to most.

However it does illustrate the point that you don’t necessarily have to fork out big bucks for all the bells and whistles to generate sophisticated results.

More often than not it comes down to what the editor knows rather than what editing software he or she is using.

In the other tutorial in this week’s post the creation of the effect is shown as being approached from the shooting stage all the way through to the editing stage.

Essentially this kind of suggests that in order to do the zoom effect you have to have it all pre-planned from the beginning.

Whilst it is usually true that any project that has been shot with editing in mind will ultimately be easier to deal with in the editing stage, that doesn’t mean your hands are tied completely.

Whilst this demo is a more simplified version it has the advantage of being easy to do and still gets a good result.

The original idea of jump cuts was as a rule of editing that you were never supposed to break.

So the rule is that whenever you make a cut within a scene the camera angle must change by at least 30 degrees or more to retain a more natural feel for the audience.

Of course like all great rules someone had to come along and break it in a way that created a cool effect!

Then along came YouTube videos and suddenly jump cuts were all the rage!

Whilst it is true that modern audiences are now quite used to jump cuts they don’t necessarily have to look like you took an ax to some film stock and went crazy! Check out the video below on how to put together a jump cut to get the effect they can offer.

In a nutshell the current state of affairs within the world of social media video is changing quite rapidly with one platform emerging as the “go to” place for that type of interaction.

Facebook has been losing traction for a while now (although it is still huge!) on two fronts.

First the ongoing security and data retention controversies and secondly, it’s just not where the cool kids are hanging out anymore!

Twitter has it’s own problems with trying to control the haters and trolls.

YouTube may still be the biggest and baddest of them all but their recent changes in demonetizing vast numbers of channels haven’t really won them too many friends.

The one service that is beginning to stand out amongst them all is Instagram so if you are interested in distributing your videos online, Instagram may be the one to take a look at.

They are currently displaying short videos on both the timeline and as “Stories” and are also making noises about increasing the length of acceptable videos beyond the current 60 second limit.

Like all the social media platforms there are certain parameters you need to produce you videos at to have them display correctly.

The two articles linked below should keep you covered with all things relating to video for Instagram.

It is no big news these days that YouTube have done a quite extensive clean up of their platform with the removal of many low quality accounts and channels as well as demonetizing numerous low traffic ones.

For many people just starting out this has been quite a blow with the hope that they would make just a little money while they were building their audience being suddenly taken away.

One of the sources I tend to go to for balanced YouTube information is Derral Eves.

He has a subscriber base of 500,000 or so people and is very often the voice of reason whenever the excrement hits the rotary oscillator over there on YouTube.

This week he announced what may be a viable alternative to generating income while a person tries to build a YouTube Channel into something big enough to make money.

At the time I mentioned it they also released a video highlighting the new features… which for some reason then disappeared!

Perhaps I should have watched it more closely as there may have been some horrendous corporate screw up in it that I missed. Doh!

Anyway here is the new one and you can see my review of Video Pro X HERE.

This is a quick run through of the Magic Music tool offered by CyberLink PowerDirector.

Most of the current batch of video editing software at this level have some kind of automated system for creating background music at a length that matches the project.

This one is no different.

They are all quite handy to use but remember, it’s background music so don’t expect to be singing along in the car to any of this stuff!