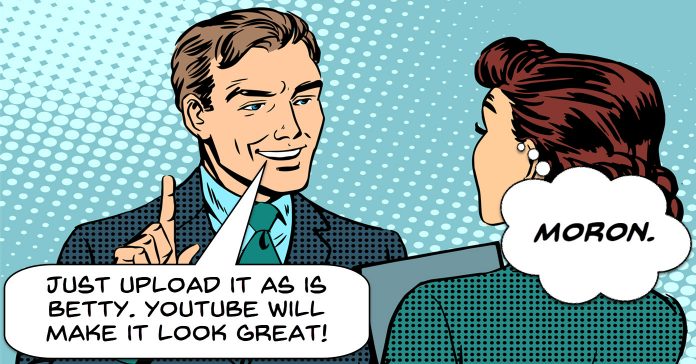 Learn How to Properly Compress Your Footage

One point that seems to come up quite often around the traps is how to maintain image quality when uploading to services like YouTube and Instagram.

In order to really be able to do that you have to understand at least some part of the process your videos are going through before they appear in playback on your screen or someone else’s.

Of course there are guidelines published by those services as far as best practices go but inevitably you will come across some videos that will look way better than yours and there seems to be no reason!

So let’s go through a few points to consider.

The first of these is that no matter how high the quality of your video in terms of resolution or whatever, YouTube and even more so Instagram will re-render or re-process your video.

The problem for you with this is that any time digital video files are re-rendered to even the slightest change in one of the parameters of that video, there will be image degradation.

The only thing you can do to minimize this is to upload at the best possible set of parameters you can.

Notice there I said “minimize” and not stop or avoid!

Also bear in mind that when YouTube re-renders your video they will do it a number of times.

They will re-render to a version the same as your original plus they will render to a few lower resolution/lower bitrate versions as well.

This brings us to the second point to keep in mind.

When you or anyone else is viewing a video on YouTube you or they may now not be seeing the absolute “best one.”

YouTube will test your internet connection and select the version that they think will offer the best quality for your connection speed.

So the general rule still applies that you should upload to the highest possible quality you can but bear in mind play back after re-rendering may not look as good.

So how to the pro’s get even better quality?

For all of that check out the video below to get an idea of the steps they take to get their videos looking as best they can.

One of the best ways to add interest to any average video project is by the use of what is called b-roll footage.

At a fully professional level b-roll footage is generally shot by a separate team with a plan already in place of what will be needed in the final production.

It is probably for this reason that a lot of amateur video makers don’t really include b-roll as part of what they are doing or at least think of shots in terms of b-roll.

Think of a family excursion to the beach with the kids.

Any shots you take of the kids playing in the sand or in the water is a-roll and that’s usually where the shooting for the day finishes.

Endless shots of the kids playing at the beach.

While that in itself is OK, it can get kind of boring pretty fast… unless of course you are a grandparent in which case it’s perfect!

If at the same time you took some more general shots of the beach itself, the surf or perhaps the surrounding landscape then that would be b-roll.

Used wisely that b-roll can make the entire video far more interesting to the viewer.

In the video below, which is for another purpose entirely, there are some good tips on how to take in those surroundings and work out what may make good b-roll for your next project.

One of the most basic shot sequences you can use in any project is the wide shot (establishment shot), medium, medium, close up pattern.

The wide shot lets the viewer know we they are, the medium shows that were are still in the same time/place but shows what the viewer should be looking at within the scene.

Another medium shot confirms everything shown so far and reinforces from another angle the concentration on the subject and finally the close up takes us all the way to the subject.

It is sort of a “meat and potatoes” sequence that works very effectively.

However just like generic meat and potatoes the audience can get a bit sick of it if it is served up over and over again!

One very effective way of breaking that sequence whilst at the same time holding attention is the use of the Insert Shot.

Check out the video below for some great examples of its use.

One of the first rules of shooting video you will most likely come across that has its root firmly planted in photography is the rule of thirds.

That’s the concept of the frame being broken into 9 separate areas by 4 lines with the idea being that you place subjects or points of interest at the intersections of those lines.

You can read about the Rule of Thirds more here.

Anyway, if you learn that rule well then you understand that what you are not supposed to be doing is planting your subject smack dab in the middle of the frame right?

Well like all rules in video they were meant to be broken!

If you take a look at any Wes Anderson movie you will see that he uses subjects precisely in the center of the frame all the time and to great effect.

Check out the video below to get an idea of how centering your subject can be used to create an effect.

Sunny Lenaduzzi is one of the people I tend to keep track of when it comes to tips on YouTube and other social media platforms like Instagram.

In this video she covers the entire process she goes through in order to post to Instagram and to build her audience.

This week and last there has been a lot of discussion around the internets on the subject of the new DJI Osmo Action Camera.

Most of it has been very, very positive especially with regards to the image stabilization feature called Rock Steady.

All of the footage I have seen produced by this cam using that stabilization has been very impressive.

However being an action cam it is supposed to do others things and have other features!

In the video below Kevin from the Basic Filmmaker does a full 30 minute or so video covering a whole bunch of features that he likes and dislikes about the cam on top of just the stabilization.

I think it is worth watching to get a better overall view of the cam.

This is a fairly simple tutorial on adjusting your drone shots in post production and although done in Premiere Pro CC the effects can be done in any editor.

None of these effects are difficult or advanced in any way.

The real value in the demos in my opinion is that it shows how just some very minimal adjustments tastefully applied can lift some shots way beyond what they were originally.

Let’s face it, all it is showing is a guy adding some zoom effects and a bit of rotation but the results are very effective.

How to Film a Travel Video – Filmora9 Travel Vlog Series

Last week in this series from Filmora they covered the need to have a plan for shooting any kind of travel style video.

In reality that applies to just about any video project.

This week in the series the guys at Filmora cover in great detail the kinds of equipment you may want to use plus some excellent tips on different types of cameras and lens.

This is the third video in the Travel Vlog series from Filmora and it is pretty comprehensive.

Up until this one they have covered planning your shots, some great tips on equipment you will need and executing your shot plan.

In the video below they cover what to do once you have all of your footage on to your computer and are ready to begin editing.

It really is a very good run through of an effective sequence of editing covering vital points such as getting organized before you begin the edit.

As is the case with all of the videos in this series there is almost nothing in them that are exclusive to the use of the Filmora9 video editor.

They are all just general tips and guides for travel vlogging and in fact most of the tips can be applied to just about any kind of video project.

PowerDirector – Place Videos Like Pages in a Book – Part 1

This is quite a detailed run through of a technique in PowerDirector 17.

The idea is that against a background of a book you have videos playing as if they were the pages in that book.

Then at certain intervals you have an effect that makes it seem that the pages of the book are turning and the video behaves as if it were the page itself.

It is quite a complex effect to achieve requiring a lot of fiddling about to get it all looking good.

Unlike most of these effects type tutorials that I include each week this one may be confined to PowerDirector only.

I know that most video editing software can probably do this easily but because it involves many steps and many features within the software it may take some working out to accomplish.

The tutorial is in two parts (I told you it was complex!) with the top video below being the first.

PowerDirector – Place Videos Like Pages in a Book – Part 2

This is a simple run through showing the wide variety of tools available in PowerDirector for when it comes to color correction and video enhancement.