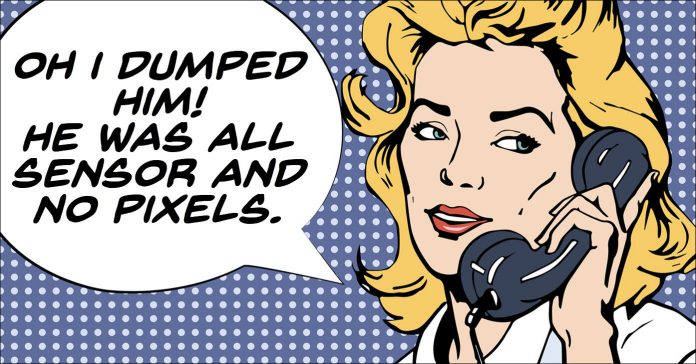 One of the really annoying aspects of choosing a suitable video camera is that the subject is a minefield of terminology.

Unless you are prepared to do a ton of research and work your way through learning another ton of technical terms and words you will get lost.

In an ideal world camera manufacturers would help you though that learning curve so you could arrive at a good choice of camera for your needs.

There are two main barriers to that concept.

The first is that we do not live in an ideal world and the second is that we have evolved (devolved?) to a point where we have a subject called marketing.

Camera manufacturers employ very slick marketing and take advantage of the fact that half the time you have no idea what they are talking about!

I have covered that subject on this site in detail here: Video Camera Marketing Tricks.

One of the places they really go to town is when it comes to the specifications of sensors.

Full Frame sensors must the the best for me because they are… well… full!

An APS-C sensor must be the one for me because it has a really technical sounding name so that’s gotta be good right?

Like most things they all have pro’s and cons and to survive as a buyer you have at least debunk the marketing myths.

The video below gives some great facts about various sensors and for more information you can check out my other post on it here: Video Camera Sensors.

The video below as is suggested by the tile is a good explanation of the way various camera movements can create a different feeling in a video.

Just to be clear here, in the video the presenter uses a pretty expensive tool to accomplish most of the shots.

The need for that piece of equipment is not really the point of the video or at least why I have included it.

The key information in the video is the various way camera movement can be used.

If you have ever been out on a foggy day capturing some videos then you would have noticed your results were… shall we say… mixed?

The simple fact that fog tends to diffuse all available light can play havoc with auto settings and even for the pro’s it presents some challenges.

Like most natural lighting situations shooting in fog will always be a “good news – bad news” scenario!

Check out the video below for some tips on turning that frown upside down when it comes to shooting in the fog.

3 Tips for Smoother Skin on Camera

Obviously the video below covers some tips for making skin look better on camera cos’ that what its called!

However main reason I have added it to this week’s Roundup is that he goes into some excellent detail on how and why certain lighting setups create desirable or undesirable effects on skin.

One of the subjects I probably bang on about to the point of boring everyone (well except for using cheesy transitions) is that of planning a shoot well in advance of actually doing it.

Most people find this concept a little difficult to think with because most people are going to be shooting things in a very “on the fly” set of circumstances.

Planning your shoot does not in any way mean that you don’t shoot on the fly and grab things as they happen.

Planning your shoot means that you work out in your mind what the final video is going to look like, then plan certain key shots that you know you will need to execute that plan.

In the meantime and on the day you can shoot whatever you want, safe in the knowledge that those key shots are going to allow you to pull it all together.

The video below is a great example of applying this concept to travel videos but in reality it can be applied to any type of video project.

The most important point to keep in mind here is that if you shoot everything you know you need for a project plus some other stuff, by the time you get to editing either of two things will happen.

First, you have more than enough usable footage to complete the project.

Secondly, you get all the footage loaded and find that your original plan was OK but because you have all that footage you have an even better project on your hands.

Hands-on Walkthrough: May 2019 Update for Windows 10

There is currently a May update for Windows 10 lurking about in the bushes which you may or may not have received at this point.

Given the fact that most people reading this blog are actually on that system now I thought it might be handy to include a video of what’s new in this update.

Most of it to me is all very meh, but the one thing I do like is that you can now wrest back control over how and when future updates are downloaded and applied.

Under the old system you would be working on something and all of a sudden Windows would cheerfully announce that updates were ready and your machine was about to re-start… Yikes!

Sure you could choose for that not to happen and continue what you were doing but the problems started if you weren’t sitting in front of you computer at the time.

On two separate occasion I have gone off to do something with a project active on the computer, walked away to do something and returned to find that my computer was half way through updating itself.

On some of the bigger updates this meant having to wait quite a while for it all to finish topped off with that nervous moment when you reopen the project to see if anything was lost.

In all honesty that’s not really the kind of excitement I need in my life.

OK this is a trick I have never seen before and it is kinda cool!

Sometimes when you are shooting video you may inadvertently get unwanted flicker in that video for a few reasons.

Sometimes it has to do with your frame rate clashing with the hertz rate of lights or something like that.

The video below covers a neat little trick you can do in just about any video editing software that allows for you to set the opacity of a video track on the timeline.

This one is done in PowerDirector but most editors can probably handle it.

This is a detailed walk though of how to get a bit fancy schmancy with the PiP feature in PowerDirector 17 using multiple overlays and the design tools to change the shape of the PiP videos.

Just started this week the guys at VegasCreative have set up a new FaceBook page for users.

The general target for the group are people using Vegas Pro and Vegas Movie Studio so if you are using either of those editors why not go over and check it out to see if you would like to be a part of that community.

CyberLink PowerDirector – How to Add Title/PiP Following a Moving Object

I really like these fast tutorials form the guys at CyberLink on performing specific tasks in PowerDirector 17.

They have a bunch of longer format tutorials on their channel but these “quickies” are great for reminding yourself how to do certain things because you haven’t done it for while and need a little refresher.

Apparently all those really good reasons why Instagram refused to accommodate landscape videos sticking strictly to the portrait aspect ratio turned out not to be true!

Well at least for IGTV anyway. Now you can add landscape videos and they won’t be butchered into portrait.