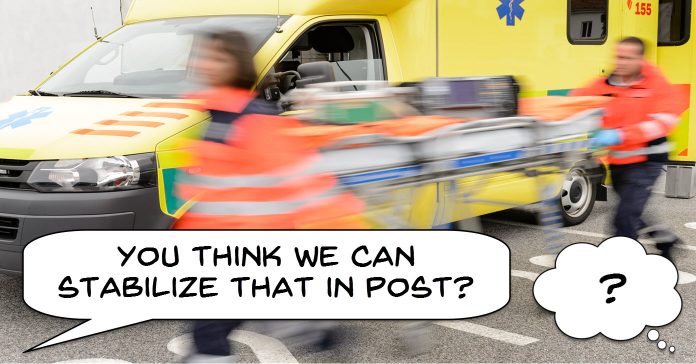 Remove the Shake, Stabilize your Video in ProDAD Mercalli

One of the features that is often called for in these days of mostly high definition shooting is that of video stabilization.

The downside of HD is that every tiny little shake or bump that occurs while shooting gets magnified by the higher resolution in the same way that it is totally unforgiving of being out of focus.

Naturally most people think that there must be a software solution to this so that it can be handled in post production but that is a risky proposition at best.

The absolute best video stabilization occurs at the shooting stage, not the editing stage!

Of course dragging around a tripod or even a monopod for many of us is not a realistic solution so inevitably we have to fall back on the software.

So often I see footage that employs what we call the garden hose or fire hose method where the shooter is waving the camera around all over the place.

The usual reason for this is that the person shooting has forgotten they are shooting the action and have begun to watch the action.

So if we are down to software stabilization there are some good tools around that are usually packaged within a particular brand of software.

Most of the big companies have now pretty much abandoned their own in house stabilization modules probably due to the costs involved in trying to keep it developed and up to date.

The most common one around is the stabilizer from ProDad called Mercalli.

This is an excellent stabilizer but like most modules that can be controlled very finely, you have to know what you are doing!

The video below is a tutorial on using Mercalli in version 9 of Corel VideoStudio.

The process outlined is the same for version 10 and in fact would be the same for any software that has the Mercalli plugin.

Some Editing Rules to Learn and Break

One of the easiest ways to decide when and how to cut from shot to shot of from scene to scene is by working out a rhythm you want to set for your video.

The rhythm can be determined by conversation, the action your are presenting, the music in the background or conversation.

Making your cuts to set and suit that rhythm determined by one or more of those factors can serve to engage the audience more closely.

If the shots and the music or the shots and whatever else are changing at the same pace the tendency is for the audience to just “go with the flow” whilst watching what is on screen.

To get an idea of how this works just watch the short but very insightful videos below to further understand how it all works to serve your purpose.

The second video is the follow up to setting the pace using rhythm and delves into the subject of breaking that exact rule!

As is always the case with video, once you learn to follow the rule it is time to learn how to break it to create yet another effect.

A Little More on Editing

There seems to be a bit of a theme emerging on this week’s Friday Roundup and that theme is the when, where and why’s of cutting.

In the article below the author goes into quite some detail on exactly what things are driving the editing or cutting decisions he is making.

Now the article itself deals quite specifically with a certain type of project and in all honesty most people reading this blog post would probably not be doing that type of project.

However the thought process behind the decisions remains pretty much the same and I think there is a good deal to learn regardless of what type of video your are cutting.

So I was watching the CyberLink webinar this week and it suddenly dawned on me that I have never actually shared this little nugget of information in the Friday Roundup before.

Not really sure why that has happened!

Anyway the deal is that CyberLink regularly host webinars on YouTube where they demonstrate in great detail how to do certain things in PowerDirector or how certain functions… function!

They really are great webinars that expand on the already comprehensive library of tutorial videos they already have on their channel.

Attending these webinars live can be a bit of a grind because often they go for over an hour, however they upload them to a playlist on their Channel and it’s an excellent resource in itself.

Each of the uploaded videos has a comprehensive list below the video that shows what subjects are covered within each webinar.

You can find the playlist itself here CyberLink Webinars.

The video embedded below is the latest of these webinars and covers:

So if you are looking to take your skills to e new level or are trying to workout how a particular thing is done you might want to add these webinars to your resources list.

To Zoom or Not to Zoom

When it comes to shooting video especially at an amateur level the general rule for zooming is to just NEVER do it.

Simply DO NOT touch that zoom function under any circumstances… “ma’am, step away from the zoom!”

Apart from the fact that the cheesiness factor can immediately go through the roof when you do use zoom there is the added disadvantage of introducing camera shake when you do.

So the actual rule is to zoom with your feet.

Of course for every rule that exists in the world of photography, shooting video and video editing there is another rule that says to break the rule!

The trick is to know when and how to do so.

Check out the article below for not only a good background on the use of zoom through the years but some good advice on when it may be a good idea and when it may not.

Over the past few years German based multimedia software maker Magix has been quietly trying to raise its profile in the world outside of their traditional base in Europe.

They have been slowly beefing up their resources and online tutorials and early last year took the giant leap of purchasing the entire Sony Creative stable of video and audio editing suites.

Just recently they released the first new version of their Movie Studio program aimed at the consumer to semi-pro level after having already upgraded Vegas Pro late last year.

This week in another step towards a more “worldwide” market share they announced a complete revamp of their online Forum/Resources portal magix.info.

So if you are already a Magix user or are wisely considering the value of a good forum in your choice for a new editor it is well worth taking a look at.