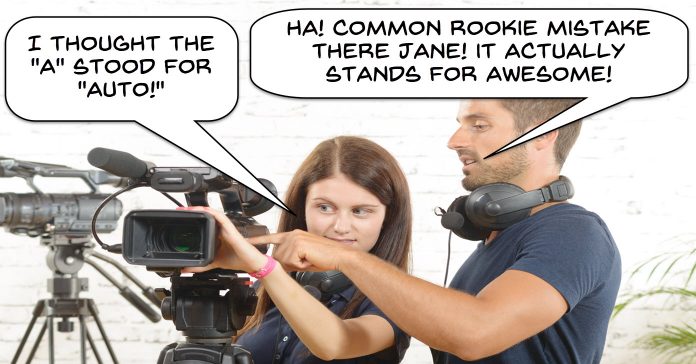 One of the key steps you can take if you are looking to up your video game and lift it out of the “home movies” level is to start shooting manually.

Most people tend to remain locked into the auto settings of their cams which includes auto-focus and everything else.

In many cases that’s actually just fine and in the case of shooting fast, it is almost essential.

On the other hand there may very well be times when you have the luxury of manually setting your camera and it will very often be these kinds of shots that separate you from the pack.

The first is understanding what those settings are and how they will affect your shots.

The second is getting completely familiar with those settings and being able to access and apply them quickly.

The second point takes practice and the first point will take a little study.

The main settings to begin with are shutter speed, aperture and ISO and there are many, many video on YouTube as well as articles on the internet explaining them and their relationship to each other.

However as is the case most of the time when researching or trying to learn something online, most of those videos and articles are either too technical to begin with or explain the subject poorly.

This week the guys at Filmora put up a video explaining these factors and I have added it to the weekly Friday Roundup because it covers the subject very well at an introductory level.

Although this tutorial is done in Adobe Premiere it applies to and can be achieved in just about any video editing software.

The bottom line is that the software is not the defining factor here.

One of the great things you can do with 2K or 4K video is add it to a project that has been set at a lower resolution like 1080 but is still high definition.

The addition of 2K or 4K footage allows you huge control over the pan and zoom aspects of using them without the downside of losing any resolution in your project.

A few weeks ago I added an article on the subject of using drones for shooting your videos.

The point of that article was to illustrate that although it may seem quite exciting to use these new devices for video, there remained one thing that most people were ignoring.

That point was that until you learned to fly the drone effectively it was quite certain you were never going to get anything decent from it and even more likely that you would crash and burn it in the process!

The advice I gave in that article was that if you are considering getting into using a drone for your footage the first thing you should do is to buy a really cheap, simple drone and learn to fly it very well.

In fact you don’t even need to buy a video equipped drone to begin with.

Just a cheap quad-copter (and I’m talking $10 here!) that would allow you to get it flying well with good control.

That way you can have a few crashes and still not break the bank.

So if you have done all that and have turned yourself into a drone flying ace the next step is learning how to get specific shots with that drone.

The video below covers a few of the basic shots you need to master to make decent use of drone footage.

OK be warned! The title of this tutorial contains the term “in 60 seconds” so be prepared to stop and start few times to get it right!

The tools being used in the video are available in most video editing software under the color correction part of the program.

It shows quite clearly how just dropping out the saturation of a video does not really achieve a de-saturated look that is at all pleasing.

Pay attention to the tweaks he performs after dropping down the color levels to bring back the highlights.

Since Magix bought out the entire Sony Vegas line of products a few years back they have been very actively developing the software in conjunction with its substantial user base.

It is however interesting to note that many of the features they have been adding Vegas Pro are features that you and I at the consumer level of the food chain would consider to be no-brainers!

It illustrates quite clearly just how disinterested in the software Sony had become.

For example with the latest release they have added motion tracking… really?

It didn’t have that before?

Also they are excited to add stabilization… again, really?

Anyway if you are looking to go up a level or three with your video editing then Vegas Pro more than ever represents a pretty solid choice.

You can check it out for yourself here.

Last week Corel released the latest version of Pinnacle Studio taking it up to number 22.

One of the main reasons why anyone would choose pinnacle Studio 22 over any of the other perfectly good video editors around these days comes down to what is probably Pinnacle’s main point of difference.

That point is the level of control Pinnacle offers as opposed to the rest.

The video below is a perfect example that.

Most video editors will offer some kind of split screen effect, some of them may even allow for a wide variety of templates you can use to design those split screens.

Moving up the food chain there are others that even let you design the templates for split screen… and then we come to Pinnacle Studio 22.

Not only can you design your own templates for split screen but you can add all sorts of motion to them as well.

One of the easiest ways to add interest to any project is to get your camera moving as opposed to getting your subjects moving.

The article below goes into some common bread and butter moves that the pro’s use and by at least thinking about how you can incorporate some of them into your projects you should be able to see improvement.

Remember that some of them at the amateur level are going to be totally impossible unless of course you are going to hire a camera crane for the day!

Adding Energy by Expand or Shrinking Elements with Keyframes

Oftentimes when putting together a project you may have sections that lack any sort of dynamic appeal to them and when set against more motion packed sections look even worse.

One way you can lessen that difference and inject at least a little excitement into them is by using key frames in conjunction with overlay effects.

It is similar to using pan and zoom effects but just a little more tailor made.

The video below in another tutorial showing the procedure in CyberLink PowerDirector but as always, your particular video editing software will most likely have the same controls.

PowerDirector – Move a Spokesperson to Make Room for Titles or Images

Generally speaking if you are going to shooting video of a person speaking and intend to add text to the final video you would shoot with that in mind.

You would either frame the speaker to the left or to the right or wherever so that you space for the text.

However if you already have footage shot that has not really been shot with that in mind there are ways to get the speaker out of the way so you can add you text using layers and other video tracks on the timeline.

The video below is a simple run through of that using PowerDirector but most video editing software can do it in exactly the same way.

How to Give Your Film Visual Rhythm

Another unseen element that separates the amateurs form the pro’s is rhythm.

I say “unseen” because for mos,t rhythm is not really something they would be aware of as an element when watching a video.

You have probably experienced problems with rhythm when watching an amateur video but in a similar way that bad audio adversely affects your viewing experience, rhythm does the same thing.

When there is a lack of rhythm in a video the audience will feel a sense of time passing slowly and nothing happening regardless of what is showing on the screen or vice versa.

Another obvious one to look for is the feeling that time or events are jumping too fast or too slow (or both!) in relation to what is being seen and any story that is unfolding.

One of the most subtle ones you will see that is very prevalent in amateur home movies is the one where there is background music that plays at a certain tempo yet the editing cuts and lengths of clips bear no relationship to the music.

That one in particular is a good way to see how although the audience knows something is wrong, they can’t quite put their fingers on exactly what it is.

I am yet to be converted to the (supposedly) wonderful, wacky world of 360 video.

I am not going to hide that fact.

I guess I will always be a bit of a Luddite in that regard when it comes to the latest and greatest wizzbangery on offer. (Yes! wizzbangery is a word! It must be cos’ I just used it!)

Anyway I thought the video below was pretty interesting not because it is all 360 and stuff but because it shows some interesting effects you can achieve using 360 degree footage.