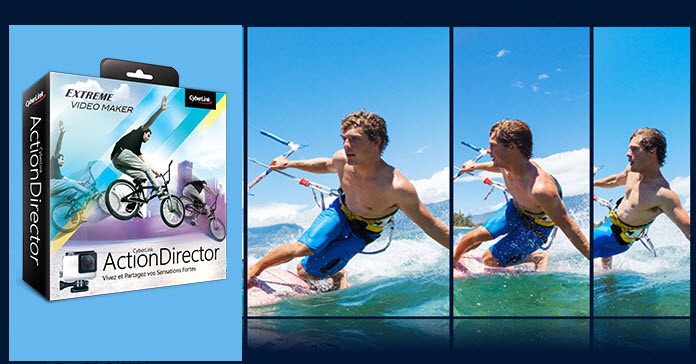 It has probably been over the past two years that all the major editing software companies have been incorporating more and more features into their mainstream products aimed at this style of footage capture and short sharp editing style.

In fact most of the features that make up the Action Director program were introduced into PowerDirector this year or last in response to that consumer demand.

At the time this was all happening I thought that it was a pretty smart move on CyberLink’s part because the market in action cams has exploded and to be realistic about it, most video captured on mobile devices pretty well also falls into this category.

However I also thought at the time there would have to be a large number of users who simply did not want or really have a need for a fully loaded editor like PowerDirector.

Although I am sure some could be enticed into getting that program, many would avoid it and instead opt for a free yet underpowered app of some description.

As it turns out it seems CyberLink have been onto this as witnessed by this new release.

Coming in at around 50 dollars U.S the program is packed with features that would appeal to that market and contains no real fluff.

I’ll do a full review… one day… when I get the time!

Great roundup style video from Video Creators this week covering a couple of quite important issues on YouTube.

Probably the most important of these being YouTube’s ongoing attempts to strike a fair balance between Fair Use of copyrighted material and just plain old copyright violation.

Not an easy task at the best of times but for YouTube, given the sheer quantity, an almost impossible one.

Originally they were using a sort of sledgehammer approach on anyone they even suspected of violating copyright but in the process were suffering a pretty hefty backlash from users.

The problem for them was that many copyright owners were just automatically asserting violations in large numbers relying on YouTube’s difficulties with regards to evaluating each claim.

A few months back YouTube eased up a little and indicated that they were not going to just pull down content because someone “claimed” a violation had occurred and were going to try to offer at least some kind of moderate solution to the problem.

Finally this week I managed to find a video that is actually a tutorial with a clear cut message of something to learn… woohoo!

So this video goes into the audio recording module of PowerDirector but bear in mind all software has this or at least something that looks like it.

I think it is a great video to watch to get and idea of the whole setup because recording through any software interface on a computer can get a little strange, very fast.

The reason for this is that Windows has its own inbuilt audio settings and capabilities so the software you are using has to interact with that.

Sometimes getting the whole thing set so that everyone is on the same page can get a bit confusing.

This video shows how that whole interface works and how to get it all going smoothly.

Audio Advice from a Master

Over the past couple of weeks and in fact quite regularly in the Friday Roundup I have referred to articles or videos regarding the subject of sound or audio in video projects.

There is always that oft quoted cliche that the most important part of video is audio and it really is such a basic truth it always bears repeating.

When it comes to master filmmakers and what we can learn then it doesn’t often get much better than Orson Welles.

Check out the quote below to see just how importantly he regarded sound and how intimate he considered the relationship between sound and visuals to be.

“I think that if (a film) sounds wrong, then it doesn’t look right. Movies depend so much on rhythm.

They are so close to music, closer to music than a drama of the theater, that if the sound, and the rhythm of the sound, above all the rhythm, is wrong, no image can save it.

Because the rhythm of the sound… I believe sound is the first human sense for the theater, not the eye.

It’s not only what you say, but the rhythm and speed of all the voices in a scene. That’s why often when I direct, I turn my back on a scene.”

OK now unlike the video I posted below on using a game controller instead of a keyboard for editing (which at least can be tenuously linked to some kind of video editing tip or lesson) this has nothing!

This is pure geeky YouTube stuff but kind of fun anyway.

I generally find out about Easter Eggs on various services like Google and YouTube but very often instantly forget them so this week here are a few weird and wonderful things you can find on YouTube if you know the right search operator or function.

Use A Game Controller As An Editing Surface!

OK before you check out the video below let me issue a little warning!

If there was a “geek factor” scale that ran from 1 to 10 then this one would definitely be a 10!

If you are a beginning editor or are at least still learning your way around the interface and actions of whatever software you have, don’t get into this.

Think of it instead a simply a geeky video showing a cool trick that none of really need to do!

Having said that there is an underlying message that is worth noting about the video and its contents.

One of the best ways to take the drudgery out of editing because of its repetitive nature, is to learn the keyboard shortcuts that are natively built in to your program.

All video editing software has them set up in a default manner and if you just take the time to learn them and start using them you will cut your editing time in very short order.

Believe me, any pro editor would be using the mouse on their editing computer very, very rarely.

They all use the keyboard to carry out their editing actions.

In fact they take it one step further and actually map the keyboard shortcuts to suit themselves which is something you can do as well.

So next time you are editing and realize there is an action or step that you keep repeating on a regular basis, stop and find the keyboard shortcut for that action.

Once you have found it ask yourself if that shortcut is in a position that if you practiced, would speed your process.

If not, then go into the settings of your editing program, find the module for keyboard shortcuts and set that action up under a part of the keyboard that you think would suit you.

As a little tip on this try to map common actions to key on the left hand side of your keyboard.

Most people have the mouse on the right so that way you can mouse with your right hand and use the keyboard with your left.