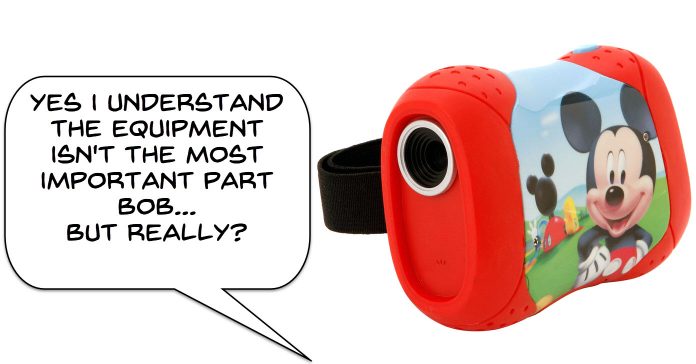 The world is saturated with endless marketing that repeatedly conveys the message that the problem is that you don’t have this or that latest thing.

This is patently false. Full stop end of rant.

Over the years I have had so many questions put to me by readers asking whether this software or that camera or piece of equipment will improve their projects.

My answer is pretty much always the same.

When you have exhausted all possibilities with whatever you have and have gained the knowledge yourself to be certain that what you have can’t do what you want… then you can upgrade to the next big thing.

Until then what is most likely holding you back is knowledge, practice, experience and imagination.

That’s why I love these videos that the DigitalRev guys do occasionally.

They take the most ridiculous camera, put it into the hands of a talented video maker and without fail end up with an amazing result.

I think the last time they did it they were using a toy BarbieCam, this time the camera is just as awful and the video maker is Brandon Li.

I have never been particularly interested in 3D videos or 360 video for that matter and it is generally a cold day in hell when I do post something about it… until today.

For me these newly emerging technologies always seemed a bit half baked and a bit cheesy so I have never really gotten on board with it all.

To be honest I was much like the guy in the video below but after having watched that video I have seen the light!

I may not really be totally on the bandwagon when it comes to creating 360 movies quite yet but the idea of using a 360 camera to create 2D videos is all kinds of awesome!

LUTs seem to be all the rage just lately with most of the decent video editing software at the consumer level introducing them as a capability.

The problem with features like this that filter down from the pro end of the market is that they suddenly appear without any real understanding of their place in the post production chain.

Of course the advertising is just “use LUTs” and your color grading will automatically look cinematic… whatever that means!

So in order to understand them and the whole color correction and grading process check out the workflow video below.

As a cautionary note the techniques are being demonstrated in Adobe Premiere Pro and in the first section the guy uses a plugin to do the initial color correction.

Don’t be put of by that.

All that plugin does is emulate the color correction tools offered by most fully loaded video editing software.

One of the hardest things to try and work out when you first start getting into editing is to know what you are supposed to be doing in the first place!

The first time I ever opened an editor I kind of figured out that I needed to somehow get my assets into the thing… sort of but from there I had no idea what to do.

After a lot of trial and error I finally worked it all out enough to get started but then inevitably found that I was going back to do things I should have done earlier.

I also found that because of the order in which I was doing things I kept messing up sequences and sections of the video in relation to to other things.

For example I would get all the audio lined up and then maybe add some transitions.

Having done that and feeling mightily pleased with myself I would then discover that all the audio had gone out of sync because I had added transitions!

That meant going back and redoing the audio and around and around I went.

There are probably a million little differences in the ways that experienced editors approach the order in which they tackle the overall job but in the video below there is a sensible approach to the job which I quite like.

The YouTube algorithm is a highly complex piece of programming that pretty much determines the fate of your videos and channel on YouTube.

It would be physically impossible for YouTube to manually sort, evaluate, categorize and prioritize the millions of videos there already let alone the one being uploaded every second!

So the answer to this is the algorithm and if you want to achieve any sort of exposure on YouTube you are going to have to understand what that algorithm likes and does not like!

The problem is that it is an evolving thing that is in some way “learning” as it goes along based on community feedback, needs and reports.

For a roundup of the current state of the algorithm check out this video below from Derral Eves who is one of the better experts on the subject.

Getting Your Videos Online

In my opinion there are roughly three levels of transitions that anyone can use in their projects.

At the bottom of the heap are those preset or pre-programmed transitions you find in just about every brand of video editing software.

At this level you are looking at transitions that are boring or mechanical at best or downright annoying and distracting at worst!

If we go up one level we have those same transitions but instead of just inserting them into a project we can tailor them using their settings to more appropriately suit the task at hand.

By just lifting yourself up to this level you will also be lifting up the quality of your projects quite noticeably.

At the top of the scale are transitions that have been completely manually created for that specific cut in the project.

These can be simple like wipes created using available footage going all the way up to a transition that has been planned at the shooting stage with footage captured specifically for that purpose.

In the video below you can get an idea of just how much can go into a transition and the effect it can have.

At the same time you can also get an idea of how an annoying pair of presenters can make is it really difficult to get through a video tutorial like this!

PowerDirector – Tips to Speed up Editing with Keyboard Shortcuts

One of the downsides to video editing when you begin to engage in more and more complex actions is that it can very quickly become incredibly tedious!

Some people seem to really enjoy that kind of activity but for me personally.. not so much!

The best way to break that tedium is to go faster but the way in which we are introduced to video editing software makes that a little hard and here’s why.

In order to sell video editing software the makers of the software have to overcome the buyers initial difficulties on learning how to use it.

They generally deal with that problem by designing user interfaces that rely on what the new user is most likely to be familiar with and the big one is the concept of pointing and clicking with the mouse.

That’s why you see most video editing software presented in a sort of “point and click,” “drag and drop” your way to cinematic success way.

It gets people over that initial hurdle of getting started.

Unfortunately that very same “point and click,” “drag and drop” method is the one that a little down the road, becomes the main source of going slow.

Pro editors just don’t do that even though there is nothing particularity different about the software they are using.

What the pro’s rely on for the vast majority of the actions they are doing is keyboard shortcuts.

Every editing software I am aware of actually has keyboard shortcuts but generally they are not mentioned too much despite their importance.

The real key to getting faster as an editor and cutting down on that creeping tedium is by learning to use the keyboard shortcuts built in to your editing software and even mapping your own shortcuts to suit your workflow or style.

In the videos below you can see some of the shortcuts available in PowerDirector but the brand is irrelevant, they all have them.

Using those shortcuts will make you faster in the end but to begin with they may seem a little clunky. Just persist and quite quickly you will get up to pace and start flying!

PowerDirector – Tips to Speed up Editing with Keyboard Shortcuts – Part 2