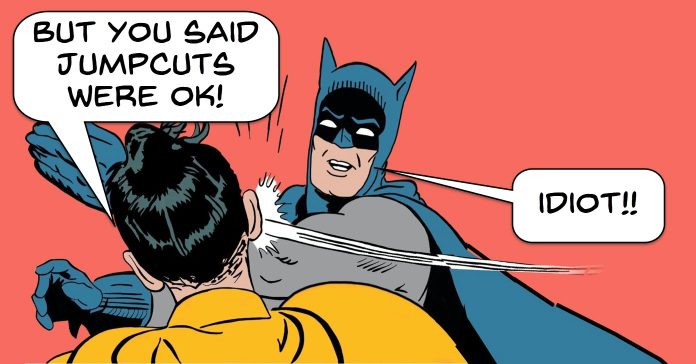 How to Use the 30° Degree Rule

There will be many times in any video shot by an amateur that you will see that something is wrong and you will have no idea what it is.

One of the most common ones is that in shooting the video the shooter has broken the 30° rule.

Of course if you don’t know what that is in the first place then you are probably going to break it!

So to get yourself up to pace on this one just check out the video below for some good explanations of what it is and the effect it has.

As a word of warning here it is a good idea to keep in mind that many modern videos, especially on YouTube intentionally break this rule for a particular effect.

This one is pretty much no different to any other rule in video.

Learn about it, learn to use it, see how it works then work out if maybe breaking it intentionally might serve a purpose!

Just click through below and you will be whisked away to the world of Shutterstock where they are giving a bunch shapes and backgrounds and stuff you can use in your projects.

This week Shutterstock announced the addition of a totally new section of their vast array of royalty free images, videos and audio assets.

The new section is called Elements and already contains a significant amount of video effects, lighting effects and well…. elements!

All of which you can use in your projects for pretty reasonable pricing.

Here’s a taste of what they are offering.

How to Shoot Epic Handheld B-Roll – Behind the Scenes

This one is a great tutorial providing a step by step walk-though for shooting B-roll footage for your projects.

Now most of the time B-roll will be of a more general nature but this one differs a little in that the B-roll is being shot for the purpose of putting the video together in a specific way.

It is an interesting take on getting b-roll as well as using it in a project.

3 Steps to Telling a Captivating, Unscripted Story on YouTube

This is a great video from Tim Schmoyer from over at Video Creators.

Whenever I add one of his videos it is usually because he has provided some kind of major or basic tutorial on running a channel on YouTube.

In fact he is one of only three or four people I tend to refer to when it comes to YouTube.

Now the video below was one I started watching and kind of figured I wouldn’t include it because the title suggested something quite advanced and specific which is what I wouldn’t normally post.

However in watching the video it suddenly struck me that what he was teaching was would actually be a prefect template for shooting just about any video on the fly.

In the video, like many of us, he is actually on an outing with his kids and what is known is that there will most likely not be any real prediction as to what action will occur.

But by using the structural rules he suggests you have have a clear guide as to what you need to shoot so that later in editing you have something to work with.

How to Edit Videos with the YouTube Video Editor

Over the years I have always found the YouTube editor to be quite limited and rather clunky to use.

In fairness though YouTube have been constantly developing it and although these days it is still kind of limited it is a great way to polish up existing videos and add a few features.

Bear in mind that once you have uploaded a video, that video is assigned a URL or address and there is no external way of changing it in any way.

To do that you have to remake the video then upload it again in which case YouTube will give it a new address.

So the YouTube editor really is the only way to adjust a previously produced and uploaded clip.

If you find yourself in the position where you need to do something like that then a good understanding of the editor itself is a good thing to have.

In the video below they cover the basic editing functions of the YouTube editor.

One of the first things the average home movie maker discovers is that more often than not the audio they have recorded using their camera is pretty awful!

Not always, but quite often.

From there they quickly learn the joys of covering up that bad audio with some background music… or in the case of really bad audio, foreground music!

However to leave it at that is to waste some pretty good opportunities to improve even further.

The power of music in any video project cannot be underestimated and if used well can completely change the way someone views that video.

So check out the video below on some of the basic ways you can use music to manipulate your audience.

Kicking around somewhere on this website is a tutorial I did some time back on how to clean up a voice track using Audacity.

In fact you can find that tutorial HERE.

If you are not familiar with Audacity it is a free open source multi-track audio editing and recording program that has been actively developed for over 19 years now.

You can download it for yourself by clicking the link here: Audacity Audio Editor.

It is cross platform so just choose the one suitable for your system.

Anyway getting back to that tutorial.

One of the steps in that process is to take a sample from your existing audio in order to remove background noise.

In the video below there is a similar tutorial but this one concentrates a little more on the background noise step and suggests a slightly different way of going about the process.

In the most recent version of CyberLink PowerDirector 17 they made a pretty big change to the audio controls in the software and like most big changes there were happy faces and sad ones in the user community!

Previously PowerDirector offered pretty much the same kinds of features and controls offered by all the rest in the audio department.

It was “OK” but nothing to write home about.

To compensate for this they always included a standalone program called WavEditor which in many ways looked a lot like the free audio editing program Audacity.

It did however extend the kind of control you had over audio for your video projects and was one way that CyberLink separated itself from the pack.

Of course over the years many users grew familiar with it and were comfortable using it.

Last year Cyberlink decided to ditch that extra program and include a vastly extended audio module integrated into the main program itself.

Personally I preferred this new arrangement but a few of the “old hands” were a tad grumpy!

Anyway this new module offers a lot more features so to get a look inside it if you are not using PowerDirector check out this video for a sneak peek.

I get a lot questions sent to me through this site and from some of the work I do on a few of the software forums I help out on.

Generally there questions start out as “I have problems with this or that software.”

More often that not they actually end up as being problems related to computers and computer resources.

Editing HD these days in unbelievably resource intensive and if you really get to understand what the average computer has to do in order to edit that HD video you would see why.

In light of that there are often discussions around the subject of what exactly is needed to ensure a smooth editing experience.

More and more these days there is a lot of the workload being placed on to the graphics card and it’s resources.

So to maybe help out with that here’s a fairly plain English rundown on graphics cards, their features and what each level of card is suitable for.

One of those is the “Themes” feature which comes with pre-made starts, middles and ends for projects and as it suggests is based on a particular theme.

Most of them also come with included music suitable to that theme.

Personally I don’t ever use this feature as it is presented because it takes just as much time to de-cheese the project as you save making it!

However there is one very handy way you can use these themes especially if you are making similar videos over and over again.

A good example of this would be a weekly vlog post you make to YouTube where you want the opening titles and sequence to always be the same.

To allow that PowerDirector also offers as part of that whole “Themes” module a separate designer section that allows you to completely tailor a theme however you want or even create one of your own you can then save and re-use over and over.

Check out the video below for a look at the theme and the sort of control you can exercise over it.

You can read my review here: PowerDirector 17